Two of the biggest albums of the year – Adele’s ‘30’ and Taylor Swift’s re-recording of ‘Red’ – won’t be up for ANY awards at the next Grammys. Here’s why.

There’s no need to start a petition. There’s no need to get #JusticeForRed trending on Twitter. There’s no need to create a backlash against The Recording Industry over a major snubbing. Yes, the organization is going to roll out the nominations for the 64th Annual Grammy Awards today (Nov. 23), and yes, neither Taylor Swift’s Red (Taylor’s Version) nor Adele’s 30 won’t be nominated for a single award. However, this isn’t due to a clerical error or a secret conspiracy against these two musical powerhouses. The reason why neither Red (Taylor’s Version) or 30 will be nominated for the 2022 Grammys is that they aren’t eligible yet.

The eligibility period for the upcoming Grammy Awards is September 1, 2020, to September 30, 2021. That means that for any music to be considered for the forthcoming Grammys – taking place on January 31, 2022 – it had to come out within that frame of time. Adele just released 30 on November 19, 2021, which was why it will seem like The Recording Academy forgot about it when they announce the nominations at 12 pm ET today. However, expect it to pick up all the nominations when the 65th Grammy nominations are announced in November 2022. 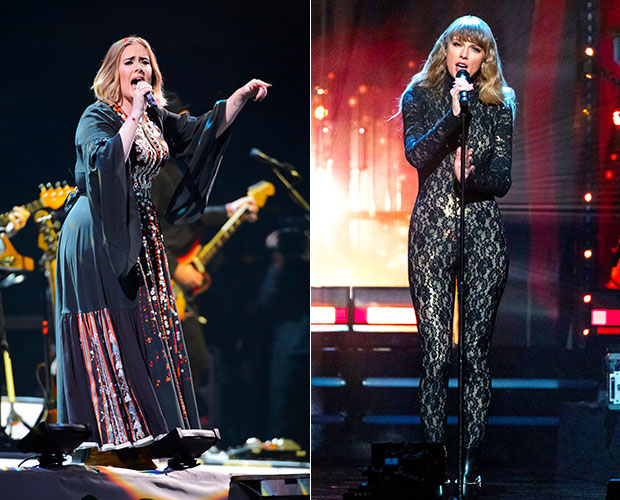 Adele Then & Now: See Photos Of The Singer's Transformation

“Fearless has already won four Grammys including Album of the Year, as well as the CMA Award for Album of the Year in 2009/2010 and remains the most awarded country album of all time,” the rep added. Taylor wished to submit evermore in all eligible categories, and she’d rather voters focus on her new material than possibly split their votes between the two projects.

While Taylor withheld the re-recorded Fearless from consideration, the same might be not be said for Red. While the original Red was nominated for Album of the Year and Best Country Album for the 56th Annual Grammy Awards in 2014, it walked away with neither of the awards. Taylor lost Album of the Year to Daft Punk’s Random Access Memories. The Civil Wars (remember them?) beat Taylor, Keith Urban, and Tim McGraw for Best Country Duo/Group Performance. She also lost Best Country Album to Kacey Musgraves’ Same Trailer Different Park.

Considering how Red (Taylor’s Version) has reached critical and commercial acclaim – Rolling Stone gave the new version five stars, and it sold half a million units in its first five days of its release – she may submit it for consideration. That could mean a Taylor Vs. Adele battle in 2023? HollywoodLife has reached out to Taylor’s camp and will update this post when information is made available.