Once upon a time, your email inbox was a magical place.

Each new message was a real treat – whether it was a lengthy letter from a long-distance pal or a sweet little e-card.

Then emails became the main means of communication at work, and everything started going wrong.

Remember how when you were young, an envelope in the post was exciting, but as you got older, it became a cause of dread or boredom; likely to be another bill?

The same sort of thing happened to emails.

Emails went from a way to chat with pals to terse missives from your manager, mixed in with endless promotional messages, and inbox arrivals that appeared only to be deleted.

We started to obsess over our email linguistics (how do you sign one off? Does this need more exclamation points?), then got introduced to all the ideals of a ‘good’ emailer – someone who responds quickly, whose inbox has no unread messages, who only sends things within working hours.

Soon enough, emails were taking up a significant portion of our brain space, snatching at our attention with every notification and oozing guilt as we knew that unreplied-to emails were lurking within.

These days, emails are taking up far too much of our time and energy. They’re leaving us stressed out and desperate for an escape – but then prompting FOMN the second we turn on an out-of-office.

How did we get to this place? And how on earth can we start to break free?

Why emails take up so much mental space

‘There’s a lot going on with emails,’ Becca Caddy, the author of Screen Time, tells Metro.co.uk.

‘Firstly, they tap into the same variable reward mechanism that makes us so hooked on checking social media and looking at notifications.

‘Because they’re unpredictable, many of us wonder whether there’ll be three positive emails waiting for us, none at all, or six that all contain bad news. That uncertainty can be really compelling.

‘But our attitude to emails is also weaved into broader ideas and beliefs about work, availability, communication and even fears about money and self-worth.’

You’ll see in the way we deal with emails a lot of fear around how we’re perceived. We’ve created the idea that being ‘on top’ of your emails means you’re productive, organised, good – and thus that if you’re drowning under the strain, your inbox bursting at the seams with emails you haven’t even had time to glance at, you are bad.

It’s not that email technology itself is evil – it’s what we’ve done with it. 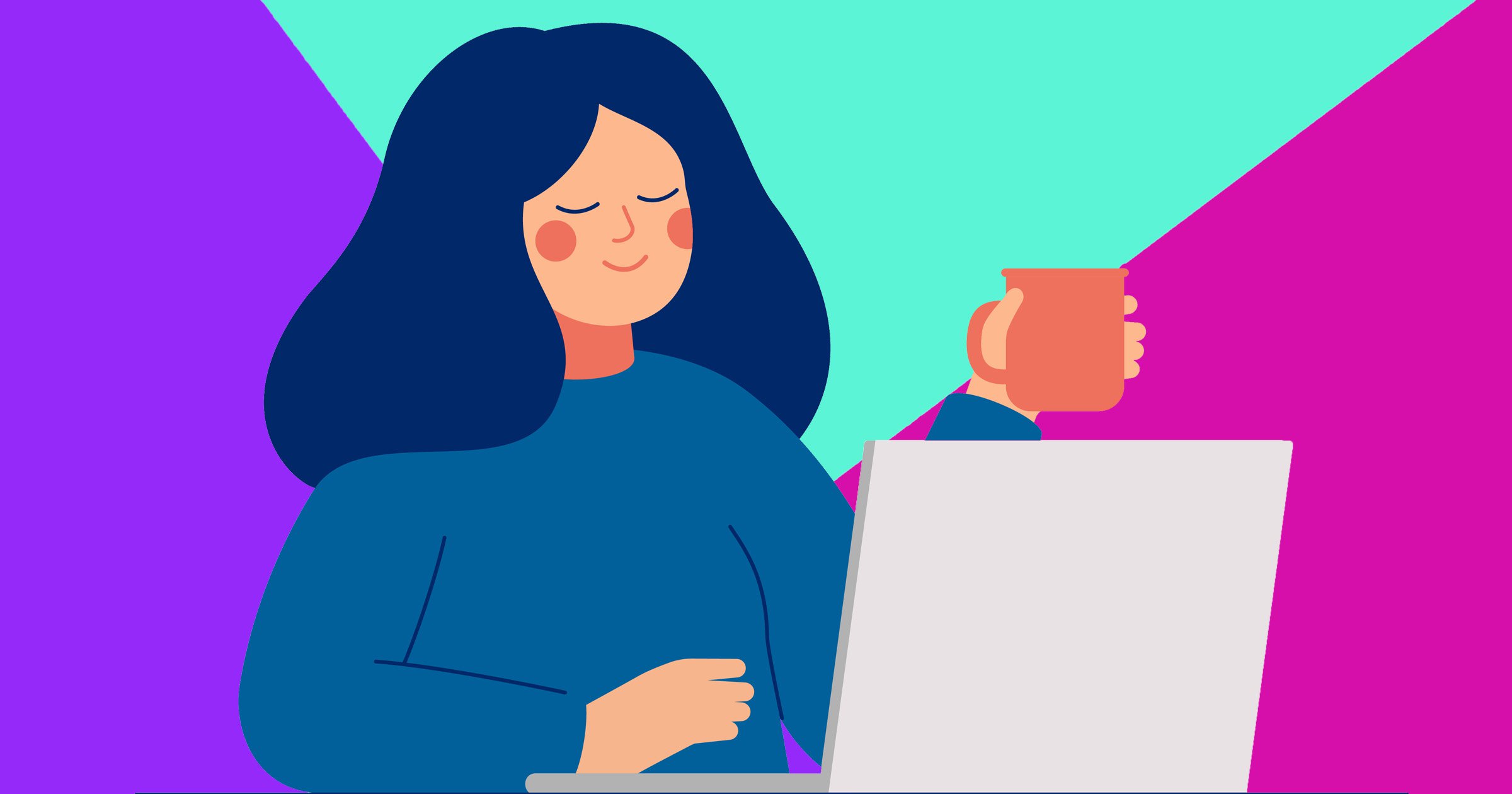 Cal Newport, the author of A World Without Email, explains: ‘Email originally spread in the office context in the 1990s as a cheaper and more flexible alternative to three main forms of asynchronous professional communication that dominated at the time: fax machines, voice mail, and memos.

‘It remains a much cheaper and more flexible alternative than these technologies, and therefore a good technology to deploy.

‘The villian in this story is the hyperactive hive mind workflow that email enabled after it arrived in the office. It’s this workflow we must combat.

‘After email spread through offices we began to use it to implement a new mode of collaboration in which we work things out, on the fly, with ad hoc, unscheduled back-and-forth messages. I call this the hyperactive hive mind workflow.

‘Once this workflow becomes dominant, you have no choice but to continually check your inbox as there are always dozens of concurrent back-and-forth interactions unfolding that you need you to tend them.

‘If you start ignoring your inbox for long periods, lots of these interactions slow down intolerably, which will upset your collaborators: so we must return our attention to the inbox, again and again.’

And the issue with that constant email-checking? It’s not remotely conducive to actually getting good work done.

‘The primary issue with a workflow that requires constant inbox checks is that each check initiates a cognitive context shift, and these shifts have a profoundly negative impact on your ability to think clearly,’ says Cal.

‘It might seem innocent to glance at your inbox for just 60 seconds because you’re looking for an urgent message, but that one glance can initiate a context shift that reduces your cognitive capacity for the next five to ten minutes once you return to your main work.

‘If, like most knowledge workers, you check inboxes or chat channels at least once every six minutes, you are basically constantly in a state of reduced capacity and will probably burn out by early afternoon.’

That’s… not great. So, what can we do about it?

Tips to break free from the endless stress of emails

Don’t be so hard on yourself

‘If you’re constantly beating yourself up about checking your emails, that’s not a character defect on your part,’ Becca reminds us. ‘It’s not necessarily even tied to attention or rewards. It says nothing about your value as a person.’

‘Instead, it might speak to a broader issue that you face – that we all face – about how our working lives take up a huge amount of our time and energy.’

Set your own boundaries

Some people will be able to declare that they only respond to emails between 10am and 11am, while for others, these sort of email hacks just aren’t realistic.

They key, says Becca, is working out what boundaries you can set, defining them, and then sticking to them.

You need to find a way to fence off email so it isn’t leaking into every waking moment of your life.

‘For one person this might be checking emails once a day and setting an “out of office”,’ Becca tells us. ‘I see a lot of people recommending this, people with the luxury of working for themselves who already have a lot of opportunities coming their way.

‘For another person it might be checking once an hour and not replying to everything straight away.

‘Even if you feel like you have to be checking your emails all the time for your job – and some people might genuinely need to, let’s not forget that – there will be at least one change you can make.

‘Maybe it’s blocking off focused work time when you don’t check for an hour or two at a time. Maybe it’s setting reminders to check just a few times a day.

‘As boundaries are personal, I think so is email management.’

If you’re changing the way you handle emails, it’s worth giving people you work with a quick heads up.

For one thing, it means they won’t be baffled by your sudden shift in email phrasing, but it also helps to set an example of a healthier relationship with our inboxes.

‘What this might look like in practice is a chat with your boss about how emails are causing you stress so you’re always going to schedule two hours in the afternoon of uninterrupted work, that way you’ll get more done,’ notes Becca.

‘If you work for yourself, maybe you can set up an ‘out of office’ that gives people details about how long you’ll take to reply or, if you have an agent or someone else that works for you, you could give their details instead.’

Change the way you collaborate and communicate at work

The sad truth is that you can’t just declare you’re abandoning emails and expect everything to go smoothly. If you’re reducing your reliance on emails, your workplace will need a different, better way to communicate.

Cal says: ‘To solve overload, you have to replace the hyperactive hive mind workflow with alternative ways of collaborating – specific rules, systems, and processes for accomplishing specific work tasks that eliminate the need to send and receive many unscheduled messages to get things done.’

What does that look like? That’s really up to you. Maybe you’ll have actual in-person meetings, with clear individual action points in-between. Perhaps you’ll have ‘office hours’ where you’re open to chats and questions. Maybe you’ll be all about Slack, but with an emphasis on ‘do not disturb’ modes.

‘A good heuristic to keep in mind is that email is good for broadcasting information or asking questions that can be answered simply with one message (e.g., “when does your vacation start?”),’ Cal adds.

‘For every other type of interaction, ask yourself if there’s another way to implement the communication; a way that won’t require multiple messages that arrive at unscheduled times and require a response.’

Find yourself spending a significant chunk of time every day just deleting emails you haven’t even opened?

Save your future self the faff by setting aside some time to unsubscribe to all those emails that clog up your inbox and that do you no good.

‘This can feel time consuming, but it’s worth it in the long run,’ says Becca.

Change the way you use email

‘But I am not happy if I find myself in a long, drawn out, asynchronous discussion being implemented over email: these are what generate that hyperactive necessity of constant checking.’

Break the expectation of immediate replies

This is going to be hard at first – it’s a real adjustment.

But it’s time for you to stop dropping everything to reply to non-urgent emails in a matter of minutes. All you’re doing is making this seem normal, and setting up an expectation for yourself and other people to struggle to meet.

Get comfortable with letting an email sit unopened and unread for a bit. Stick to those boundaries you set and slowly adjust your behaviour so people know that you won’t be offering instant responses.

If that’s tricky, try scheduling your replies to leave a bit more of a gap. At least this way, you’ll stave off the other person’s quick response for a bit and stop the weird tennis match of speedy replies.

What works for one person might be hellish to you. If that’s the case, don’t do it!

Becca says: ‘Don’t fight the way your head works. If the idea of getting to inbox zero feels like it’ll genuinely be helpful, come up with a new system to get there. If you know that’ll just add even more pressure to your day, don’t bother.’

Rather than interrupting your day with constant email checks and responses, assign some time just for this task.

You might think you’re nailing the multitasking thing – you’re not.

‘Schedule in a reminder to check your inbox only a few times a day,’ Becca recommends. ‘Or, if you’re in a job that requires a lot of communication, schedule in time for focused work when you won’t check your inbox.’

Maybe you’ve made your inbox a little more manageable… but are you contributing to someone else’s overwhelm?

Check in on your email habits and ask whether you’re helping to create the very systems that are making you miserable.

Are you sending your colleagues constant late-night messages, that you know full well they’ll feel they need to respond to right away? Are you sending a lengthy email when you could just ring someone up and ask a question?

Check yourself and adapt your own email etiquette. Be the change you want to see in your inbox.