Why striving to be liked in the workplace is overrated

Striving to be liked in the workplace may seem like a worthwhile objective, but an Australian leadership expert warns it is overrated as it can stifle creativity while pushing gossip and bullying to fester underground.

During a 12-month expedition to Antarctica's Davis Station, author of new book Respect Trumps Harmony, Rachel Robertson, was thrust into a team she had not chosen herself and tasked with turning “a random assortment of diverse individuals into a high-performing team”. 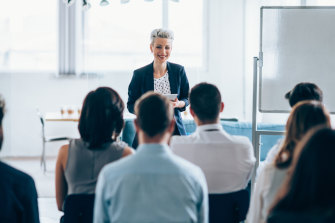 “Women are raised thinking that if you don’t have anything nice to say, don’t say anything at all,” explains Rachel Roberson.Credit:iStock

What she found was contrary to much modern belief about what works – and what doesn’t – within the workplace.

“When I tried to be liked and tried to get the team to be harmonious, I found that bad things still happened,” Ms Robertson says. “Bullying, moaning, turning a blind eye to safety – all of that kept happening; it just went underground.”

She adds that the desire to be liked also can harm innovation.

“For example, if someone comes up with an idea you may not like, you may not want to challenge it to keep the peace.”

Trying to pander to harmony left Ms Robertson unable to create a functioning team, so she says that instead, she “set about developing a culture that would allow everyone to speak up, speak out, raise issues, deal with them and move on.”

“I would spend up to an hour a day listening to those conversations, thinking ‘you’re just venting’,” she says. “I was so tired and exhausted from the conversations, and didn’t have the energy to help.”

Ms Robertson says that Australians in particular find it difficult to have direct conversations: “We operate in a culture of mateship, where we like to treat each other as mates, which is not always good for diverse workplaces.”

“When you try to be liked, you won’t challenge or rock the boat even if there are problems,” she says. This is particularly difficult for women, who experts say have been raised to be submissive and seek being liked.

Professor of Psychiatry at Alfred Health and Monash University, Jayashri Kulkarni, says women are taught that “making peace is their main role in life”.

“Trying to get kids to play nicely, trying to make everything work depends on being able to balance opinion and submerging your own, and that's not often how leadership work,” Professor Kulkarni explains.

“It's a very rare woman who stands firmly on a point and doesn't shift, and that’s about wanting to be liked.”

Ms Robertson agrees: “Women are raised thinking that if you don’t have anything nice to say, don’t say anything at all.”

“There are many problems with this, one of which is that it drives bad behaviour underground and into gossip territory, as no one wants to confront someone who has said or done the wrong thing directly,” she says.

To resolve conflict in and out of the workplace, Ms Robertson recommends using only facts and not speaking in absolutes (so avoiding words like always, no one, anyone, never).

“When we speak in absolute terms such as ‘you never do this, you always do this’ the whole debate gets messy and people get emotional and upset, which detracts from the problem we’re trying to resolve,” she says.

She does, however, acknowledge that for women, it is tougher to let go of the need to be liked than for men, and for others to accept it.

Successful women in particular have been shown to be disliked and seen as hostile, selfish and cold.

“While everyone wants to be liked, it's easier for men to be more forceful and still get respect. Women, especially those from older generations, see being quiet and compliant as the best way to behave.”

But as the workplace – and society in general – becomes increasingly diverse, it’s more important than ever to find a way to communicate respectfully without necessarily striving to be liked.

“We no longer live and work in homogeneous groups, which means we socialise with people who have very different values and opinions to us,” Ms Robertson says.

“In my team, for example, I had two gay men and men who voted against same-sex marriage, and we had to live together around the clock for a year in a difficult environment.

“So while I couldn't expect that either group would change their values, I could expect that they would treat each other respectfully, which doesn’t always translate into liking each other.”