Why these women swear by wild swimming

Why we joined the WILD bunch! These women swear by outdoor swimming – and say the natural exercise has transformed their self-worth

Sitting perched on a ledge of rocks, tearfully watching the sunrise above the vast expanse of sea before her, Katie Maggs felt lost and alone.

She had recently been signed off work following a stress-related breakdown. Having consistently put the needs of her family and demands of her career above her own physical health and mental wellbeing, things had simply become too much.

Over time, what started with twitching eyes, regular migraines and a pervasive feeling of being too busy to ever stand still, had developed into a neurological disorder that caused Katie’s limbs to jerk involuntarily. This made sleep difficult.

‘So, on top of everything else, I had dreadful insomnia,’ explains Katie, 38, deputy head at a college in Cornwall. ‘Yet, I still tried to keep going.

‘Like so many women, for years I’d focused on being a good mum and a conscientious employer, while always trying to be there for my wider family — and I juggled the niggling domestic pressures of everyday life too.’ 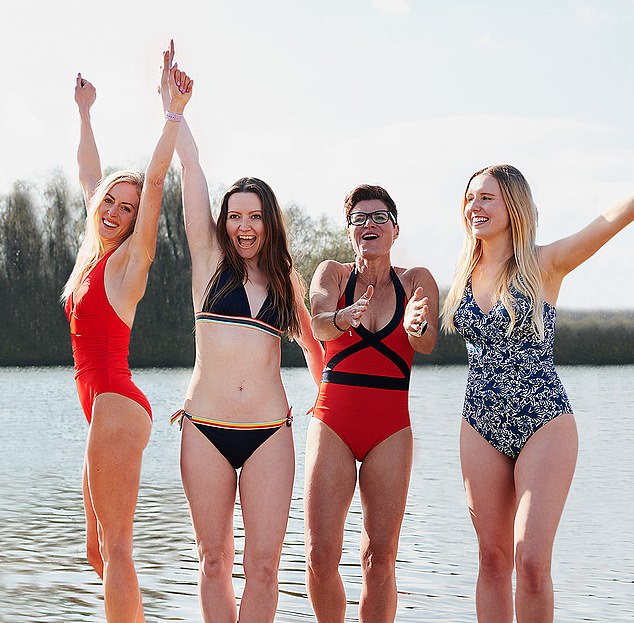 Then, one day three years ago, while at work, Katie hit a metaphorical brick wall. ‘I stopped being able to function,’ she says.

‘I’d been doing my job for ten years, and suddenly found replying to a simple email beyond me. I broke down at my desk. My doctor signed me off for four months having referred me to a neurologist.’

Various blood tests and scans failed to find a physical cause for Katie’s symptoms. Her neurologist concluded that the jerking, the migraines and the brain fog were due to sheer exhaustion. She had to learn to relax.

The only comfort Katie found during this period of acute insomnia was to walk along the sea front near her home in Penzance at dawn, taking photographs of the sunrise.

But one morning, Katie felt the weight of recurring sleeplessness overwhelm her. She sat weeping on the rocks, oblivious to the group of men and women, dressed in swimwear, making their way over to her.

‘They were local sea swimmers who take to the water at dawn each morning,’ Katie explains. ‘The men and women of all ages — from teens up to 80s — simply sat on the rocks with me as the sun came up and shared their own stories of difficult times.’

Swimming in the sea had been a healing experience for many. They urged Katie to step into the water, convinced it could be a balm for her.

She admits: ‘I couldn’t cope with life on solid ground, let alone find the courage to swim out to sea. But I headed down there each morning just to watch them step into the water.

‘Over several weeks they coaxed me in. First I just stood ankle deep, while they swam; gradually I went further in until one morning I let my body be lifted by the waves.

‘Growing up by the sea meant I would often go in, but this felt different. I was swimming in semi-darkness, with nothing but my swimsuit between the icy cold water and me. It felt a brave thing to do – and over time, I began to feel less fragile because of it.’

For Katie her daily dip became as important a part of her journey back to health as the anti-depressants from her doctor.

‘The headaches passed, the jerking eased and I began to sleep again,’ she says. ‘On bad days I’d remind myself that while most people had still been tucked up in their beds that morning, I’d thrown myself into the freezing cold sea. That surely meant I must be strong, and that I could get myself better after all.’

Indeed it did. Today Katie is no longer taking the pills. She’s back at work, enjoying her family life —she lives with her partner, 43-year-old college lecturer Ian Prowse, and her son Caden, 16 — and sea swimming is still a non-negotiable start to every day.

An unexpected bonus of her wild morning dips, says Katie, is the boost it’s given her body image, something she struggled with as a teenager.

‘When you strip off each morning, surrounded by people of all ages, shapes and sizes, you start to respect the human form for what it can achieve as opposed to how you think it ought to look.’

Wild swimming really does seem to be having a moment. Hundreds of new clubs are being formed across the country, according to the Outdoor Swimming Society, which has seen membership increase to 70,000 over the past two years.

Clothing brand Boden picked up on this and got seven wild swimmers together to pose in a new swimwear range as part of a ‘real women’ campaign.

Katie was one of them, hopeful that in taking part she might encourage more of us into the water. ‘And also, to embrace our bodies as they are rather than how they might be,’ she adds. Joanna Shimwell, a 32-year-old farmer from Derbyshire’s Peak District, was another. ‘I have a very slim frame – it’s down to genetics – and have been horribly skinny-shamed all my life.’

But Joanna says that exercise – and swimming in lakes and rivers, which she started doing weekly 18 months ago — helped change her relationship with her body. She says: ‘Wild swimming lifts my spirits and makes me feel strong and brave. I love my body for the way it feels in the water.’

Gilly McArthur, 47, a freelance illustrator from Cumbria, was another ‘real-woman’ model chosen by Boden, for the shoot at Horseshoe Lake in Berkshire’s Sandhurst.

She swims three times a week in one of the many rivers and tarns near her home. ‘She says: ‘Swimming helps me feel good, physically and mentally. My body isn’t very feminine – I have an athletic build. But I look at it with pride rather than a critical eye as it lets me do this thing that I find empowering. It connects me with nature – what matters is how that makes you feel, not what you look like.’

Fay, a paediatric nurse with the children’s charity, Barnados, says: ‘For me, the urge to get in the water is stronger than any insecurities I might have about how I look. And I love the sense of camaraderie being at the lakeside with other women in various states of undress, and feeling nothing but pride at what we’re about to do.’