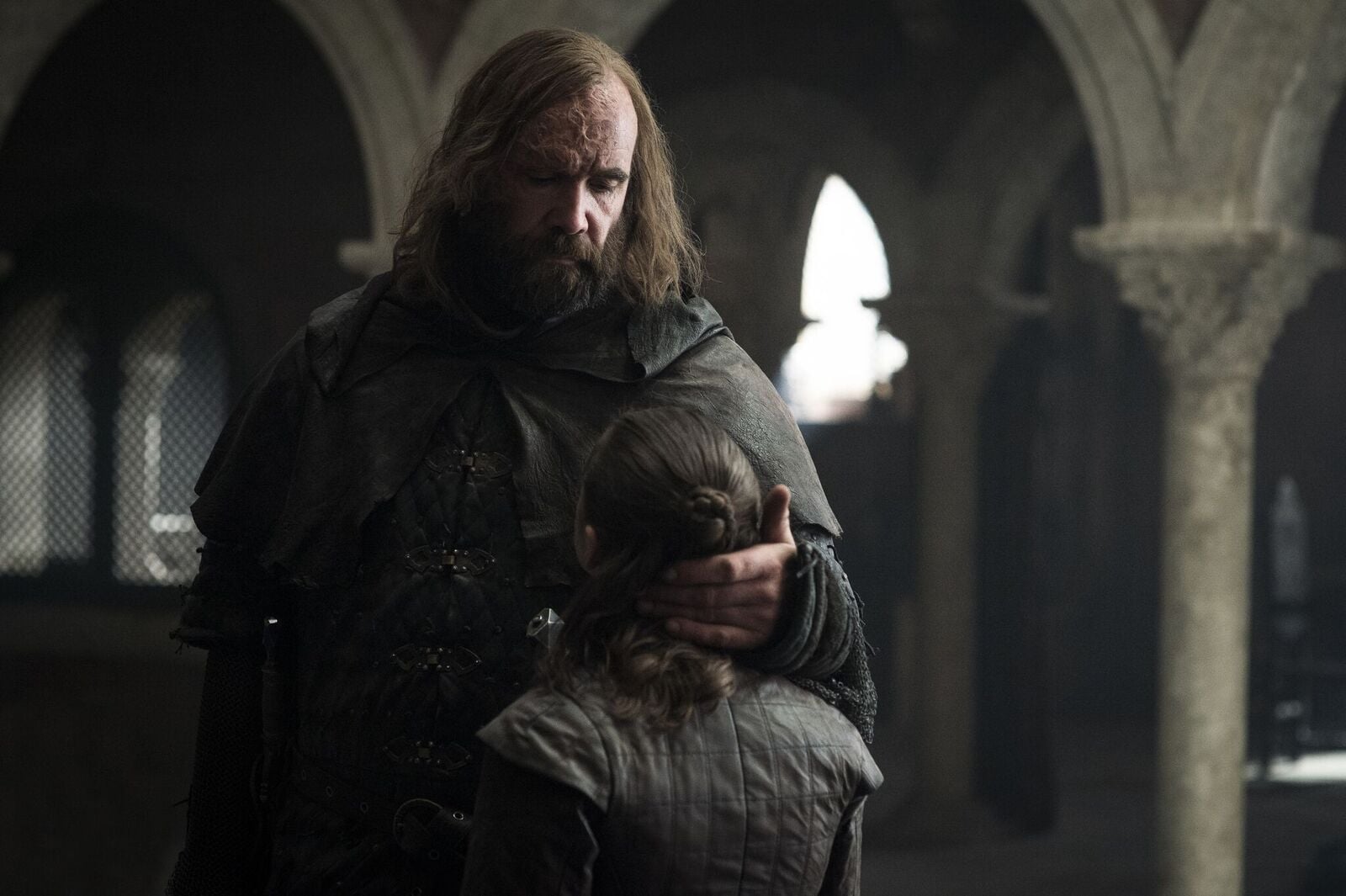 As Game of Thrones moves toward its epic conclusion, very few players remain. Yet, in the episode titled “The Bells,” one of the few characters to rise from the ashes of Daenerys attack on King’s Landing is the usually unflappable Arya Stark. Though we end the episode with her escaping the city on horseback, she very well could have died with all the others if it weren’t for the stern but meaningful warning given by her friend and traveling companion, Sandor “The Hound” Clegane.

As they enter the Red Keep, Daenerys and her dragon begin their destruction of the sovereign stronghold, and the Hound recognizes that if they move forward together, neither of them will leave the wreckage alive. “If you come with me, you’ll die,” he says and then warns her that she shouldn’t want to be like him — a person whose life is consumed by death. It’s a heavy notion to contemplate in their mere seconds that they have before the wall crumbles down around them. Cersei Lannister has been on Arya’s kill list since the first season by accusing Eddard Stark of treason. However, we would imagine now that Arya knows Jon Snow has the potential to be king, she has at least one good reason to let the past go and live for today — if not for herself, than certainly for the sake of making sure her brother regains his birthright.

The executive producers on Game of Thrones agree, with David Benioff saying on HBO’s “Inside the Episode”:

“It’s a small scene, but it’s also for us one of the most important scenes in the whole episode because it’s the culmination of their story together. The road to vengeance always ends in one place, which is what the Hound is saying to her here. ‘I made my choice a long time ago, and this could only end in one possible way for me, but for you — you have so many other options.’ The Hound has genuinely come to have affection for Arya. I think he loves her as much as he’s capable of loving someone, and he knows that if she comes with him at this point, she’s not going to make it out of there.”

And for the first time, Arya returns the affection the Hound shows her by addressing him by his birth name “Sandor” and thanking him for protecting her until the very end. This seems like a fitting finale to their relationship, which began in the fourth season when he took her hostage so that he could sell her back to her aunt Lysa Arryn in the wake of the War of the Five Kings. She ultimately leaves him for dead after he falls in battle against Brienne of Tarth. However, a mutual respect takes seed during their time together as they are both people who never back down from a fight and rally against injustice. By saving her from certain death in his last moments, he is cleaning the slate and officially settling the score between them, despite her already having forgiven him by removing him from her list.

But what Arya will do with this newfound second chance, remains to be seen. After all, some could argue her “brown eyes, blue eyes, green eyes” prophecy hasn’t yet been completely fulfilled since Daenerys is one of the few people in the realm with green eyes. And with the carnage Arya’s seen at the hand of the Dragon Queen, the young Stark just might have a new name for her list should she choose to continue to walk the path of death and destruction.