Home » Lifestyle » ‘Why wasn’t I born a man?’: children aim to right an artistic wrong

After Judith Perrey died a few years ago, her daughter Jenny McAllister found the daily journals the Melbourne painter had kept all her life, written longhand into exercise books.

They were mostly pragmatic, matter-of-fact records of her family and artistic life. But one phrase jumped out at Jenny. “Why wasn’t I born a man?” 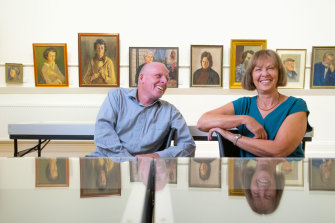 Reflecting on the past: children of painter Judith Perrey, Jenny McAllister and her brother Peter.Credit:Simon Schluter

“And that’s the only indication you get,” says McAllister, of the frustration her mother felt at the turning point in her life. As a young, supremely talented – but working class and female – artist in the 1940s, she lost a golden opportunity to a man, based on the judgment of men.

More than half a century later, Perrey’s children Jenny and Peter are mounting a retrospective valedictory exhibition of her work at the Victorian Artists’ Society Galleries in East Melbourne, to fulfil one of her last requests and in the hope to find her work a home. 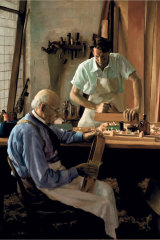 But they also hope it will be a vindication. A visual rebuff to those men of the establishment who didn’t see what was in front of them.

“There’s a guilt trip in me, too, because we grew up with it, and didn’t get the significance or importance of it until mum was gone,” McAllister says. “I don’t think she ever felt she wasn’t good enough, but I think she felt she would not get the recognition that males would get automatically.”

As a girl, McAllister was unaware of the significance of a huge oil painting that hung on her bedroom wall: Toy Makers, an old man and his apprentice at work.

Perrey painted it in 1947 as a student at the National Gallery of Victoria Art School. Renowned painter – then head of the school – Sir William Dargie later called her the “most naturally gifted” student under his directorship, the equal of some of its best alumni. His predecessor in the job, another Archibald winner Charles Wheeler, agreed. 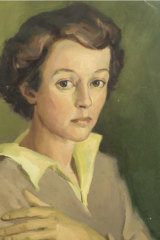 Then came the 1947 Travelling Scholarship, a competition whose winner would be sponsored over two years in Europe taking their craft to the next level. The Argus newspaper judged her entry “one of the best painted by a Gallery student for many years”.

But a “dank shadow” was cast onto Judith’s life, says art historian Dr Juliette Peers in the exhibition catalogue.

She came second. The winner was Douglas Green, a 28 year-old ex-soldier, with a bold depiction of train passengers in a modern style that “may shock conservatively minded art enthusiasts”, the Hobart Mercury wrote.

Peers says it was perceived as a skirmish in the wars over the arrival of “modern art” – Perrey was a painter in the more traditional style. However Peers says it may have simply been gender that determined the outcome.

The three men on the judging panel decided Green showed the “greatest promise of becoming … a painter likely to enrich his country’s art”. The one woman on the panel, Alice Bale, strongly disagreed, forcing the result to a ballot.

“Art schools [at the time] were increasingly dominated by mature ex-service students,” Peers says. “Male artists captured attention. Many of Judith’s female contemporaries, when interviewed later, believed that being a woman weighed against her.”

The following year, Perrey wrote in her diary that she had been told the judges thought her work better, but a male student was more likely to be a future success. She entered the Archibald, was a finalist, but didn’t win.

Two years later, the woman who had repeatedly told her diaries she would never marry, got married, and a year after that quit her job as a commercial artist at Murdoch’s Herald and chose a suburban, domestic life. She continued to paint, mounting the occasional show with arts groups, doing portraits or Christmas cards. She painted her children, and these works show “her gifts never faded”, says Peers.

One colleague, who had made a fortune with teddy bear art and collectables in the 1980s, slammed Perrey for “irresponsibly throwing away her remarkable gifts”, Peers says. Judith found this “hilarious rather than wounding”. 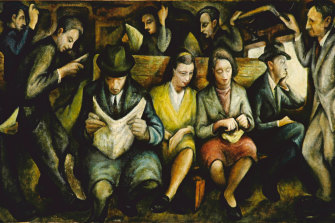 The man who won the scholaship, Green is, like Perrey, almost lost to posterity. His winning work sits with Perrey’s runner-up in Warrnambool Art Gallery. McAllister says this was a deliberate, mischievous move by Perrey, who donated her work to the gallery. A wordless gesture from the past; a note in a diary now closed.