Why you should vote 1 against political satire

In this column, we deliver hot (and cold) takes on pop culture, judging whether a subject is overrated or underrated. This week, political satire.

Okay, LISTEN. Don’t be mad. I don’t want to be mean. But I do believe I’m about to be terribly mean.

I’d rather dress up as a mop so they can use my tongue to clean an airport bathroom than see one more political satire sketch.

Before I get into the reason for that hatred, I need to tell you about my father. 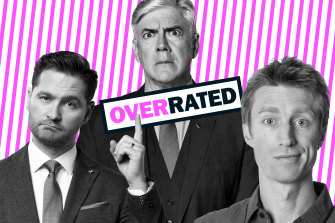 Political satire is catharsis in the form of a flaccid, self-righteous message.

My dad, a big, fat car-obsessed heart attack enthusiast, was generously taken aback when I came out to him as bisexual (I had assumed he already knew because I had 10 haircuts at once on my one head).

Now, he was old, as old guys sometimes are. But the rest of the conversation wasn’t as cute as that little snippet. It was a bit heartbreaking, he was disgusted, I cried, and we didn’t talk for a few weeks.

Two years and quite a few embarrassing questions from Allan Lardner later, and he was in the front row of the Big Gay Debate I was performing at, giggling as a drag queen loudly teased him from the comfort of his ample lap. He’d made gay friends, voted yes for same-sex marriage in 2017, and “quite enjoyed that Rocketman flick”. He is currently deceased but peaced out as a thoroughly changed and accepting man.

The reason this story is relevant is that it’s one of the few times, in my entire life, I have ever seen someone change their minds about something big. And it took years! Plus, if he didn’t already know and love me, maybe he’d never be challenged or curious enough to consider another point of view.

I really think that personal connection or experience is often the only way to have this kind of meaningful shift and not a silly little four-minute sketch that self-righteously lampoons your personal beliefs.

I told some of my friends I was writing this article to get a few opinions, and to check if I was being too harsh. When reached out to for a quote, my friend Stefan had this to say: “It is nice to be here in the article”.

“But it’s the power we have to stick it to The Man! We gotta tear them down and embarrass them! Hold them responsible!”

Nah, man. They don’t care. They kinda like it. Because they are getting attention, and have the opportunity to engage with criticism and humanise themselves. “Hahaha, ya got me! Ain’t I a stinker?”

The other glaring issue I have with satire is simpler. It’s just … never funny. It’s all point-making. I truly believe there is more inherent worth in the video of the spinning helicopter granny. It makes me smile! She’s spinning so fast! It’s not making a point at all except that once, a granny was exceptionally spun.

The majority of modern satire ends up being somebody in a suit with a name tag on, saying out loud “I am evil and I like being evil.” That’s … not a joke, I don’t think. It’s just subtext said out loud. It’s something to agree with, so you don’t lose your mind.

It’s catharsis in the form of a flaccid, self-righteous message. It’s Jack Torrance dutifully turning your boiler release valve of frustration before he goes insane from cabin fever and forgets to not murder his family (I just read The Shining). If all we get from satire is a pillow to scream into until we feel better, and I truly believe that IS all it’s doing, when do we get angry enough to explode and burn down the Overlook Hotel? (Read a book!) Catharsis is fine and all, but man, I’d love it if we could collectively leave it in the yard for a minute and get mad enough to encourage meaningful change (Shelley Duvall was such an interesting choice in the movie version).

In 50 years when we are holding up singed sock puppets behind a hollow TV near a barrel-fire in the crumbled skeleton of a fallen society, may we all get a hearty chuckle out of one sock puppet labelled “The Government” looking to the other sock and saying “I’m ever so dumb”.

To the satirist who insists that they can meaningfully change minds, in my mind, the thought process there boils down to: “Damn, this is making me agree with myself so hard, I bet it’ll make someone who thinks the exact opposite agree too!” No it won’t! Shut up! Let’s get mad and burn something down!

(For legal reasons, I do need to insist that this last bit is satire.)