Woman discovers her friend watched her have sex with her partner

A woman has revealed her horror at discovering a friend had set up a webcam to secretly watch her and her boyfriend having sex.

The anonymous British woman posted to Reddit to explain how the friend had invited her and her boyfriend to stay, then set-up a webcam in their room so he could watch them from his laptop in another room.

She explained: ‘B had a computer system of two monitors and a webcam in the room we were using.

‘One screen was on and one was off. After N and I had sex, he asked if I knew why the webcam was lit up. He approached it and the light went off. 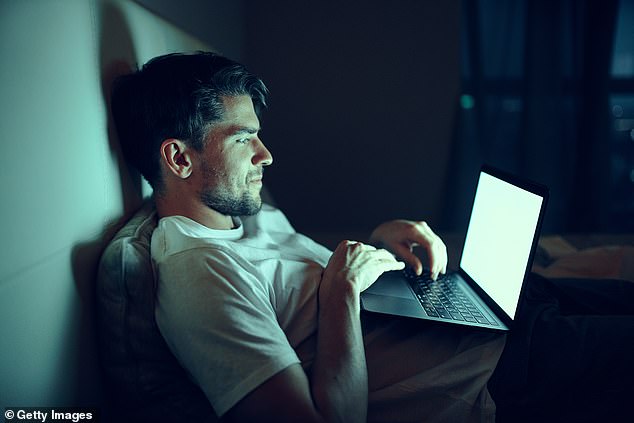 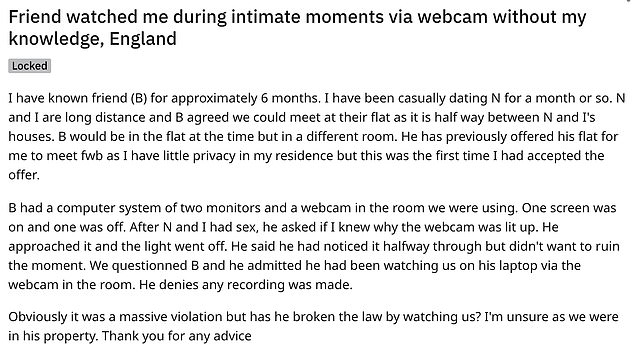 The anonymous British woman posted to Reddit (pictured) asking for advice after discovering the private, intimate moment she had shared with her partner had actually been viewed by her friend

‘He said he had noticed it halfway through but didn’t want to ruin the moment. We questioned B and he admitted he had been watching us on his laptop via the webcam in the room. He denies any recording was made.

‘Obviously it was a massive violation but has he broken the law by watching us? I’m unsure as we were in his property. Thank you for any advice.’

Fellow Reddit users were quick to urge the woman to take legal action, explaining it was illegal.

One person mentioned the UK government’s ‘Sexual Offences Act 2003’, saying: ‘This is Voyeurism and is covered under section 67 yes this is absolutely illegal!’

The section criminalises ‘offenders who record an image beneath the clothing of another person’s clothing (without that person’s consent or a reasonable belief in their consent).’

Reaction: Social media users were outraged at her friend’s actions and strongly advised the woman to contact the police

Another person agreed, saying: ‘It seems like your “friend” set this situation up so they could use that webcam to watch you have sex.

‘The webcam wouldn’t have just been on without it being turned on by someone. You wouldn’t turn on your webcam before a friend comes over to have sex with their partner in that room.’

A third person wrote: ‘You need to report this to the police, immediately. Police will likely seize the laptop and any other electronic communications equipment (phones, tablets, etc.) in that house. Very few people know how to mask illicit recordings beyond, ‘I better delete this from my laptop’.’

Another said: ‘He clearly planned this and almost definitely recorded the event I would strongly advise you report him to the police so they can conduct a search of his hard drive to find out if he made a copy.’

Others were convinced the friend had filmed the sexual encounter, despite his denial.

One wrote: ‘He clearly planned this and almost definitely recorded the event I would strongly advise you report him to the police so they can conduct a search of his harddrive to find out if he made a copy.’