Woman widowed at 32 reveals how she overcame her agonising grief

A woman who became a widow at 33 when her childhood sweetheart passed away from cancer has revealed how she battled her overwhelming grief which saw her struggle to get out of bed for six months and resent her friends for having children.

Katie, 33, of London, lost Adam on New Year’s Day in 2019 after a brave battle against the cruel disease, which rendered him paralysed from the waist down.

She told how she found it difficult to cope with the ‘firsts’ after his death – facing occasions like his birthday, Christmas and anniversaries alone – but undergoing cognitive behavioural therapy has helped her start to live her life again.

Katie is sharing her story in light of a recent study commissioned by PG Tips which saw four in five (78.2 per cent) millennials admit to experiencing feelings of loneliness in the last year – though 52 per cent claimed they wouldn’t admit to it due to the ‘stigma’ attached. 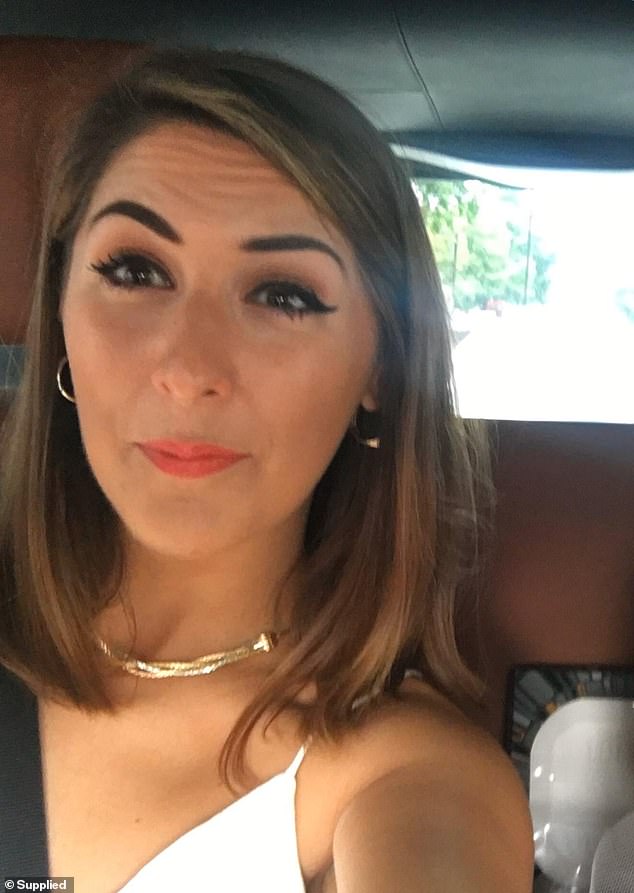 Katie, 33, of London, pictured, lost her husband Adam on New Year’s Day in 2019 after a brave battle against the cruel disease, which rendered him paralysed from the waist down

Speaking to FEMAIL, Katie – an associate director at a PR Agency – said a big lesson she learned as a result of losing Adam is that no matter what has happened and how low you feel, you still have a life to live – and there is no shame in seeking help.

Katie and Adam, a talent booker for a corporate entertainment agency, met aged 14 at school in Wolverhampton.

They ‘instantly clicked’ and got engaged in summer 2016 when Adam proposed at the top of Tower Bridge in London.

But their lives were turned upside down when Adam was diagnosed with a very rare spinal tumour in March 2016.

He underwent an 11-hour emergency surgery to remove the ‘low-grade’ tumour at Charing Cross Hospital, and the relieved couple were told 75 per cent of it had been removed and it was unlikely to return. 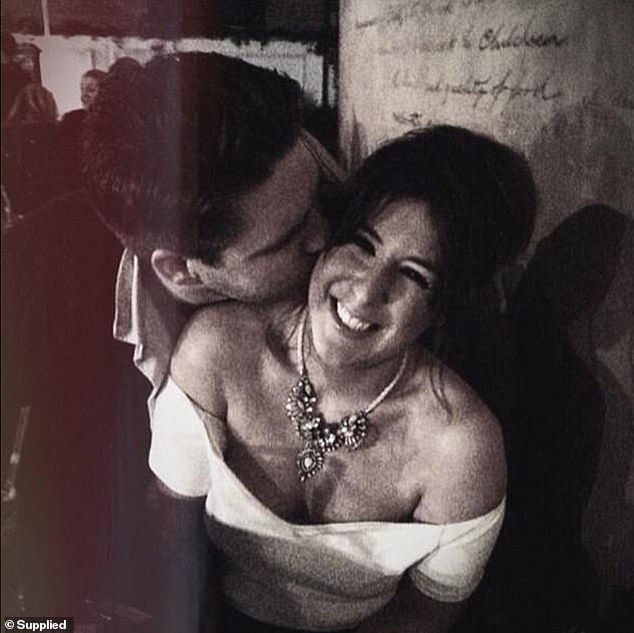 Katie, pictured with Adam, told how she found it difficult to cope with the ‘firsts’ after his death – facing occasions like his birthday, Christmas and anniversaries alone

‘We headed home and breathed a massive sigh of relief thinking we’d dodged a bullet,’ Katie recalled. ‘But six months later the tumour returned with a vengeance.

‘Adam bravely went through two more spinal surgeries, with the last falling on my 30th birthday. It was this surgery that went horribly wrong, paralysing him from the waist down.’

While Adam was coming to terms with his new life in a wheelchair, doctors told him the tumour was now high-grade and aggressive. They attacked it with radiotherapy and chemotherapy every day for three-and-a-half months.

‘It was brutal but he battled on,’ Katie said. ‘We then heard that treatment hadn’t worked, and the tumour continued to grow.

‘Refusing to give up, we spent 18 months trying alternative treatments and to the surprise of our doctors, the tumour remained stable and under control.’

The couple held a ‘shotgun wedding’ in London in August 2017, which Katie said was the ‘happiest day of their lives’. 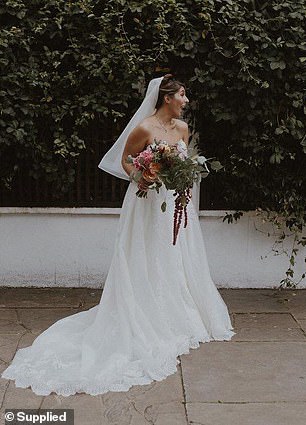 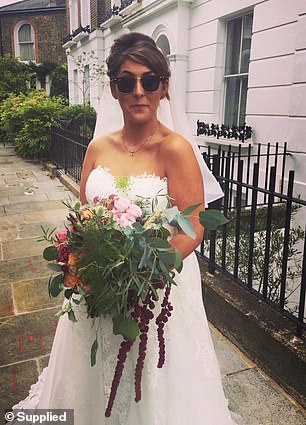 The couple held a ‘shotgun wedding’ in London in August 2017, which Katie said was the ‘happiest day of their lives’

‘For the next year we enjoyed our married life alongside treatments, scans, MRI results, Macmillan nurses, consultants, rehab and specialists,’ she said.

‘Just as we started to believe we’d dodged our second bullet, on July 12 in 2018 we went in for a routine check and doctors gave us the devastating news that the primary tumour in his spine had spread throughout his spinal cord and, worst of all, gone into his brain.

‘The cancer had spread in such a way that treatment was futile and at best Adam had two months to live.

‘We decided to do things our own way and live his last few months to the full. We even made it to Notting Hill Carnival, with the help of our incredible friends.

‘Adam was adamant he didn’t want to spend whatever time he had left in a hospital or hospice, but instead in our home with me, his family and his friends by his side. 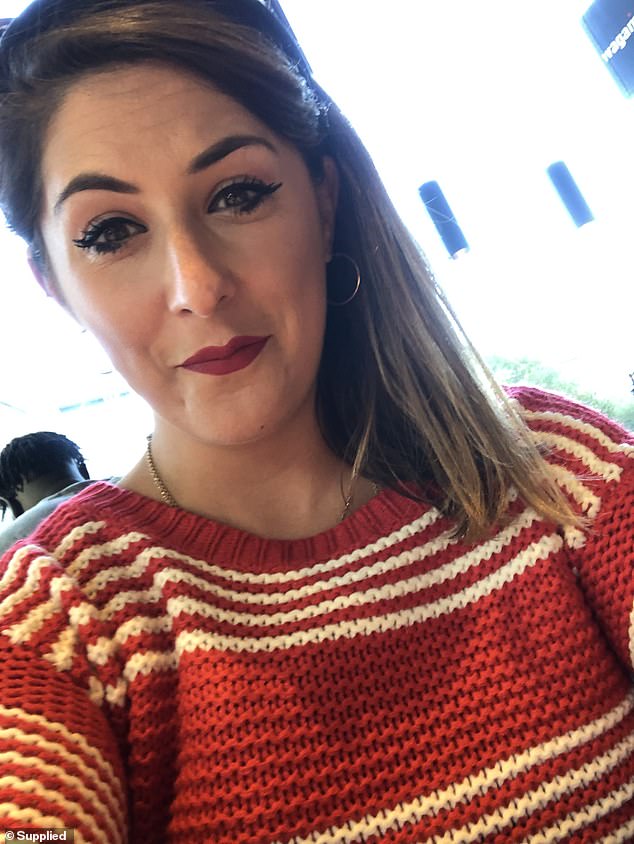 Katie and Adam, a talent booker for a corporate entertainment agency, met aged 14 at school in Wolverhampton

‘Miraculously Adam lived for five months, and with his usual dramatic flair, he decided that New Year’s Day was the appropriate time to say goodbye.’

Katie admitted Adam’s death still came as a ‘shock’ and she spiralled into a ‘very dark and lonely place’.

‘On the surface I was loved and supported, but inside I was completely alone,’ she said. 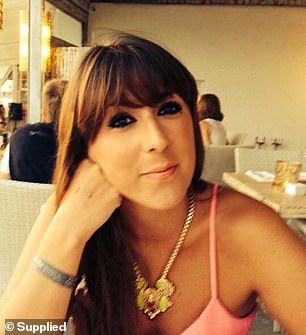 ‘My friends and family outdid themselves with the love and care they gave me after I lost Adam. The problem was that, no matter how many people I had around me and how loved I felt, he wasn’t here. What I’d just been through completely isolated me from everyone else.

‘I was the odd one out and I didn’t fit anywhere. People were scared of me because they didn’t know what to say… I was their worst fear come true.

‘Being widowed at any age is horrific, but at 33 when all of your friends are getting married, buying their first house and having their first child, it makes you feel like you’re in a different world, completely alone.

‘I was also incredibly angry that the life unfolding in front of me for everyone else is a life I’m never going to have.

‘I wanted to be happy for my best friend who’d just found out she was pregnant, but inside I was devastated – that was meant to be us, and now it never will be. 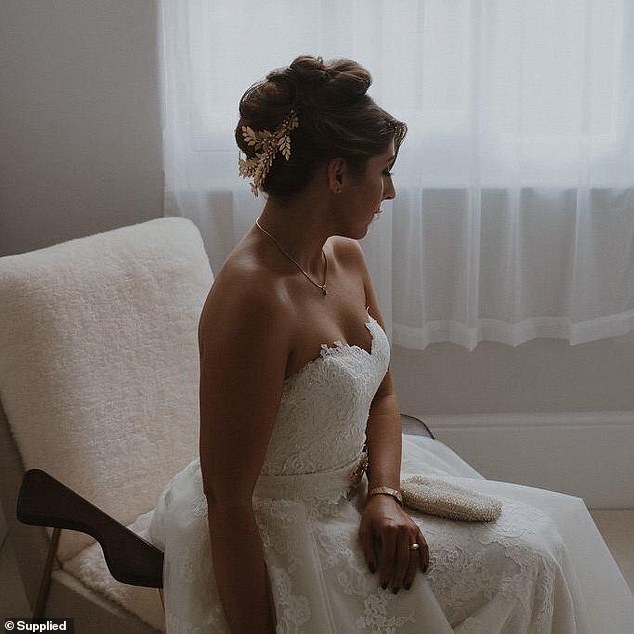 Katie said: ‘Being widowed at any age is horrific, but at 33 when all of your friends are getting married, buying their first house and having their first child, it makes you feel like you’re in a different world, completely alone’

‘My anger made me isolate myself from the people that loved me the most and I built barricades up around myself so that I didn’t have to deal with it. I isolated myself at home where all of those painful emotions couldn’t touch me.’

Six months after Adam’s death, Katie managed to access CBT through the NHS – and despite feeling skeptical about how helpful it would be, she said it was a ‘game-changer’.

‘After six months of barely functioning and rarely leaving the house, or even getting out of bed, I was willing to try anything,’ she said.

‘It was a game changer and helped me take the first step to rebuilding my life.

‘One of the many things my incredible therapist helped me do was to build coping strategies for the “firsts”, and as I started to implement what I was learning in therapy into my real life, things started to get easier.

‘I learnt that hiding away and avoiding the triggers was never going to be the solution. Facing up to the incredible pain of looking at pictures of him, not turning off the radio when “our song” came on, was what I had to do start to heal.’ 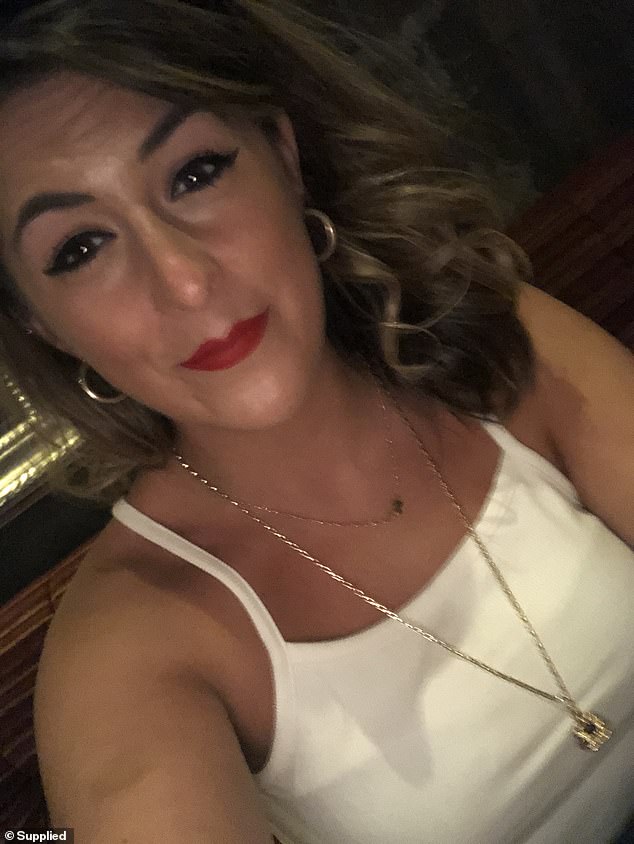 Six months after Adam’s death, Katie managed to access CBT through the NHS – and despite feeling skeptical about how helpful it would be, she said it was a ‘game-changer’

On Adam’s birthday, Katie threw a party for all of their friends and plastered the walls with pictures of him.

‘Left to my own devices I would have stayed in bed, closed the curtains and hid away from the world. It was incredibly painful, but it was better than avoiding those feelings altogether.

‘I plan to do the same thing every year for him and I know that each year will get easier.

‘Learning that it’s OK to cry, to break down when you’re sad, is one of the biggest things that I’ve learnt. If you deny yourself those emotions, they can manifest themselves in really unhealthy ways.’

Katie said CBT helped her to remember who she was before she lost Adam.

She added: ‘My anxiety was through the roof, I no longer knew what to say or how to act, so I just stayed silent for a really long time. 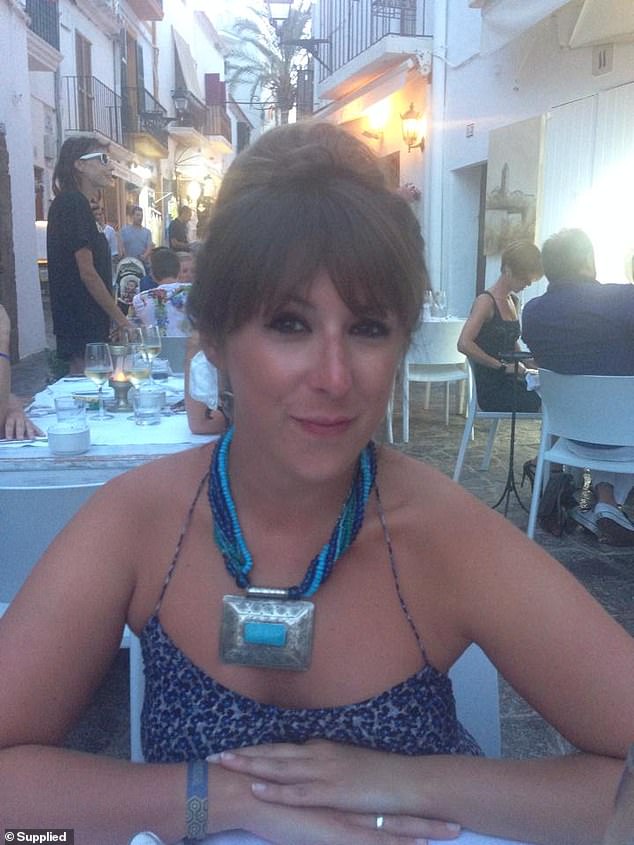 ‘Holding a simple conversation with friends of 20 years made me feel nervous. But I began to throw myself in to social situations that were completely alien to me, with people who didn’t know me as a widow.

‘They just wanted to hear what I thought and what I felt, and after a while that started to feel really empowering.

‘In a room full of strangers, I wasn’t that poor girl who lost her husband, I was just me with interesting things to say.

‘I have to work every day at not hiding away, pushing myself into the unknown and being confident to stand up and let my voice be heard; it’s terrifying but that’s what is helping me come back to life.’

The PG Tips report comes as part of an extended series of activities the brand is supporting in 2020 via partnerships with Samaritans, Time to Change and The Big Lunch.

Fiachra Moloney, Director of Tea at Unilever UK said: ‘Two thirds of the total UK population has experienced loneliness in the last year. We want to encourage everyone to feel open in talking about loneliness. Simply reaching out to a neighbour, chatting to a colleague or speaking to a family member can make a difference.’