Pimples, supermarkets, a naked bloke with a feather duster – that’s a list. A weird list, sure, but a list, presuming lists are sets of names, words or numbers. The same three items also seized my thoughts this week.

As a rule, shopping lists run longer than three things, be they scribbled on jotters or tapped in phones. Shrewder shoppers will curate groceries according to supermarket sections, where yoghurt nestles with cheese squares, but that level of detail hardly disqualifies a list from being a list.

Yet what about a list’s length? Imagine you visit your local mart with PEACHES on a scrap of paper – is that a list? The question came via a couple immersed in debate, where he claimed any number could constitute a list, while she insisted on two-plus. My risky job was mediator. 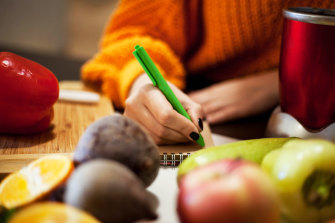 Some 60 per cent demanded any self-respecting list to carry two or more items, compared to a single itemCredit:iStock

Hence I consulted the crowd, asking netizens to decide the tiff. Question: How many items make a list a list? (A) One (B) Two (C) More than two. Three-hundred votes later, I’m here to report the majority lies in the pluralist camp. Some 60 per cent demanded any self-respecting list to carry two or more items, compared to a single item (more a minima-list), or none (a nihilist).

Leading us onto pimples, obeying my original list. Was there a collective noun for the pustules, the kind of archipelago to emerge on the eve of proms, first dates and school photos. Or were those my teens alone?

Again I put the conundrum to the web, inspiring a stream of brainwaves. Outcrop was an early leader, until things turned punny with zit city, Spotify, a pimplex, a puster, a teenage squeeze. Things got narky too: a cabinet, a pizza, a coalescence. Not to say elegant: a blush, a shoal, a palimpsest.

I loved this last idea, the term invoking the Greek blend of palin (again) plus psestos (rubbed smooth), referring to recycled manuscripts where a scribe has effaced some earlier writing so as to scrawl his own, just as blemishes rise and fall on our own human parchment. PALIMPSEST also carries the bonus anagram of PIMPLES SAT, which they do, day and night, to quote Karl Popper.

Speaking of bonus anagrams, before we meet that bare-arsed feather-waver, have you noted the sinister quirk within coronavirus? I don’t wish to downplay a major health challenge, but the coincidence goes beyond eerie. The fluke in fact was enshrined in a headline, appearing on the PETA (People for Ethical Treatment of Animals) website: Coronavirus Outbreak Is Linked To Eating Animal Flesh.

Add (11) to the headline’s tail and it’s an inadvertent cryptic clue. As soon as the disease’s letters break out, jostling into a new order, you spell carnivorous, as defined by the header’s closing phrase. Like I say, beyond eerie. But let’s switch focus to the duster dude: Is there a word for doing housework in the nude?

Was the practice known as buffing? Noovering? Or if the male is implicated: man-noovering?

Bob Macdonald posed the query: “We’ve been trying to recollect the Australian colloquialism for naked housework. There was a lot of interest in it back in the '80s.” I didn’t need to know that last detail, Bob, but the nudist’s gauntlet was thrown. I lobbed the mystery online and the smirks soon blossomed. Was the practice known as buffing? Noovering? Or if the male is implicated: man-noovering?

Satirist Mark Humphries suggested the custom was doing the bare necessities. While others offered moonshining, starch-naked, making a clean breast of things, unprofessional or putting the undress in laundress. Susan Wyndham, this column’s former editor, saved my hide with jaybirding, a relic from the swinger playbook of the '60s. A hazardous practice, no doubt, not to mention the dangers of unsightly streaking.