Workers will receive an increase in their income support from $500 to $600 a week while business owners will be offered a cash-flow boost of up to $10,000 in a new economic plan to help them through extended lockdowns.

The support will flow to thousands of companies forced to close in the lockdowns across the Greater Sydney region under a package funded equally by the federal and NSW governments, testing a new model for shutdowns in other states and territories. 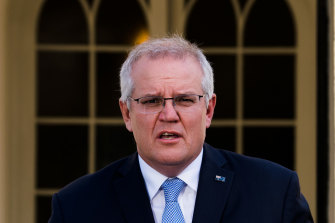 Prime Minister Scott Morrison and NSW Premier Gladys Berejiklian announced the package on Tuesday afternoon after days of negotiation over the scale of assistance and the best way to share costs.

People who seek the income support, known as the COVID-19 Disaster Payment, will be able to apply this Friday and will not have to keep applying for the duration of the lockdown, a change from the current system that requires people to fill out a new online form each week.

“You won’t need to keep reapplying all the time,” Mr Morrison said.

Companies with annual turnover of up to $50 million will be able to receive the cash-flow boost as long as they can show a 30 per cent fall in turnover. But they must also show they are not laying off staff, meeting the core government objective of protecting jobs. Employers will be required to maintain their full-time, part-time and long-term casual staffing level as of Tuesday, July 13.

The cash-flow benefit will range from $1500 to $10,000. Sole traders and others without employees will receive a set payment of $1000 a week. For those receiving more than the base rate, the payment will be set at 40 per cent of a company’s payroll bill, up to the maximum of $10,000.

A separate increase in the COVID-19 Disaster Payment will raise the rate of income support for workers who lose hours but expect to go back to their employers once the lockdown ends, giving them a way to cover living expenses without needing the JobSeeker unemployment benefit.

The higher disaster payments will apply from the fourth week of a lockdown in a “hotspot” defined by the federal government, an area that currently covers Greater Sydney.

The NSW government will cover the cost of extending the disaster payment to other areas so people who lose work across the state can receive the same payment.

The federal government estimates the new small business payment, funded equally with the NSW government, will support up to 500,000 entities employing more than 3 million people.

Mr Morrison said the cost of the package would be about $500 million a week, shared by the two levels of government, and added to $52.4 billion in federal support paid to households and employers in NSW during the pandemic so far.

Treasurer Josh Frydenberg, who strongly criticised the Victorian government for its lockdowns last year, said the situation in NSW was “chalk and cheese” because of the higher number of deaths in the southern state.

The federal and NSW governments also announced $17.4 million for mental health services to be delivered across the state through Lifeline, Headspace and the Kid’s Helpline.

More information will be posted on the Services Australia website as well as the Service NSW site over the coming days.

In a bid to head off any concerns that Sydneysiders were receiving benefits denied to those outside NSW, Mr Morrison said the new payment schemes would flow in other states and territories if needed.

“We have followed the same arrangements here in NSW that were put in place for Victoria,” he said, referring to the restrictions in Victoria several weeks ago. “Thankfully that lockdown was only in effect for two weeks, but clearly here in NSW the situation has taken a very different turn.”

Speaking from Kirribilli House in Sydney, where he is in lockdown, Mr Morrison said the payment rates were similar to those in the final stages of the federal government’s JobKeeper wage subsidy scheme, which he estimated had paid $13.4 billion to people in Victoria.

The new package gained immediate support from the Business Council of Australia, the Australian Chamber of Commerce and Industry and the Australian Industry Group, which said the spending would protect the national economy.

Labor treasury spokesman Jim Chalmers questioned how the federal government could check to make sure companies weren’t laying off staff.

“Today’s belated announcement by the PM and Treasurer proves they were too quick to cut JobKeeper and too slow to roll out the vaccines, and Australian workers and small businesses are paying the price for those failures,” he said.