Tourists making day trips or longer overnight visits to regional towns are more likely to visit their local museum and art gallery than stop at wineries or theme parks, a new report commissioned by the Australia Council has found. 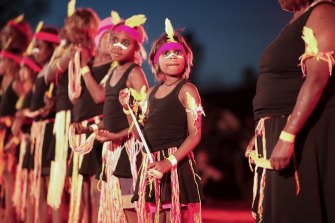 Indigenous performances celebrate the closure of the Uluru climb.Credit:Alex Ellinghausen

The findings suggest the arts are an under-recognised economic driver of regional Australia and could help fast-track bushfire recovery.

Sydney was the biggest destination of the 12.3 million Australians who took a day trip in 2018 (up from 7.7 million in 2009) to catch a performance or a cultural experience, followed by Melbourne, Brisbane, and Perth.

Ballarat, Canberra, and Bendigo are some of the biggest arts tourism hotspots, as is Queensland's Gold Coast and NSW's North Coast and  Hunter Valley, with many open studios, and the state's fire-ravaged South Coast.

Almost one-third of all overnight stopovers in ACT included an arts activity, with arts engagement biggest (37 per cent) in the Northern Territory's Lasseter region, home to Uluru.

Interest in experiencing First Nations arts and culture grew by 26 per cent from 2016 to 2018, with these intrepid travellers staying twice the number of days and spending more than double that of the average domestic tourist.

Overall, shopping (36 million visits) and sightseeing (35.5 million) were the most popular activity of day trippers followed by visits to beaches (26.8 million) and national parks (13.6 million). 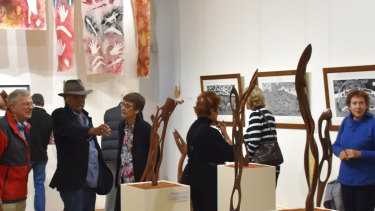 Twice as many visitors attended the local art gallery, concerts, festivals or cultural events (12.3 million) than an organised sporting event (5.5 million), visited a local monument (5.6 million) or a casino (400,000).

The stories and perspectives brought to life through the arts were one way tourists could make sense of the heartbeat of a place, said Dr Wendy Were, the council's executive director of strategic development and advocacy.

Attendance at museums or art galleries were also probably popular because they were both affordable and required less forward planning.

"Remember that old Palmolive ad that says,'You're soaking in it?'," Were asked. "We're soaking in [arts and culture] but we don't realise that we are half the time."

The report comes as the Australia Council mounts the case for more federal government funding of the arts sector, which has not yet recovered from a decision by former arts minister George Brandis to controversially strip out $105 million in funding.

Some, not all, money was returned, with the effect that in the next four-year funding round to be announced next month fewer than one in four small- to medium-sized arts applicants are likely to succeed.

Where natural environments had been devastated by bushfire, Dr Were said there was a clear role for arts to play in the rebuilding effort as a social unifier and economic kickstarter.

The council research was commissioned in 2019 before Australia's black summer, the findings closely mirroring a companion report on international tourism showing arts tourism outpacing in sheer numbers and tourism spending the general sector.

Broken Hill's strong history of art made popular by artist Pro Hart and the Brushmen of the Bush brought many tourists to the old mining town, according to the Tara Callaghan, manager of the Broken Hill Regional Art Gallery.

With national attention on the drought and the Darling River, travellers were also interested in artists such as Uncle Badger Bates, whose work depicted Indigenous Australian views on water management, animal and plant life, she said.

"Tourists are also drawn to the dramatic landscape and light; a lot of this is thanks to the strong history of cinematography and film-making in and around Broken Hill with Mad Max  [and] Wake in Fright, and it can’t be forgotten that the film industry is part of the arts."