Whether you’re watching The Office for the first or hundredth time, you know that Roy Anderson, played by actor David Denman, comes back in Season 3, ready to win Pam back—looking noticeably more fit. (Are we suddenly rooting for Pam and Roy??)

Recently, Denman joined Jenna Fischer (Pam Beesly) and Angela Kinsey (Angela Martin) on an episode of their podcast, Office Ladies, to discuss “The Negotiation” episode. And his in-shape return came up.

On the podcast, Denman said he was approached by one of the writers, Greg Daniels, who let him know that he wanted to make Roy into more of a rival of Jim Halpert. Denman said “Okay. Well, I probably should get into shape then,” to which Daniels responded, “Okay, if you want to.”

To get in shape, he decided to start training for triathlons. Runner’s World spoke with Denman about his experience.

This interview has been lightly edited for clarity.

Runner’s World: Out of all the ways to get in shape, how did you choose a triathlon?

David Denman: A good buddy of mine named Matt Sohn, who was a camera operator on The Office, had done the Malibu Triathlon, which takes place in the fall, a few times. He was going to do it again that year, (2006) so he suggested I do it. And I was like, are you out of your mind? But he said no, you can do it. I know a guy who can help you get set up with a bike. And he really encouraged me to do it.

DD: I’m not an athlete in any way, it’s not in my skillset to try to do any sort of like race like that. I’d never even done a 5K, so with an enormous amount of trepidation, I started training for a sprint triathlon [750-meter (0.46-mile) swim, a 20K (12.4-mile) bike, and a 5K (3.1-mile) run]. Once I got started, I really found I loved it. There was something about splitting up the disciplines and doing something different every day of training. Like anything, you start off really small and you just add to it and add to it.

RW: Did one element come easier than others?

DD: I was already a pretty good swimmer. When I was in high school, I played water polo so I was pretty comfortable with that. I’m not a runner. I’m a big guy, and my body is not built to go running. That’s still hardest discipline for me. And, I’d never ridden a bike for a race, so that took a while to get used to—getting the right gear and saddle. I went though so many seats trying to find the right fit. And, I’m still experimenting with gear and open to trying new suggestions.

RW: Did you do any races during training to prepare?

DD: No—I hopped right into the triathlon. Forget trying to do even a 5K or find a swimming event. That was part of the absurdity of it. It was such an undertaking, I’ve never done anything like it before. I never did the race to win, I did it as an opportunity for personal health and to encourage other people to give it a try and to raise money for the Children’s Hospital of Los Angeles (CHLA).

RW: What was the best part of that first race?

DD: The rush of completing it was just such a high. When I crossed the finish line, I understood why people do it over and over again. It was great to raise money for CHLA, and I really just couldn’t believe that I did it. As soon as I crossed, I was like, “Okay, when’s the next one?”

After the race, the Malibu race director said they also put on a triathlon in Hermosa Beach, California, and he asked if I wanted to do that one, as well. And I said heck yeah, I’m already trained.

When I did Malibu, I was in the “celebrity division,” which they have to get as much attention on the race as they can, and raise money for charity. The Hermosa Beach one doesn’t have that, so I guess was in the Clydesdale division.

RW: How often do you do triathlons?

The Hermosa Beach race was really awesome, too, but after, I said I don’t think I’ll ever do this again. But the next year it came time to sign up for the Malibu Triathlon, and I thought, I could get back in shape again. That was so fun. I raised more money for CHLA and I just loved it. And decided to do Hermosa Beach again, too. I also wrangled Ed Helms (who played Andy) into doing the race with me.

I also did one in Miami a couple of times. For the most part, I’ve done the Malibu Triathlon consistently. I’ll take a year off here and there because I’m working on location somewhere, and can’t make it. Now, I think I’ve done 10 or 15 sprint triathlons. 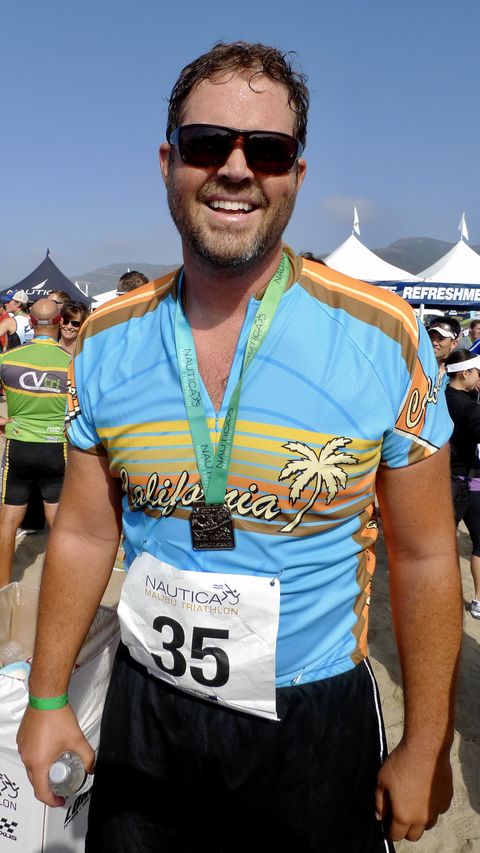 RW: What advice to you have to other people who want to start?

DD: Somebody said we’re not competing, we’re just here to complete. For me, it was about kicking myself off the couch and doing a triathlon, even though I didn’t believe it was possible. Now, I encourage anybody who has the inkling to try. It’s important for people that think about a triathlon as this impossible task is to know that it’s definitely not. A lot of people are like “What? I could never do an ocean swim,” but I promise you can do it.

Then, to their amazement they do it and complete it. (In all fairness, how easy it is does depend on the weather.)

RW: Do you do any kind of training year-round to stay in shape?

Then, that email comes out to sign up for the Malibu Triathlon in spring, and I realize I haven’t been on my bike since September. Then I have to get starting getting my gear set up and hope I can remember how to ride.

I wish I had more commitment to training all year round because it’s such a great thing for your health.

RW: Do you have any friends you train or race with?

DD: I have a couple buddies who have done the Malibu triathlon, and want to continue training. We encourage each other to get out there and get rides in over the weekends. It’s always a really fun communal experience, and I’ve really been missing it so much during COVID. Hopefully by next fall the Malibu race will be on and I can give it another go. 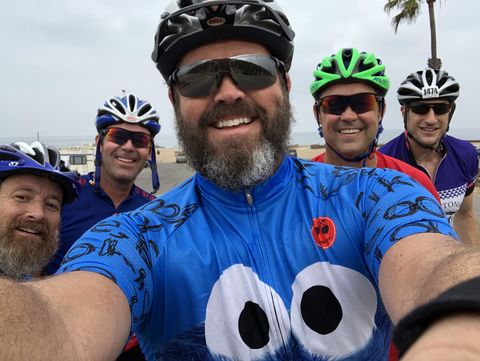 RW: What are you goals for the future?

DD: I’d like to keep doing these into my 50s. The older I get, I think that it doesn’t seem as possible, but I think it would be really awesome.