From the moment transgender athlete Lia Thomas began to make waves in American college pools, world swimming knew a moment of reckoning would soon arrive at the highest levels of the sport.

FINA, swimming’s governing body, has now taken decisive action in the minefield of transgender policy, introducing the strictest framework in Olympic sport as it effectively bans male-to-female transgender swimmers from racing at elite levels unless they transitioned before the age of 12.

It’s a monumental step that goes well beyond sports like cycling, which last week introduced its own transgender policy requiring a two-year transition period and monitored testosterone levels of 2.5 nmol/lt. Other sports may follow in swimming’s wake now a hardline path has been forged on an issue that is divisive, complex, politicised and charged with emotion. 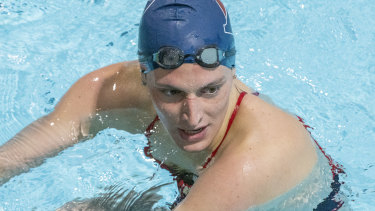 And it all traces back to Thomas, who was an unremarkable male swimmer at the University of Pennsylvania before transitioning in time for the 2021-22 season. Thomas would go on to become the first transgender NCAA champion when she won the 500 yard freestyle in March, attracting national and international attention.

Soon, she would become a lightning rod in a sports and culture war. When she indicated that she wanted to one day swim at an Olympic Games, FINA knew it had no choice but to fast-track a new transgender policy that addressed the growing resentment among its cisgender female athletes, many of whom – including Australian stars Emma McKeon and Emily Seebohm – had concerns about the fairness of racing athletes who went through male puberty.

Now Thomas can never race at a major FINA-sanctioned meet. Its members met in Budapest on Sunday to hear a report from a taskforce of medical, legal, ethical and sporting experts who recommended a new ‘open’ category be created to accommodate athletes who didn’t fit into neat gender identities. 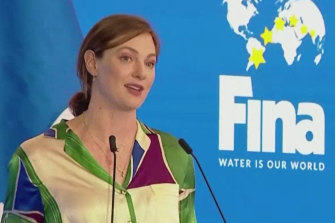 It was passed by 71 per cent of the 152 member nations, who had heard Australian great Cate Campbell make an impassioned speech about the importance of fairness as a cornerstone of international competition. After much soul-searching, she urged delegates to back the proposal.

“We see you, value you and accept you,” Campbell said of transgender swimmers. “My role, however, is also to stand up here, having asked our world governing body, FINA, to investigate, deliberate and uphold the cornerstone of fairness in elite women’s competition.

“And it pains me – that this part of my role – may injure, infuriate and, potentially, alienate people from an already marginalised community.

“Believe me, I have wrestled long and hard with myself, with what to say and do. I am aware that my actions and words, no matter what I say, will anger some people – whether they are from the [transgender] community or from the cisgender female community.”

Many athletes had been afraid to speak out over the issue but others, like former British swimmer and advocate for a more aggressive transgender policy Sharron Davies, hailed it as a victory for common sense.

“I can’t tell you how proud I am of my sport, FINA and the FINA president for doing the science, asking the athletes and coaches, and standing up for fair sport for females,” Davies said.

“Swimming will always welcome everyone, no matter how you identify, but fairness is the cornerstone of sport.”

Now the wait begins to see the ramification for other elite sports and whether the ruling will trickle down to the community level, something that has long been feared by transgender advocates and other experts in the field.

Dr Catherine Ordway from the University of Canberra, a leading voice in sport integrity, said FINA had simply found the issue too complex and ended up “taking a hammer to a walnut” with their policy.

“That’s exactly what has happened. They have just put a blanket ban over all transgender athletes instead of taking a nuanced, sophisticated approach where we treat case as an individual, which is the smart thing to do,” Ordway said.

“That means now and forever. You can’t compete in Masters swimming when you are 70 if you transitioned when you were 18. How is that fair? I don’t quite understand why they are taking a hammer to a walnut.”

The International Olympic Committee (IOC) updated its transgender policies after the Winter Olympics in Beijing but its document was criticised for lacking substance, overflowing with platitudes and handballing the issue back to the sports.

Now it has come home to roost for the IOC, which preaches inclusiveness but only managed to empower the powerbrokers of one of its biggest sports to take the most dramatic action yet seen by administrators.

Having Thomas swim at the Paris Olympics would have created one of the highest-profile controversies at a modern Games. FINA had squashed that prospect two years out, potentially saving them and the IOC from a media circus in France.

Should other major sports draw inspiration from the tough stance of swimming officials, the great transgender sporting debate could be over before it really began.