That’s how Sydney Sixers general manager Jodie Hawkins described the special COVID-inspired odyssey on which her players and coaching staff were about to embark on the eve of the Big Bash League. 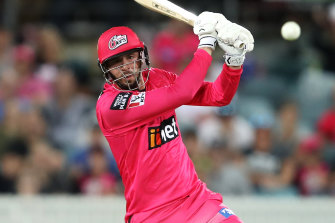 James Vince starred with the bat for the Sixers in their win over the Scorchers.Credit:Getty

“I said at the start of the season that the team that rolls with these restrictions the best will win the comp,” Hawkins says. “It’s like being with all your cousins on this crazy road trip that never ends. We’re lucky at the Sixers because we have a ‘no dickheads’ policy and our culture has really helped during this tournament. We’ve got some strong senior players so, when one of the guys has a bad day, they are there for each other.”

One player who is entitled to more bad days than most is English import James Vince, who is best known of late for his unbeaten 98 in the nine-wicket victory over the Scorchers in last Saturday night’s qualifier at Manuka Oval.

Vince shot daggers at Perth quick Andrew Tye after Tye bowled a bouncer over the top of his head. The ensuing wide meant the Sixers won and were through to the final — but left Vince stranded two short of his century.

The Englishman has brushed aside questions about the incident all week, repeating a team-first mantra, and when you consider his journey since mid-November you can understand his sense of perspective.

‘It helps that I’ve played with the Sixers for a few years now and know people well. It’s a great group of lads.’

Vince, 29, has his wife, Amy, and two young children — Eliza, 4, and Jasper, five months — sitting at home in England in isolation, relying on morning FaceTime chats.

The life of a T20 gun-for-hire means you’re often on the road, but Vince in normal times can have his family with him, as he did last season when he helped the Sixers to the BBL title.

The coronavirus has made things tricky for the likes of Vince.

In mid-November, days before he was due to fly out for the Pakistan Super League finals in which he was representing the Multan Sultans, he tested positive to COVID-19.

Vince was asymptomatic but it meant he was forced into isolation for 14 days and didn’t get to Pakistan at all. He tested negative then flew to Australia and went into hard lockdown in Perth for a further 14 days before starting up with the Sixers. 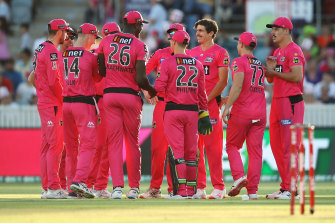 Former Australian captain Ricky Ponting has commented on the apparent closeness of the Sixers’ playing groupCredit:Getty

“Then, after this Saturday’s final, I fly home for a week before leaving again for the PSL,” Vince explains. “Seven days at home will be great with the family, but leaving so quickly again … I don’t think my daughter will understand that I have to go away again. I’ll just have to explain it best I can.”

You ask him if all this is all worth it. Has he ever questioned whether he should just pack it in and fly home?

“At certain times this season, I have,” he concedes. “It helps that I’ve played with the Sixers for a few years now and know people well. It’s a great group of lads. But there are times when you ask if you are doing the right thing by your family.”

There’s a potential thesis in the way some sporting teams have dealt with COVID-19. The uncertainty, disruption and isolation bring into sharp a team’s culture and professionalism.

The Melbourne Storm, predictably, used their relocation to the Sunshine Coast to their advantage, culminating in their NRL grand final victory over Penrith.

Cracks appeared in the Australian cricket team’s culture over the summer as questions were asked of coach Justin Langer’s fastidious methods after months on the road, living in bubbles, locked away from family.

On the flipside, the tougher things got for India, the more they thrived.

To understand the closeness of the Sixers, you only needed to witness the jubilant scenes on the boundary after Vince and Daniel Hughes walked from the ground after the win over the Scorchers.

“That’s a close team playing for each other,” Ricky Ponting said in commentary for Seven.

Says Vince: “I can’t speak for the other franchises, but if there was a group that didn’t get on quite so well, there would be more scope for them to have issues. We’ve just got on with it. We’ve spent more time with each other than we’d normally want to. There’s been times when it’s been pretty tough, but we turned around and made it as easy as it could possibly be.”

The end is in sight. Like the Griswolds tearing into the carpark at Wally World, the Sixers’ roadtrip is almost complete. All they need to do now is claim the weirdest BBL title ever.