A member of the US fencing team knelt on the podium during the national anthem and medal ceremony on Friday at the Pan American Games in Lima, Peru, later saying on Twitter: "We must call for change."

Race Imboden, an Olympic medalist and part of the men's foil team that won gold at the Pan American Games, wrote on Twitter that he demonstrated because of "racism, gun control, mistreatment of immigrants, and a president who spreads hate." 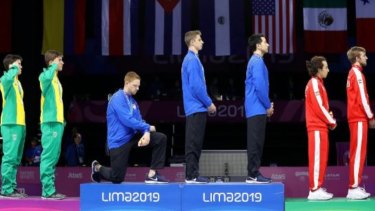 Statement: Race Imboden takes a knee during the national anthem and medal ceremony on Friday at the Pan American Games in Lima, Peru. Credit:Twitter

"I chose to [sacrifice] my moment today at the top of the podium to call attention to issues that I believe need to be addressed," he tweeted. "I encourage others to please use your platforms for empowerment and change."

At the Pan American Games, Imboden, 26, shared bronze in men's foil with Canadian Maximilien van Haaster. He was part of the American team that won gold in team foil with Gerek Meinhardt and Nick Itkin. His two teammates stood as the national anthem played.

Imboden's demonstration happened amid a larger national discussion on issues that include gun control, which came in the wake of recent shooting rampages in El Paso, Texas, and Dayton, Ohio. Amid that discussion has continued, some have noted President Donald Trump's tweets and remarks about immigrants. The suspect in the El Paso shooting, which left 22 people dead, told authorities that he was targeting "Mexicans," according to police.

"It'd be a lot better if people in power got off their asses and got something done," he told reporters.

Golden State Warriors Coach Steve Kerr, who is an assistant coach for Team USA, told reporters that "somebody could walk in the door in the gym right now" and open fire.

Bedoya, a former U.S. national team midfielder, delivered his message during the Union's 5-1 win over D.C. United on Monday, running to a microphone at Audi Field after he scored a goal.

"I'm not going to sit idly by and wait for things to happen 50 years from now," Bedoya said 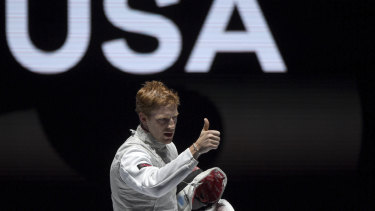 Speaking out: Race Imboden has encouraged others to use their profile to call attention to the pressing issues confronting America.Credit:AP

"You can't have a non-profit with this mission statement then open your doors to Trump," Stills tweeted.

He said Thursday after a preseason game during which he, too, knelt during the national anthem that he received death threats over his comments but was undeterred.

"Someone has to have enough courage to let him know he can't play both sides of this," Stills said, via ESPN. "It's something that I can look back on and say I made the right decision. Maybe I shouldn't have done it on social media, but I did. If you're going to associate yourself with bad people, then people are going to know about it. I put it out there for everybody to see it.

"If you say you're going to be about something, let's be about it."