One of the world’s best rugby players isasking for donations from the public after he was fired last month for saying “hell awaits homosexuals.”

Wallabies full-back Israel Folau, 30, was sacked in May by Rugby Australia over homophobic social media posts he made in Apri.

He was found to have committed a “high-level breach” of the code of conduct with the posts after having previously been warned over making homophobic comments on social media in 2018.

Speaking at a press conference at the time of his dismissal last month, Rugby Australia chief executive Raelene Castle said that the dismissal was an “unwanted distraction” but added “our clear message for all rugby fans today is that we need to stand by our values and the qualities of inclusion, passion, integrity, discipline, respect and teamwork.”

Read more: The career of one of the best rugby players in the world appears to be over after his Instagram post said ‘hell awaits’ homosexuals

She went on to say she had spoken to players to “make it clear that Rugby Australia fully supports their right to their own beliefs, and nothing that has happened changes that.

“People need to feel safe and welcomed in our game regardless of their gender, race, background, religion or sexuality.

Folau believes the termination of his contract was “unlawful and an act of religious discrimination,”according to the BBC, and is now seeking financial help from the public after filing a case against Rugby Australia and Rugby New South Wales at the Fair Work Commission earlier this month.

Read more: One of the world’s top rugby players is fighting to keep his job after saying that ‘hell awaits’ gay people

On Friday, he launcheda crowdfunding campaign with the goal of raising $3 million UAD ($2.1 million) to help with his legal battle.

On the GoFundMe page, he writes: “Earlier this year, I uploaded some messages from the Bible on my Instagram page. I believe that sharing the Bible is an act of love and compassion.”

He goes on to say: “Sadly, after I uploaded the messages from the Bible, my employers, Rugby Australia and Rugby NSW, tore up my employment contract. As a result, I have lost my job, my livelihood, and the ability to play for my country. It looks like I will never be allowed to play rugby in this country again.”

He says he believe the termination of his contract is “unlawful,” and confirms he has “started legal proceedings against Rugby Australia and Rugby NSW.”

“Rugby Australia have already said that they will ‘divert significant resources’ to fight me in court,” he writes. “Even if I win, Rugby Australia can appeal. There is every chance that a prominent test case like this could take years and eventually end up in the High Court of Australia.

“My wife Maria and I have already spent over $100,000 of our own money, and that was just to try and deal with Rugby Australia’s internal tribunal processes. The money I am asking for is solely to fund the rest of my action in court.

“I know I am putting myself on the line — this action will be very costly in terms of time, money and reputation — but I do not intend to stop now.

“I would be very grateful for your support. Could you make a donation, within your capacity to give, in order to support my legal action? I have the fight of my life on my hands and every little bit will help.” 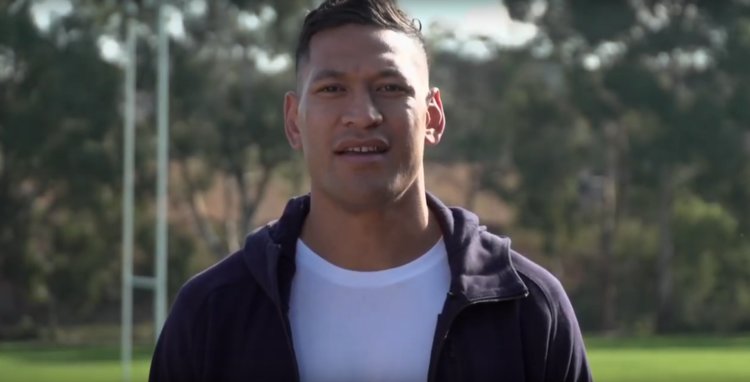 Ina video promoting the fundraising campaign, he said: “Every Australian should be able to practise their religion without fear of discrimination in the workplace. Even people who don’t share my beliefs have defended my right to uphold and express them. If you want to join this journey with me, to fight for the right to freedom of religion, please donate.”

He added inan Instagram post: “Some people have questioned why I am putting myself, my reputation and my future on the line by taking on Rugby Australia when the easier path may have been to hide my faith.

“I believe what is easy is not always right. My faith is who I am and if I don’t stand up for it, what hope is there for a person of less resources who is discriminated against in the workplace?”

At the time of writing, $385,324 had already been raised by 4,688 people as part of the campaign for Folau, who is believed to have been on a four-year deal worth $5 million.