‘Are you kidding me?’: Australia’s beach volleyballers blow up

When you think of beach volleyball, do you think of that epic battle on the sands just outside Miramar when Maverick and Goose lathered themselves in baby oil before taking on arch-rivals Slider and Iceman, only for Maverick to take off at the last minute because he was late for a dinner date with Kelly McGillis? 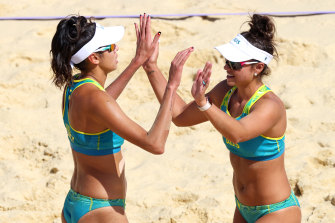 Nor do I think of a makeshift court in the middle of a former flea market in Smithfield in central Birmingham, yet here we are as Tokyo silver medallists Mariafe Artacho del Solar and Taliqua Clancy do battle with the might of Sri Lanka on Sunday afternoon.

“Oh, this is normal for us,” Clancy said after the pair’s straight-sets victory over Deepika Bandara and Chathurika Madushani. “We never play on beaches. It’s rare for us and that’s the beauty of our sport: you can literally whack it in the middle of the city and play it anywhere and have an amazing atmosphere and bring people together.”

It certainly did that as the sun beat down on a packed crowd and a DJ spun bangers from House of Pain, 50 Cent, Dua Lipa and Calvin Harris.

Another highlight was the spritely dancers who entertained fans between breaks, including an enthusiastic conga line begging to be joined. 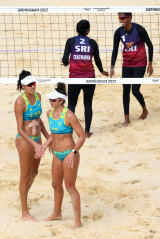 The Australian pair were not impressed by one call from the referee.Credit:Getty

Like Top Gun fighter pilots, the Australians won via clinical precision, although there were two moments of high drama that could have derailed their opening pool match.

First, the announcer described the colour of the Australian outfit as “canary yellow”.

(As Bill Lawry said on the Twelfth Man: “Canary yellow! That’s Australian gold my friend and don’t you f—ing forget it!” )

The second moment of controversy came in the second set when the referee penalised Clancy for a “carry”. In other words, she held onto the ball for too long when setting up Artacho del Solar for the money spike.

She eyeballed the ref and barked, “What was that? Are you kidding me?”

To his credit, he remained unmoved.

“They said I carried,” Clancy said afterwards. “I DO NOT CARRY. There’s always been a rule but they’re being all sensitive on it. That was not a carry. I was pretty cranky. I think I have very good hands, so I get very insulted.”

Artacho del Solar said: “I feel like he just wanted to get involved.”

They said this with cheeky smiles, bless them, but there is some serious business at hand here at the former flea market, where a Mexican wave between points was the closest thing to an actual wave.

Clancy (who wears her Indigenous pride on her painted fingernails) and Artacho del Solar (who is originally from Peru) paired up just before the 2018 Commonwealth Games on the Gold Coast, where they claimed silver.

Then came their heroics last year in Tokyo, when they captured the hearts and minds of those of us in COVID-19 lockdown in Australia, claiming silver once more. A medal of a different hue is on the agenda here in Brum.

Has their profile increased since Toyko? 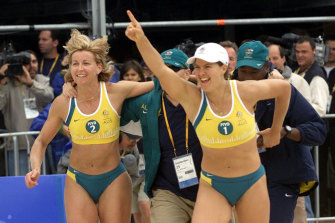 Kerri Pottharst and Natalie Cook celebrate their gold at Bondi at the Sydney 2000 Olympics.Credit:Getty

Do they covet the same attention as Kerri Pottharst and Natalie Cook, who won gold on Bondi Beach at the Sydney Olympics?

“Not at all,” Artacho del Solar said.

And with that, the pair turned left and did a samba down the runway of the mixed zone and into the afternoon.

What a shame it wasn’t a conga line. I would’ve joined in.

Their second pool match, against the pair from Trinidad and Tobago, is on Tuesday.

“Are you people of authority?” asked one female fan after the beach volleyball, looking at the accreditation lanyard around our necks.

No. We’re reporters. No authority.

“Well, report on the fact there are two toilets for women and four for men,” she continued. “That’s discrimination.”

She has a point. 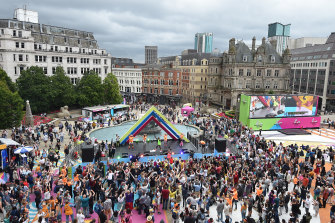 The queues for food at the Commonwealth Games in Birmingham have been a talking point.Credit:Getty

Of equal concern are the enormous lines for food and drink at every venue. Then there’s the prices: $17 for “sausage and chips”. You don’t even get a piece of bread.

While Birmingham got around the Commonwealth Games, the rest of the UK got around England’s women’s football team in the final of the European championships.

England triumphed 2-1 after extra time in an epic final against Germany at Wembley.

The scene at the Craven Arms hotel was wild. “Well there’s the headlines tomorrow,” mused one local.

It was interesting to note that both captains wore rainbow-coloured armbands.

Amazing! Nobody died. Actually, nobody even spoke about it.

THE QUOTE
“Bitter love triangle hits awkward Commonwealth Games squad — with links to Miley Cyrus.” — Good to see British tabloid The Daily Star has toned down its coverage since Kyle Chalmers’ impassioned plea for the media to leave him alone and be “positive”.

THUMBS DOWN
England cyclist Matt Walls crashed into the crowd during the final lap of the men’s 15km scratch race, leaving one young fan “covered in blood”. Walls was trying to avoid another crash. The race was abandoned and a second cyclist, Matt Bostock from the Isle of Man, was taken away on a stretcher.

Sports news, results and expert commentary. Sign up for our Sport newsletter.