Gwangju, South Korea: The benchmark may still be the United States but coach Jacco Verhaeren is convinced Australia are not far behind despite gold evading them on the world swimming titles' final night in South Korea.

The Americans were again convincing victors of the eight-day meet at Gwangju, breaking the Australian women's relay dominance on Sunday night. 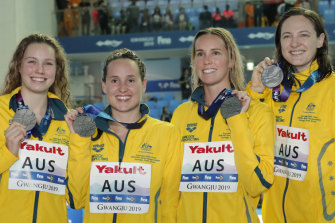 Earlier Duncan Scott produced the second fastest leg in history to snatch men's 4x100m medley relay gold for Great Britain from the US with Australia missing a medal.

The Australian women were looking to complete a relay sweep in the medley final.

In fact the Dolphins had won four of the previous six relays overall, marking the first time the men and women had secured the 4x200m freestyle title at the same world titles.

It ensured the US topped the tally with 27 medals, including 14 gold.

Australia were second with five gold and 19 medals.

It is a remarkable turnaround since Australia's dismal 2017 world swimming titles.

Their Gwangju tally almost doubles their medal count two years ago when they finished a lowly eighth with 10 medals and a solitary gold, failing to win a single relay event.

"USA is by far the favourite next year (Olympics)," Verhaeren said.

"We need to bring our best game next year to be able to stay close. 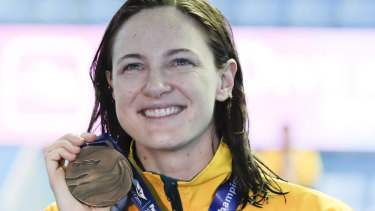 "And we know these world championships don't guarantee the same amount of medals (at Olympics) but it does show we are the No.2 in the world and I think that is something to be very proud of."

Verhaeren said their Gwangju effort showed the five week preparation they had trialled may just give them the Midas touch at Tokyo.

"I couldn't be happier with the team," he said.

"Let's say when we started this path and where we wanted to go, I think this is it, this is what we need to do.

"Everyone needs to take a bit of a break after this, reflect and think how can I do things better but we are up there with the world's best." 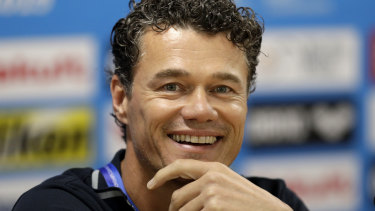 Australian swimming head coach Jacco Verhaeren said he “couldn’t be happier with the team,” after their performance in Gwangju.Credit:AP

Matthew Wilson equalled the 200m breaststroke world record in the semi-finals, only to be relegated to silver after Russian Anton Chupkov set a new mark of his own the next day.

However, the standout was Olympic champion Kyle Chalmers' mighty 100m freestyle battle with Caeleb Dressel, clocking 47.08 – third on the national all-time list – to grab silver behind the American superstar.

Dressel finished with a personal tally of six gold and two silver.