Cameron’s Giants too strong for Saints

If Jeremy Cameron claims the Coleman Medal he is surging towards, there may be a place for it in the Manuka Oval boardroom – for this is quickly becoming the house he built.

Sure, the Canberra venue is already steeped in history – think Don Bradman turning out for the Prime Minister's XI and decades of sporting contests that have gone before the inception of the GWS Giants – but rarely has one player held such a stranglehold over the venue, one Cameron built on in an undermanned Giants' rout of St Kilda on Saturday. 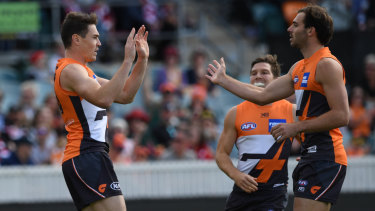 Jeremy Cameron (left) boots another goal for the Giants.Credit:AAP

Cameron booted six goals to extend his lead atop the leaderboard with 30 overall, and take his tally in Canberra to 49 from 18 games.

It came on the same day reports emerged of Geelong launching an audacious bid to sign the foundation Giant.

The Giants clocked up a half-century in the opening term and for some time it seemed as though Cameron was closing in on that eight-goal game any star forward would covet.

Cameron's dominance inside forward 50 was perhaps a timely reminder of just where St Kilda sit after his namesake, Giants coach Leon Cameron, lauded them as "the real deal".

For a few fleeting exchanges they showed enough to suggest they just might be. But the rest of the contest shows just how big the mountain ahead of Alan Richardson's side truly is.

The Giants seemingly shifted into cruise control during the second term and struggled to replicate their exceptional start as St Kilda clawed their way back into the contest.

It was in that period the Giants sorely missed the class of co-captain Phil Davis (ankle), who was a late casualty alongside Josh Kelly (adductor), leaving the pair alongside Lachie Whitfield (cork) to watch from afar.

The star trio are likely to come back into the fold next week for a Giants outfit that again failed to get through a game unscathed. 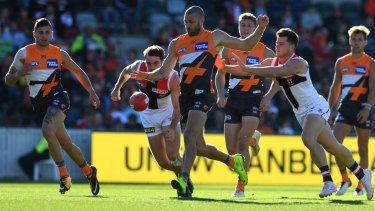 Sam Reid clears the ball for the Giants in Canberra.Credit:AAP

Davis' inclusion would be absolutely vital going forward after Aidan Corr was struck down with a leg injury in the fourth quarter, while Adam Kennedy was helped from the park having worn a Jack Newnes knee to the head in the second term.

But St Kilda's resistance was ultimately futile as Cameron clicked into gear once more.

St Kilda have been among the surprise packets of the competition through the opening six rounds and are defying many expectations to find themselves in the top-eight mix.

But the tests are coming thick and fast – they host the reigning premiers next week and must avoid the start they endured in Canberra.

It left the Saints on the back foot and made any charge moot as they failed to rein in the Giants as they built on their impressive record in the capital.

A loss to Fremantle a fortnight ago still stands as the Giants' only defeat at Manuka Oval since 2015 – and their next test may be the toughest yet.

The Giants welcome Hawthorn to the capital in August, by which time both sides should be looking to lock down spots in the eight. But Cameron will be the first to tell you there is a long road ahead.