Home » Sport » Conor McGregor is still the No.1 threat to Khabib Nurmagomedov, according to the Russian wrestler’s trainer 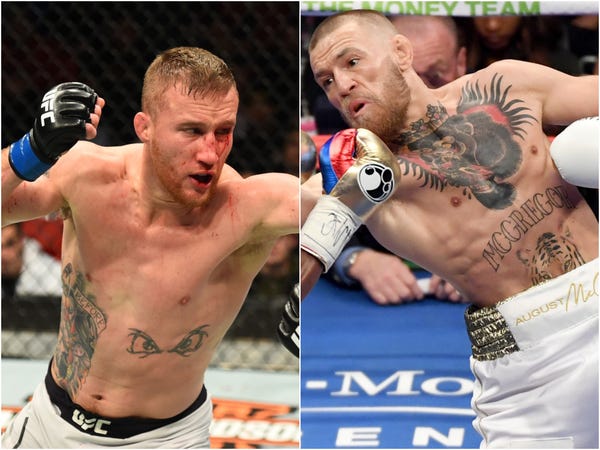 FIGHT ISLAND — Conor McGregor is still the No.1 threat to Khabib Nurmagomedov and would beat Justin Gaethje in a fist-fight.

That's according to Nurmagomedov's trainer Javier Mendez, the founder of the American Kickboxing Academy in California, who held court with the MMA media Thursday at a Fight Island press event attended by Insider.

Mendez told the media that Gaethje only become an interesting subject to study when he realized the American was becoming an immediate threat to his athlete.

Tony Ferguson was long deemed the next contender to Nurmagomedov's UFC lightweight championship but Gaethje bludgeoned Ferguson in May, stopping him in the fifth round.

This sowed the seeds for Saturday's UFC 254 showdown on Fight Island, Abu Dhabi.

Regardless of Gaethje's exploits, Mendez said this week that a McGregor rematch remains the greatest challenge to Nurmagomedov, because of various successes he had during his fourth round loss to Khabib in 2018.

"I thought when I looked at [Gaethje during Ferguson fight], I thought he was the second-biggest [threat] because I still to this day believe Conor was.

"The reason I believe Conor was is because of the precision striking.

"Justin could easily prove me wrong and prove to be the toughest test we've already had. We've already seen Conor, and that's why I say Conor.

"If you think about it … who has won a round against Khabib? Conor. And who has given Khabib a tough time in the first round? He took Conor down but how much damage did Khabib give him?"

Mendez shook his head as if to answer his own question.

"No. Conor was very, very good there. So, I have to give it to Conor.

"I haven't seen Justin. But if I've seen Justin and we fought him already and we are victorious like I'm hoping, then I can tell you 100% the toughest … but right now I think in theory he's [the] No.2 [threat to Nurmagomedov]."

As for who would win in a fight between Gaethje and McGregor, Mendez picked the Irishman — again, because of his precision striking.

"I say Conor," said Mendez. "[It's because of] the precision striking, and the reason I say Conor is because Gaethje's not going to engage his wrestling.

"He's going to do what he always does and stand. If you're doing that with Conor, I'm sorry, unless you're going to knock him out you're not going to beat him. I don't think so. That's just my opinion."

'You have to kill to stop him,' Mendez said of Gaethje

Mendez said the manner in which Gaethje "dismantled" Ferguson in the UFC's first pandemic-era fight card made him aware of how truly great he is.

"In 2019 a question was posed to me about [what I think about] him and in that particular time I didn't really think much of him because I wasn't paying attention to him, so I said, 'I don't.'

"I didn't pay attention until he dismantled Tony because now he's real, he's in front of us. So now I paid attention and saw how great he actually is, and what a challenge he is.

"It's the striking and the D1 wrestling which has a big impact," said Mendez. "He's the best kicker in the business, I believe, at 155-pounds over everybody.

"He's a true warrior," he said. "There's no quit in him. You have to kill him to stop that guy. Both of those guys. It goes in the middle, it goes [against] the cage. He's giving it his all.

"You've seen what type of person he is, great warrior, mentality. How can you not love him, respect him?

"Obviously I am Khabib's coach and I love him and want him to win, and we're doing everything we can but Justin is as incredible as they come in every department.

"Mental, physical, how he approaches the fight game, and how he acts — he's great."

Mendez trained Nurmagomedov for years in conjunction with the fighter's father, Abdulmanap Nurmagomedov.

Abdulmanap died in May after coronavirus complications, and so now Mendez's role has become even more important.