Home » Sport » Cristiano Ronaldo and Lionel Messi should not have been included in FIFA's world team of the year, Liverpool star says

Cristiano Ronaldo and Lionel Messi should not have been included in FIFA’s world team of the year.

FIFA announced the line-up — which is voted for by fellow professional players from around the world — at”The Best FIFA Football Awards” in Milan on Monday, September 23.

The XI consisted of a number of familiar faces, including Messi and Ronaldo, both of whom have made the cut every year since the award’s inception in 2016.

Wijnaldum, who scored Liverpool’s only goal in a 1-0 win over Sheffield United on Saturday, however, believes neither should have made the team this year, and instead should have been replaced by two of his own teammates — Sadio Mane and Mohamed Salah.

“Different players have their own opinions,”Wijnaldum told The Athletic. “I think for some they probably just wrote down what they regard as their best XI rather than who the best XI was over the course of the year, which is different.” 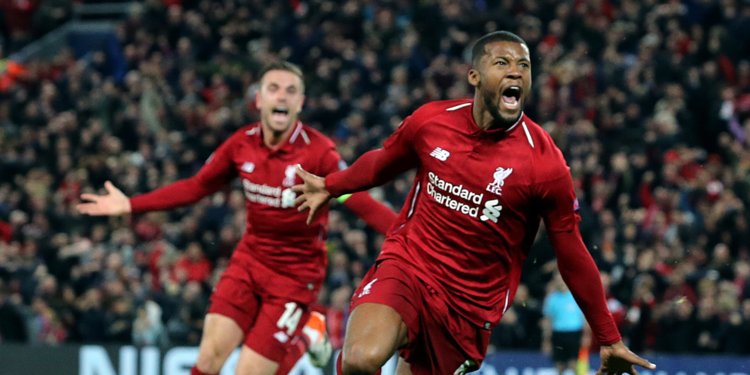 Wijnaldum added: “Ronaldo and Messi will always be there even if they haven’t had a great season. Maybe it needs to change. There are players who should be there.

Read more: 2 teenage soccer stars who once played together as children could soon become the sport’s biggest rivals since Lionel Messi and Cristiano Ronaldo

In the Premier League, the duo managed 22 goals each, sharing the Golden Boot award with Arsenal striker Pierre-Emerick Aubameyang. Their combined goals helped Liverpool to a second placed finish in the division.

In the Champions League, Mane scored four goals, whilst Salah managed five as Liverpool went on to lift the trophy for the sixth time in its history.

Messi and Ronaldo also had strong campaigns however.

Messi was Europe’s top scorer in all competitions, finding the net 51 times for FC Barcelona as it won both La Liga and the Supercopa de Espana, and alsoscooped FIFA’s top individual prize— the “Men’s Best Player” award.

Ronaldo managed 28 goals in what was his first season at Juventus, helping his new side win Serie A and the Supercoppa Italiana.

Dani Alves says a 19-year-old Brazilian is the most talented young soccer player in the world, and his latest wonder goal for Real Madrid proves why