It was a tale of two weeks for Iowa.

Last week, the Hawkeyes were on top of the world with a win over Penn State that catapulted them to No. 2 in the latest AP Top 25 poll. On Saturday, Iowa was on the receiving end of an upset at the hands of Big Ten Conference rival Purdue. 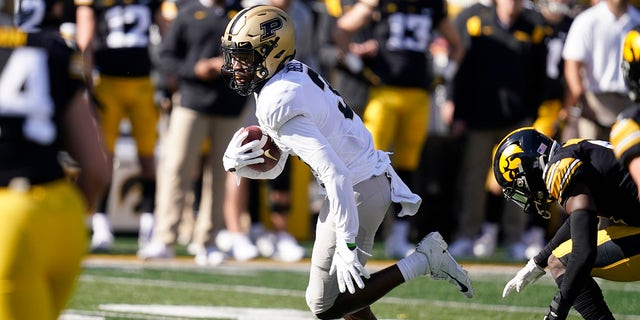 Purdue wide receiver David Bell (3) runs from Iowa defensive back Matt Hankins, right, after catching a pass during the first half of a game Saturday, Oct. 16, 2021, in Iowa City, Iowa.
(AP Photo/Charlie Neibergall) 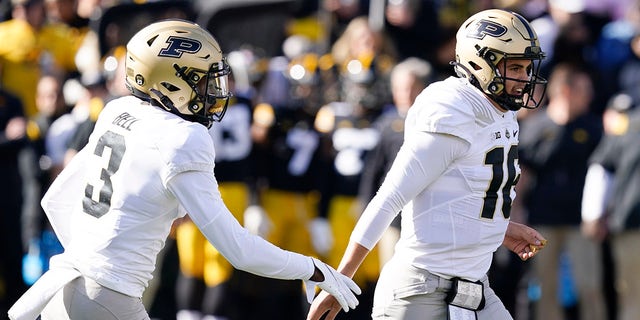 Purdue quarterback Aidan O’Connell (16) celebrates with wide receiver David Bell (3) after scoring on a 6-yard touchdown run during the first half of a game against Iowa, Saturday, Oct. 16, 2021, in Iowa City, Iowa.
(AP Photo/Charlie Neibergall)

The Purdue defense was all over Iowa quarterback Spencer Petras, who threw four interceptions in the game. Cam Allen had two of the picks, and Kieren Douglas and Dedrick Mackey had the others. Petras finished 17-for-32 with 195 yards. 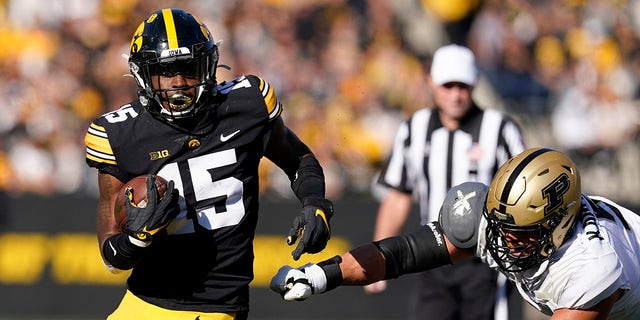 Purdue moved to 4-2 on the year, and Iowa dropped to 6-1 after last week’s Penn State win. The loss snaps the Hawkeyes’ 12-game winning streak and puts a damper on their hopes of making the College Football Playoff.