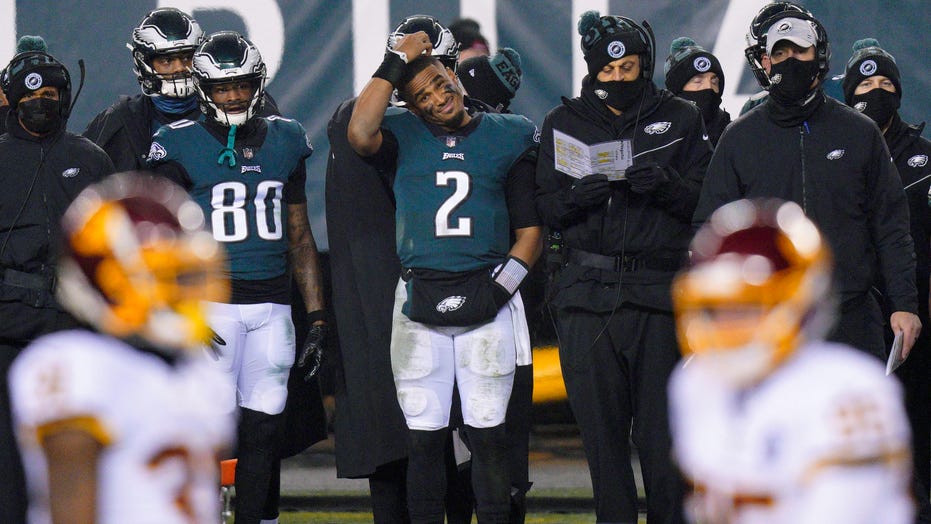 Doug Pederson found himself in hot water with New York Giants fans after appearing to tank a critical game against Washington on Sunday but reports on Tuesday indicated that the head coach is now on the outs with several people within the Philadelphia Eagles organization as well.

Sources told The Philadelphia Inquirer that two defensive players had to be held back from a heated sideline confrontation with Pederson while center Jason Kelce and another offensive starter approached the coach to ask why starter Jalen Hurts was pulled when the Eagles were only trailing by three.

JOE JUDGE BLASTS EAGLES: ‘WE WILL NEVER DO THAT AS LONG AS I’M HEAD COACH OF THE NEW YORK GIANTS’

The Giants did their part over the weekend to try and secure a playoff spot but they were dependent on an Eagles victory to lock it down. Pederson offered no help when he pulled Hurts, who had run for two touchdowns, late in the fourth for third-stringer Nate Sudfeld, who hadn’t thrown a pass since 2018.

Sudfeld, not surprisingly, struggled — he threw an interception on his second pass and lost a fumble.

Philadelphia, just a touchdown away from tying it up, lost the game and with it, ended New York’s chances of making the playoffs.

Pederson defended his decision, arguing that he had decided long before the game to give Sudfeld field time, but several Giants members, including head coach Joe Judge, knew better.

"To disrespect the effort that everyone put forward to make this season a success for the National Football League, to disrespect the game by going out there and not competing for 60 minutes and doing everything you can to help those players win, we will never do that as long as I’m the head coach of the New York Giants," Judge said Monday.

Hurts apparently knew of the decision to play Sudfeld on Wednesday but appeared to disagree with Pederson’s following through with the plan considering the score. According to The Inquirer, the NBC broadcast of the game caught him saying, "That’s not right."

Sources told the Inquirer that staffers were unsure of who was truly behind the decision to pull Hurts and that it likely had something to do with the Eagles’ draft selection, which improved from 9th to 6th with the loss.

"As a competitor, I play to win," Hurts said during a post-game press conference. "You have to trust [Pederson’s plan]."