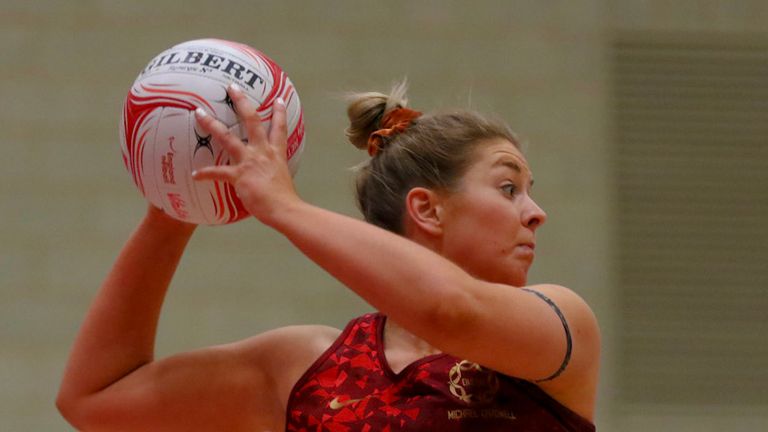 England claimed the Jean Hornsby Cup with a 67-44 victory over the Superleague All Stars on Friday night that earned them an unassailable 2-0 lead in the series.

The Roses, who had been due to face Jamaica in a three-game series that was cancelled due to the coronavirus pandemic, needed a strong second half to eventually see off the All-Stars – a team assembled at short notice from the best of the Superleague’s imports to replace the Sunshine Girls.

Karen Greig’s team had impressed in the first half on Wednesday evening before England’s familiarity told and it was a similar story on Friday night at the David Wallace Arena.

With Eleanor Cardwell and Nat Haythornthwaite again impressive and youngsters Razia Quashie and Sophie Drakeford-Lewis taking their chance, the Roses improved with each quarter to lead by four, seven, 13 and eventually 23 for a victory that claimed the Vitality Legends Series with one game to spare. 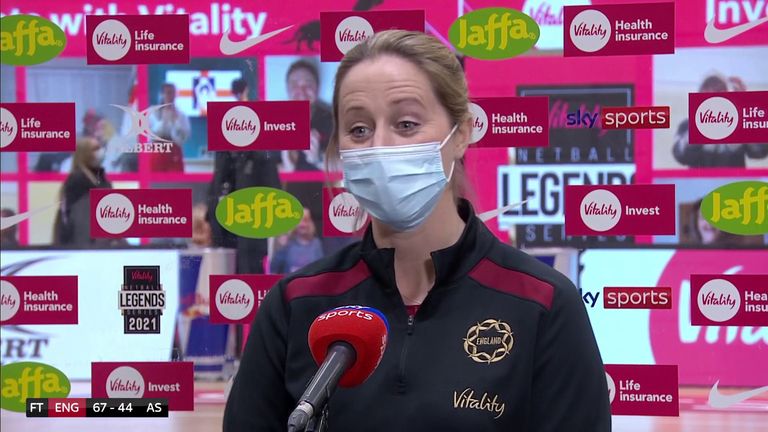 England coach Jess Thirlby is busy assessing her option with less than two years until the defence of their Commonwealth Games title in Birmingham and the Roses made three changes to the starting seven, bringing in Fran Williams, Laura Malcolm and Eleanor Cardwell while using her bench to its maximum.

Without the familiarity of the Roses squad Karen Greig, not surprisingly, stuck with the starting seven from the first encounter as they sought to build on an enterprising performance in the opening match of the series.

Once again their defensive end sparkled. Sam May and Jo Trip were a feisty presence in defence, while the mid-court offering of Nat Panagarry – dropping down from the Roses squad – Caroline O’Hanlon and Liana Leota offered bags of experience and no little quality. 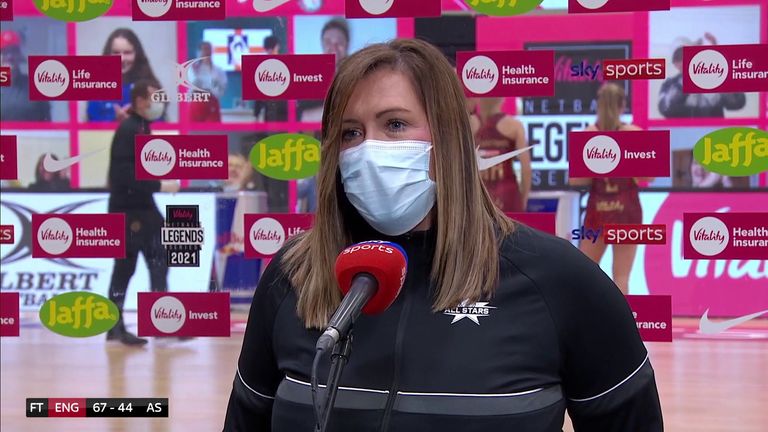 It’s tempting to think of the problems the All Stars could cause with more time to gel as they kept England honest throughout the first half but consistency from Cardwell and Helen Housby under the post and brilliant work in the defensive end from Fran Williams kept England in front.

Twice the All Stars managed to cut the gap to three on their own centre pass only to twice see Williams win crucial ball as England finished the second quarter strongly to go one better than the six-goal lead they had on Wednesday, with a 34-27 half-time advantage.

Sophie Drakeford-Lewis and Layla Guscoth came on at half-time as Thirlby continued to take the opportunity to rotate her squad and assess her combinations with the 2022 Commonwealth Games in mind.

The Roses extended training camp was always likely to be a crucial factor, their full-time programme in direct comparison to the All Stars’ quickfire assembly left Greig’s side playing catch-up through the second half.

Despite Thirlby continuing to ring the changes, Cardwell remained ice-cool under the post and the blossoming Quashie hugely impressive at goalkeeper for the second time in three days. 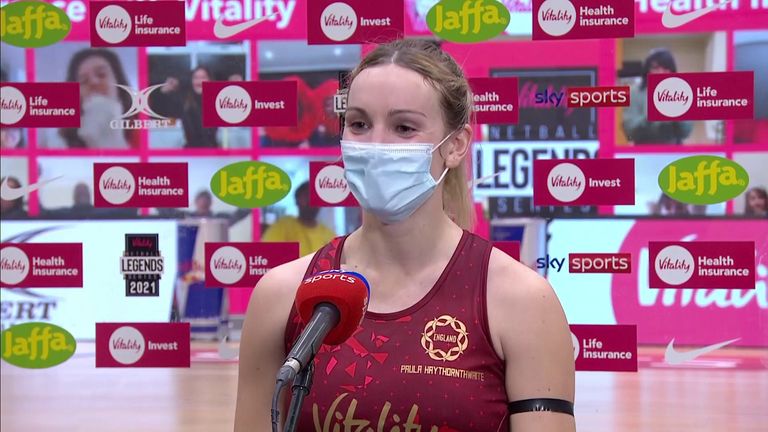 A seven-goal half-time lead became 13 by the end of the third quarter and when Thirlby took the opportunity to pair the emerging Drakeford-Lewis with Commonwealth heroes Housby and Haythornthwaite, the Roses attack end went from strength to strength.

With the defensive standing firm to limit the fatiguing All Stars, Housby led the way for England down the stretch, a flurry of goals, followed by her trademark overhead hand clap was the defining image as the Roses closed out a dominant 23-goal win.

“One of the key things that we wanted to fix from game one was our attacking play, it was actually brilliant that they started with the same line-up if I’m honest!

“We really wanted to address how we started today and I thought that we were much smarter with the ball today in attack.

“I’m generally really pleased. The line-ups and combinations that we were able to test today were really pleasing, and some of which haven’t been seen before.

“I think that Helen [Housby] and Sophie [Drakeford-Lewis] did pretty well and that’s an unusual circle, it was nice to get that one out there.

“I think that Nat [Haythornthwaite] is always pretty consistent and while we were making some changes around her, I think that it’s important to give some stability to the attack.

“Laura [Malcolm] has had quite a lot of outings in the WA role, so we were able to give her a little longer in the middle. It just afforded Nat the ability to run with a couple of different shooting combinations. I’m always impressed with Nat’s intent.”

Netball returns to Sky Sports with the Vitality Netball Legends series. Watch the second match on Sky Sports Arena and Mix on Friday from 5.45pm. All matches will also be streamed on the Sky Sports YouTube channel.