England look certain to preserve their 1-0 series lead going into the third Test against Pakistan after further rain prevented any play on the fifth morning at the Ageas Bowl.

A thunderstorm during the night soaked the outfield and left the surface unfit for the second Test to resume, with the umpires conducting three pitch inspections and eventually scheduling a fourth for just after the lunch interval.

Any prospect of a result in the match was already looking slim, with the players off the field since midday on day four after England had faced only five overs in their first innings, replying to Pakistan’s total of 236.

Zak Crawley (5*) and Dom Sibley (2*) were the not-out batsmen as the home side reached 7-1, while Rory Burns’ wicket was the only one to fall, caught at second slip off Shaheen Afridi for a fourth-ball duck.

Each day of the Test has been marred by poor weather conditions, with gloomy skies forcing the players off on the first afternoon and the recorded light meter reading restricting play on subsequent days.

Not a ball was bowled on the third day – and, with no play possible on the final morning, the 96.2 overs sent down in total currently stands as the fifth lowest number of deliveries in any Test match in England. 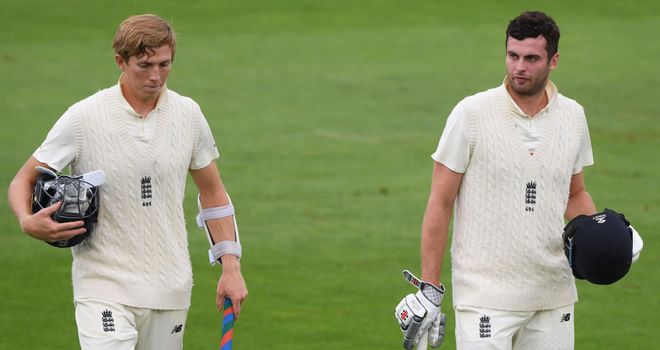 There has been no play since midday on day four, when Zak Crawley (L) and Dom Sibley left the field with England at 7-1 in reply to Pakistan’s 236

If there is no further play, it will become the worst weather-affected Test to be played in the country since 1931, when Douglas Jardine’s side reached 224-3 in 71 overs against New Zealand at Old Trafford.

The third and final Test of the series – also at the Ageas Bowl – gets under way on Friday from 10.30am, live on Sky Sports Cricket.