Home » Sport » ‘Everyone has sacrificed a lot’: Swifts still gunning for back-to-back premierships

NSW Swifts star Paige Hadley wants to make sure all the sacrifices she and her teammates have made during the 2020 season won't be for nothing.

Hadley had to leave her new fiance at home in Sydney when all the teams moved to the Queensland hub and the Diamonds mid-courter is determined to make the sacrifice count. 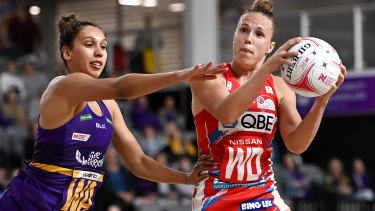 Paige Hadley and the Swifts have been in Queensland since the start of the Super Netball season.Credit:Getty

She says the 2019 premiers are still on track to go back-to-back, despite an underwhelming finish to the regular season. The Swifts fell from second to fourth place on the ladder before the season ended and face the West Coast Fever on Sunday in an elimination semi-final.

"We haven't come this far to make top four we want to be in that grand final," she said. "We've come here with a sole purpose to go back-to-back and now, it's all on the line."

"My fiance has been the one challenging me to be here and be in the moment … and I want to be here at the end of it."

The Swifts had a disappointing end to their regular season with a 77-77 all draw against NSW rivals the Giants. The squad was eager to build confidence going into the finals but managed to lose a ten-point lead with just five minutes to go. 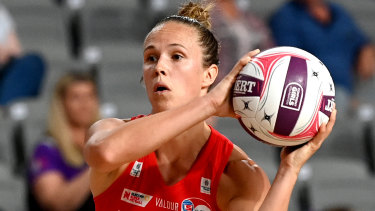 Paige Hadley and the Swifts want to make sure their time in the Queensland bubble hasn’t been in vain. Credit:Getty

"To let that slip was disappointing especially given they weren't missing any two-point shots," Hadley said. "Obviously we wanted to go into finals with that win and a lot of confidence."

The Swifts' journey to the finals has been anything but simple with injury plaguing their season.

The Swifts have been without defender Maddy Turner for much of the season due to an ankle injury, while Helen Housby has battled both injury and illness this season.

The Swifts are ultimately hoping to emulate the 2018 Sunshine Coast Lightning team, who came back from fourth place to take out the competition.

"Finals is a different ball game, you have to be in the four to have a crack at the premiership," she said. "We could have come in that second spot and it is disappointing … but in saying that you can win it from anywhere."

The Swifts are also eager to take advantage of the lack of any real home-court advantage this year, with the top-placed Melbourne Vixens also a long way from home.

"We have been relocated in the Sunshine Coast and the first round of finals is on the Sunny Coast, so it is like a home game for us," she said. "To be a champion is a journey and last year for us it wasn't always pretty, some games we had to grind out … in those do-or-die matches we really pull together."

Head coach Briony Akle said her side had been building over the last few weeks and is adamant her side will lift for Housby's 50th Super Netball game. Housby missed last week's game against the Giants due to a stomach bug.

"Helen is a player for the big occasion and an elimination final is a pretty big stage to play your half-century in," Akle said. "She's won a premiership with us, and won Commonwealth Gold, so having a player of that calibre come back into the squad is a huge boost ahead of the biggest game of the season.

"But Helen aside we have a team-full of premiership champions going out there to keep our season alive. We've to got the right soldiers, it's just about making the strategy work."

The Swifts play against the Fever at 1pm on Sunday.