The Australian Olympic Committee has expressed its strong disappointment after members of the men’s hockey team left the athletes village – a breach of COVID-19 safety requirements – to buy beer in the aftermath of the heart-breaking loss to Belgium in the gold medal match.

Five members of the Kookaburras have been reprimanded but they won’t be returning to Australia any earlier than normal. The hockey team flies back to Australia on Saturday. 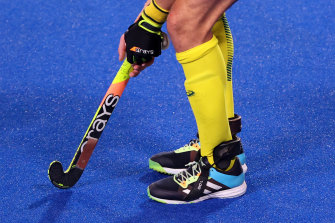 The Kookaburras lost to Belgium on penalties.Credit:Getty Images

“The Australian Olympic committee has reprimanded five members of the Kookaburras men’s hockey team after they left the Olympic village in the early hours … to visit a nearby convenience store,” Chesterman said.

Australia lost the gold medal match after a penalty shootout on Thursday night.

“A group of three players left the village and walked to a nearby convenience store at approximately 3am to purchase two cases of beer. The players were out of the village for a total of 20 minutes.

“The players were wearing masks at all time and there have been no concerns raised about how they conducted themselves while outside of the village or within the village.

“However players action were a clear breach of the COVID-19 protocols in place at these Tokyo Olympic Games.

“I’m deeply disappointed that the players breached the TOCOG [the Tokyo organising committee] and AOC playbooks and failed to play their role for ensuring other members of the Australian Olympic team stay safe.

“While I understand the players’ disappointment following their loss in the gold medal match, we’ve been abundantly clear about the expectations of this team while we’re in Tokyo.

“The rules are there to keep the team safe and for us to keep our commitment to the Games organisers and the Japanese people.

“The players did the right thing by self-reporting the breach to team management this afternoon.”

Chesterman said there would be no further action against the group of five.

“The players have apologised and are deeply remorseful.

“We’re not going to name the players. There is no need to name and shame … their teammates know who they are. The players did the right thing by self-reporting … all players have tested negative [after having COVID tests].

“The breach is deeply disappointing to me.”