‘Her dad would be so proud’: The force that drove McKeown to gold

Kaylee McKeown has put aside family heartbreak to triumph in the 100m backstroke final, winning her first Olympic gold medal and Australia’s third in three days in the pool.

The 20-year-old Australian from the Sunshine Coast turned in third place, 0.29 off the pace, but powered home to touch the wall first in 57.47. 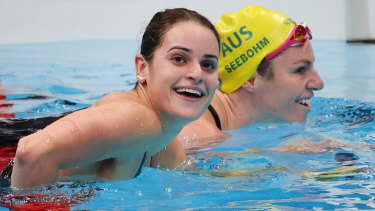 Kaylee McKeown after winning gold in the 100m backstroke. Credit:Getty

McKeown’s time was just 0.02 seconds off her own world record.

In her first Olympics, McKeown cruised through the heats and semi-finals to qualify third fastest.

With form on the board, McKeown delivered on the biggest stage of all, edging out Canada’s two-time world champion Kylie Masse (57.72) and American star Regan Smith (58.05) in a superb swim.

“It’s definitely something that people dream of,” McKeown said on Channel Seven. “Something I have dreamed of to make it reality. I’m just thankful I have a good support team.”

Asked if she had a message to her family, McKeown let fly an expletive.

“To dad: I hope you’re proud and I keep doing you proud,” McKeown said.

Her mother said: “Her daddy would be so proud.”

Australian Emily Seebohm, in her fourth Olympics, performed admirably, finishing fifth in a time of 58.45.

McKeown broke Smith’s world record at the Olympic trials last month in a time of 57.45, and put the world on notice, particularly given her ability to consistently clock fast times.

After losing her father to brain cancer 11 months ago, McKeown pushed on with the guidance of her coach Chris Mooney.

Heading into Tokyo, McKeown was the fastest in the world in the 100m and 200m backstroke events, plus the 200m individual medley.

However, on the eve of the Games, McKeown withdrew from the 200m IM to focus on her individual races.

Ledecky also won her semi-final (1:55.34) but the Australian qualified fastest.

“Happy with that,” Titmus told Channel Seven a day after her maiden Olympic gold medal. “I got hold of mum and dad last night quickly before I went to sleep. They were obviously still so hyped about it. It took me a while to fall asleep. Once I did, I woke up feeling pretty good.”

On Tuesday evening, Kyle Chalmers will get his individual campaign underway in the 100m freestyle heats.

The reigning Olympic champion swam a sensational final leg of the 4x100m freestyle relay on Monday to power Australia to third place, behind the US and Italy. His split time was the fastest of all 32 competitors in that final.