How Newcastle could line up if they land all ambitious transfer targets like Kroos, Hazard and Man Utd flop Van de Beek

NEWCASTLE are set to splash the cash in 2022 following the club's Saudi-backed £300million takeover.

The Magpies boast the wealthiest owners in world football, with Saudi Arabia’s Public Investment Fund worth an incredible £320billion. 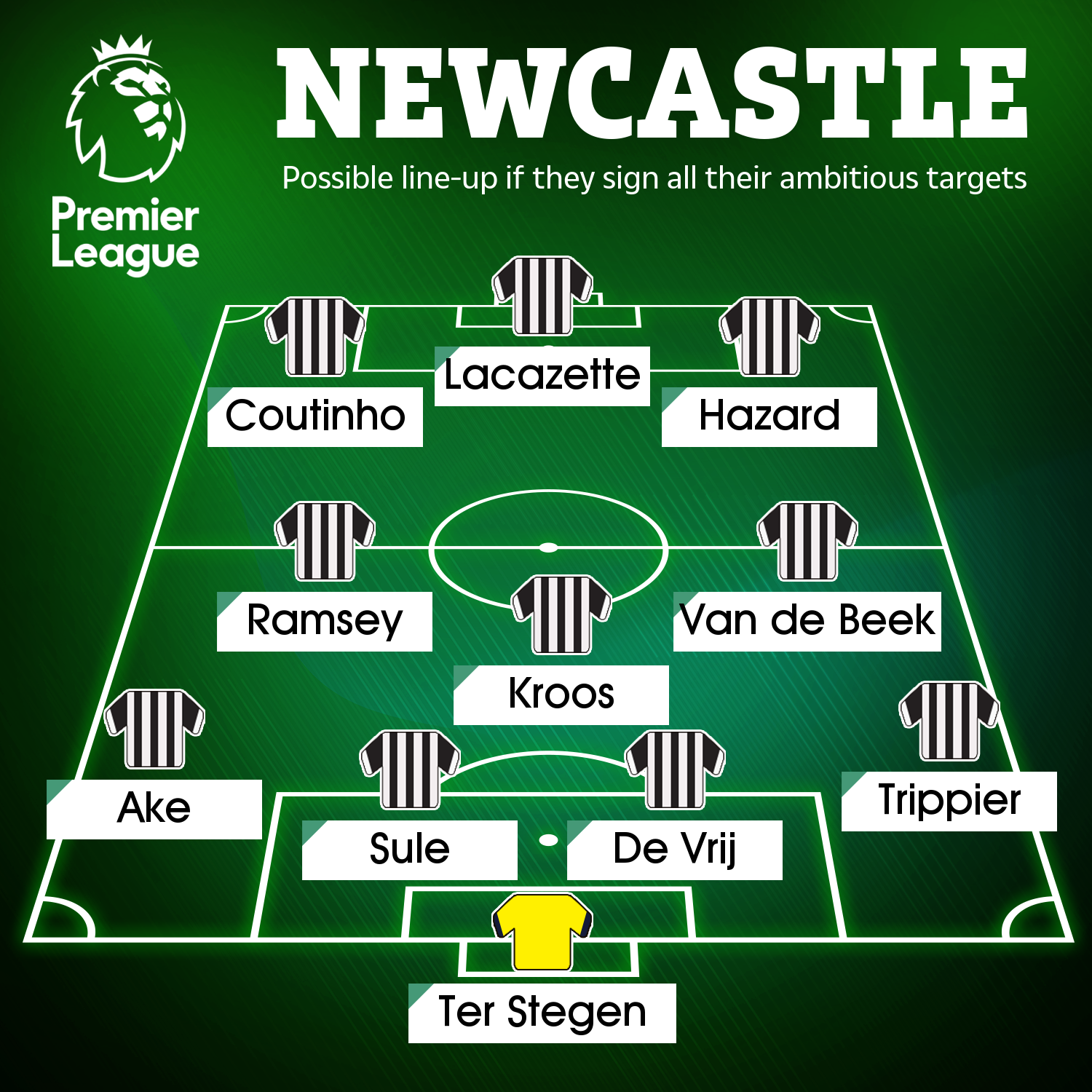 But the Toon could incredibly ply their trade in the Championship next term as they sit 19th in the Premier League table after 11 games, with the Toon without a win.

Director Amanda Staveley has vowed that there will be heavy investment with Newcastle poised to be active in the winter transfer window.

Staveley told The Chronicle: "We're going to invest, heavily, obviously. But we have to do it within the confines of the rules of the Premier League.

"We'll need to stick to the rules of the Financial Fair Play rules. We will invest as much as we can I think everybody knows that.

"But we won't just invest in footballers, budgets, transfers – it'll be across the board, everything. We want to make sure we invest at all levels.

"We have to look at the numbers and there are rules and regulations as we talked about, we have to make sure the revenue is coming in, the Premier League has rules on how we invest."

Due to their financial muscle, Newcastle have been linked with some of the world's biggest names as they plan to assemble a squad capable of challenging for trophies.

Here SunSport takes a look at how they could line-up at St James' Park if they were to land all of their ambitious targets.

Barcelona goalkeeper Marc-Andre ter Stegen is reportedly Newcastle's No1 shot-stopper target, with a £47m offer claimed to be in the offing.

And the club are also said to be in talks to bring Atletico Madrid right-back Kieran Trippier back to England, while Manchester City ace Nathan Ake could be reunited with former Bournemouth gaffer Eddie Howe.

The Dutchman is said to be on Howe's shortlist, and should he make the move to Tyneside, he could slot in at left-back.

Real Madrid maestro Toni Kroos could feature in the middle of the park with it stated that Newcastle are planning an audacious swoop for the German World Cup winner.

Meanwhile Newcastle could secure the services of Juventus' Aaron Ramsey in the New Year with the Old Lady keen to get him off their wage bill.

Playing alongside the pair in midfield could be Manchester United flop Donny van de Beek, with the club set to revive their interest in him in January.

Slotting on on the left flank could be Barca forward Philippe Coutinho, who is believed to be a loan target in the upcoming window.

Kroos' Los Blancos team-mate Eden Hazard could be deployed on the opposite flank with Newcastle believed to be ready to hand him another chance to shine in England.

Leading the line could be Arsenal striker Alexandre Lacazette, who is in the final year of his contract at the Emirates.

It is understood that Newcastle are monitoring his situation in North London and see the Frenchman as a realistic signing.