‘I don’t get nervous’: Volkanovski ready for fight of his life

Rising UFC star Alex Volkanovski is bracing for a hostile reception as he seeks to knock out Brazilian Jose Aldo on his home turf on Sunday.

The former rugby league prop from Gerringong on the NSW south coast shot to prominence in December after taking out gun American Chad Mendes, who retired after the fight. 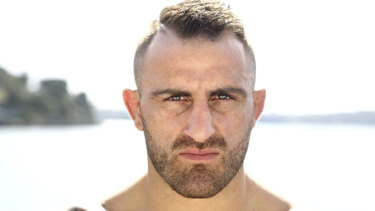 Focused: Alex Volkanovski is ready for the fight of his life in Brazil.Credit:James Alcock

In the lead-up to this fight, Volkanovski spent time at a training camp in New Zealand to get his body right.

While he’s feeling physically fit, nothing will prepare him for the hostile, parochial crowd he’ll face at UFC 237 in Rio de Janeiro – not that he's worrying about it.

“I don't get nervous. I just play what's in front of me, I've always been really good at that sort of stuff, just going with the flow.”

While Volkanovski is a slight underdog heading into the fight, he's relishing the prospect of fighting without the pressure of being the favourite.

“It's completely fine. I was underdog last time [against Mendes], it doesn't mean nothing. It just means that people who are betting on me are making more money.

“It takes a bit of pressure off me as well. I'm going to do what a lot of people aren't expecting. They'll be shocked when I prove them wrong.” 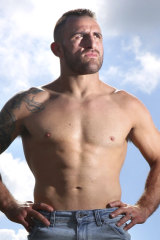 Alex Volkanovski is ready for whatever Jose Aldo throws at him. Credit:James Alcock

It’s been a meteoric rise for Volkanovski, who three years ago was working full-time fighting on the side, and he’s keeping his strategy simple.

“I'm a powerful puncher. I'm going out there to break him, that's my goal.

“He's going to be dangerous, I'll have to be cautious early.

“But don't be surprised if it's a quick one. I'm not expecting to go out there and knock him out early but it can definitely happen.”

Bullish about his chances, Volkanovski insists he doesn’t have any fear about facing a legend in the sport.

“I never get scared of fighting. Getting punched in the face – I don't care. You don't feel it at all.”

"I refuse to lose. I've trained very hard for 12 weeks to make sure I don't lose.

Looking ahead, the 30-year-old is targeting a possible title fight with Max Holloway.

"He's a great opponent, but he's potentially beatable and I've got the perfect style for him.

"I've obviously got a job to do this weekend, but don't be surprised if I take out two legends within a year."