MARTIN SAMUEL: It’s crazy that fans have been denied the chance to pay their respects to the Queen in an appropriate way, at an appropriate time… but the Premier League was left with no choice but to cancel thanks to the cowards in Government

The announcement came at 6.30pm. And at 8pm, here’s what we did. We went to a football match.

It wasn’t disrespectful. It wasn’t uncaring. Nor did it encroach on the passing of a beloved monarch.

Had the game between West Ham and FCSB of Bucharest been called off, it would not have made the pain easier, for those feeling pain. Had the fans been sent home it would not have placed the death of Queen Elizabeth II in a more fitting or proper perspective. 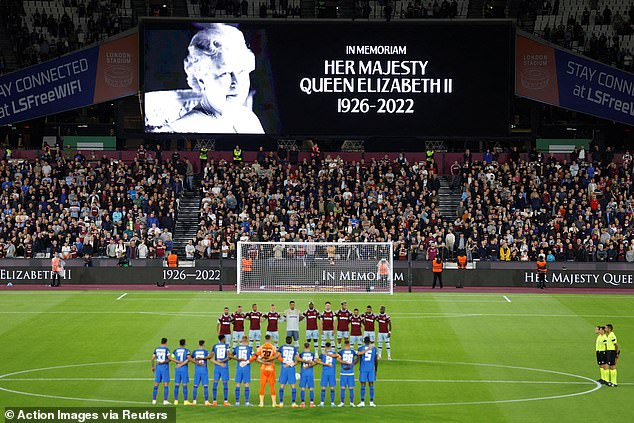 Cancelling West Ham’s game would not have made the pain easier, for those feeling pain

Not everything is football’s business, as much as the game would like it to be so. So life continued, within the proper parameters, at a sad time for the nation.

There was a minute of silence. The mood before the game, at half-time and after, was sombre and reverential. And that was entirely appropriate. As was playing. It struck the right balance. Don’t stop the clocks.

Today, as I’m writing this, I’m on my way to Bath to see a show, Into The Woods, at the Theatre Royal. We’ve been looking forward to it for months. We checked whether it would still be on and there were no plans for cancellation. We are expecting the national anthem, the dimming of lights and a minute of silent contemplation. Then the show, as is the saying, must go on. 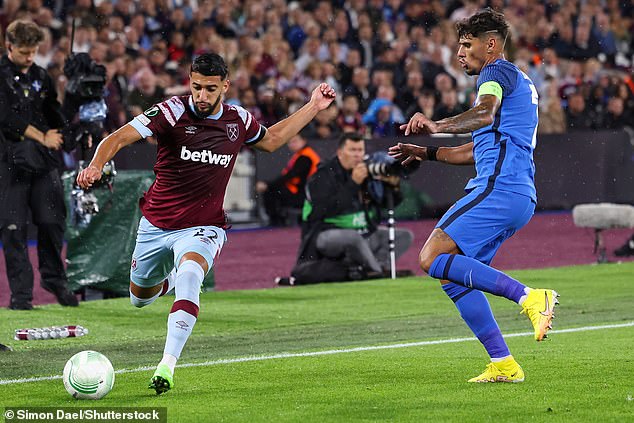 Not everything is football’s business, as much as the game would like it to be so

Football is different. Football went to the Government for guidance and got none. It was left up to them, after the cowards at the Department of Digital, Culture, Media and Sport briefed a preference that the weekend programme should not go ahead. They stopped short of ordering it, though, in case the decision was unpopular. That’s leadership for you, champions of Government regulation for football should note.

So it was left to the sport, to all sports, not that football’s overlords had an option. Placed in an untenable position, rather than appear disrespectful, what choice did they have but to cancel? In this way, thousands of fans were denied the chance to pay their respects in an appropriate way, at an appropriate time.

That is what happened at West Ham. No observation that involves 50,000 people is ever wholly perfect, but the club and those in the ground did all they could. No one with a smidgeon of feeling for humanity, or sport, or the institution of the monarchy, could have taken offence. 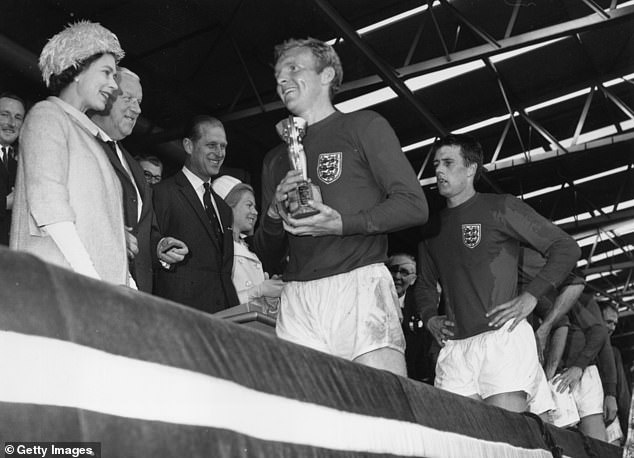 West Ham is a patriotic club. Proud of its role in the 1966 World Cup victory, proud to have produced England’s World Cup-winning captain Bobby Moore. With more time, a more detailed tribute could have been organised. With less than 90 minutes between the announcement and kick-off, however, the club responded magnificently.

This was UEFA’s fixture, do not forget. So aspects were left to UEFA officials to organise as best they could. That was where the only confusion arose. It was announced there would be a minute’s silence. The image of the Queen was projected on to giant screens behind each goal. The players gathered respectfully around the centre circle. The crowd began applauding. Maybe that drowned out referee Benoit Bastien’s whistle, perhaps he didn’t know to blow.

In lieu of a formal silence, then, a rather disorganised but football-appropriate tribute began. Some stood head bowed, the older generation mainly, some clapped as if she was a much-loved but now departed centre-forward — which metaphorically she was — others began singing the national anthem. 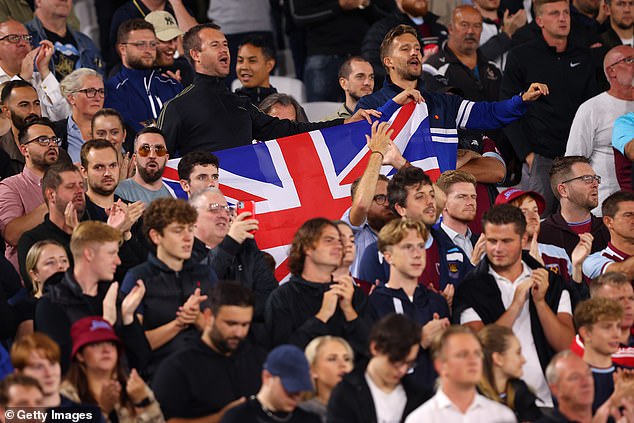 You can look at it two ways, as an utter shambles, or as a rather endearing snapshot of modern Britain, expressing emotion in ways only it understands. And when Bastien blew his whistle to signal the conclusion — and everyone heard that — a mighty roar filled the night air, because the football was about to start.

Nothing wrong with that. In fact, the spontaneous outbursts of God Save The Queen sung at various points during the game constitute the most meaningful public tributes to Her Majesty thus far. All the more so because they came, not from politicians, or heads of state, but from working-class people sharing common humanity and emotion. That is what has been denied with these postponements, an opportunity to come together and share.

At half-time, instead of the usual rabble-rousing noise and chat, there was the sound of a gentle orchestra, played at low volume, and the score in black surround on large screens. This gave way to a monochrome picture of two local heroes — Queen Elizabeth II and Bobby Moore, being handed the World Cup from Wembley’s Royal Box. He famously wiped his hands of dirt and sweat in preparation. Cheers and applause echoed again and another chorus of our, now old, national anthem. 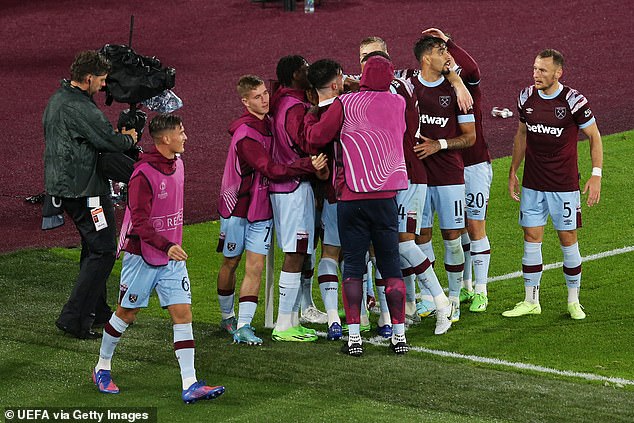 West Ham beat FSCB but unlike usual, there were no great celebrations after the final whistle

Many clubs and towns could find a similar connection. She was our longest-reigning monarch. She travelled widely and frequently and made a lot of meaningful associations. It would not have been hard to stage-manage a respectful celebration this weekend, to balance the past with the present. West Ham did it at an hour’s notice.

And they won, too, a fine 3-1 comeback, which would normally be a happy affair. Yet when the final whistle blew there were no bubbles, no great celebrations. Her Majesty looked regally down on the emptying pitch and televisions in the public area returned to BBC News.