Australian Olympic Committee chief executive Matt Carroll will issue a fresh pitch to federal ministers for an additional $60 million a year for Olympic sports, admitting “we’re getting to the sharp end” of the bid to salvage a funding crisis ahead of the federal budget in May.

Sports have been given an indicative range for their funding beyond Tokyo by the Australian Institute of Sports and the outlook is not bright for some including women’s hockey, which faces losing more than 60 per cent of its funding if the Hockeyroos don’t reach the podium in Tokyo. 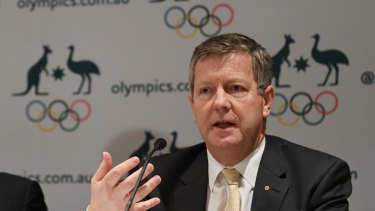 In a landscape where the budget surplus could evaporate because of the financial impact of bushfires and the coronavirus sport may not be high on the priority list but in upcoming meetings in Canberra Carroll will stress its critical role in addressing wider issues such as youth obesity.

“I’m not asking for a handout. My view is these are the things that sport can do for the community in what I would call a small amount of the federal budget. We’re getting to the sharp end … it’s not a heck of a lot of money. If I was asking for hundreds of millions I’d understand why they’d object," he said.

“We’re about to launch next week our bushfire initiative. We’re setting up a fund for replacement of sporting equipment destroyed in the fires and putting our Olympians into those communities just to help with community spirit. So sport can give back for a small investment. There are a lot of things for the government to invest in but the health of the country, I would have thought that’s high up the list.

“Sports are still out there raising dollars through sponsorship and through registration fees and those sorts of things. They’re not looking for handouts to run the whole business.

“But even just take a simple thing such as the Australian dollar. If it goes down it makes it more expensive to compete on the world stage. Someone like the Hockeyroos or the Kookaburras, they’ve got to get overseas to compete. It’s not cheap, nor simple, if we want to be successful on the world stage.”

Carroll is also arguing for the government’s allocation to be over a four-year period not one and to be primarily spent on direct grants to the various sporting organisations rather than AIS programs.

“The AIS has a board and I met with them last year and expressed with them that view and we’ll continue to do that,” he said. “This is something I’ve expressed to the [Australian Sports] Commission, that when you’re short on money … my view, which perhaps they don’t like, is that the grants should come first and maybe wind back a bit on programs," he said.

“The rest of the world isn’t sitting back … they’re also investing in their sporting world. We will struggle down the track [without more funding]. If we want to host a home Games down the track, in 2032, which we do, we need to be in a position to be building towards that and that starts now. It doesn’t start five years out because we’re talking about the eight-year-olds of today being the Olympians in 2032.”