Home » Sport » Knicks' Julius Randle restrained by teammates, taken off the court after controversial call in loss to Nets 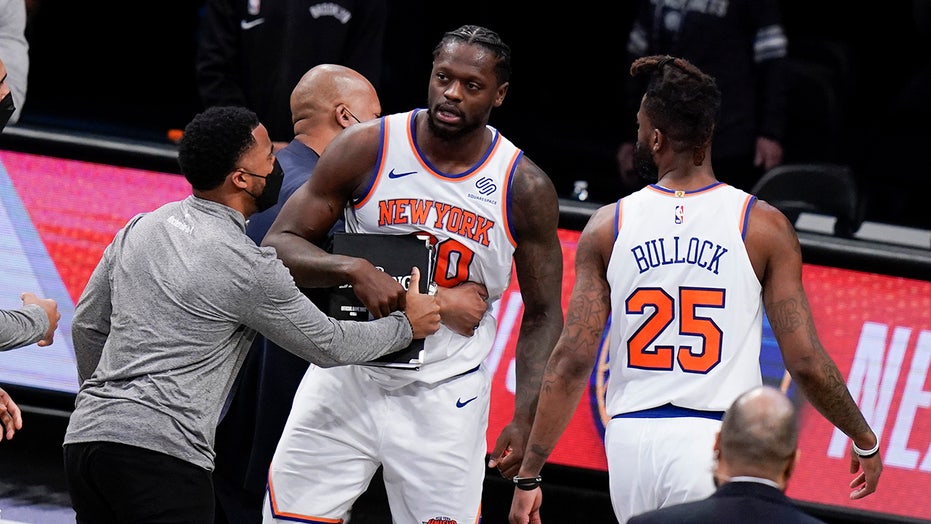 NBA All-Star Julius Randle had to be restrained by his teammates Monday night after a controversial call in the final minutes of the Knicks-Nets game gave way to Brooklyn’s fifth straight win.

The Knicks fought hard to get within reach of the Nets after trailing by 18 points in the first half. At 115-112 and with just seconds left, Randle went up for a 3-point attempt when Nets defender Kyrie Irving appeared to get a hand on the ball.

PATRICK EWING FURIOUS AFTER GETTING STOPPED BY MSG SECURITY: ‘IS MY NUMBER IN THE RAFTERS OR WHAT?’

The 26-year-old forward didn’t take the shot and dribble the ball before taking another but referee Scott Foster called a traveling violation.

Randle pleaded his case to no avail but he wasn’t finished. After the buzzer, he went to approach Foster again but had to be restrained by several teammates before eventually being ushered back to the locker rooms by Knicks senior vice president William Wesley.

When asked about the call after the game, Randle said he was ready to just move on.

“It was a conversation — it’s best I don’t comment on the situation,’’ he said. “There was a lot of frustration behind it for both sides. I’ll let it be in the past and move onto the next game.’’ 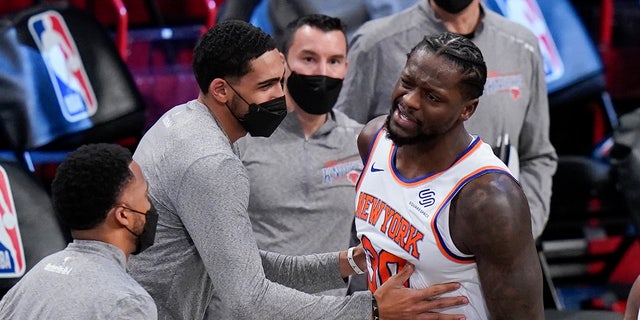 Foster’s explanation after the game was that Randle landed with possession.

“The defender was deemed to touch the ball, but not cause it to be dislodged or loose,” he explained, via the New York Post. “Upon that when the player alights he cannot purposely drop the ball or dribble the ball or be first to touch after he dropped the ball.”

Knicks head coach Tom Thibodeau disagreed with the call but was unable to challenge with none left.

With the win, Brooklyn is on a five-game winning streak.