The Manchester City star has never known a time when players, staff and fans have been so together and wants the home crowd to dig even deeper to drive the Three Lions to Euro 2020 glory. 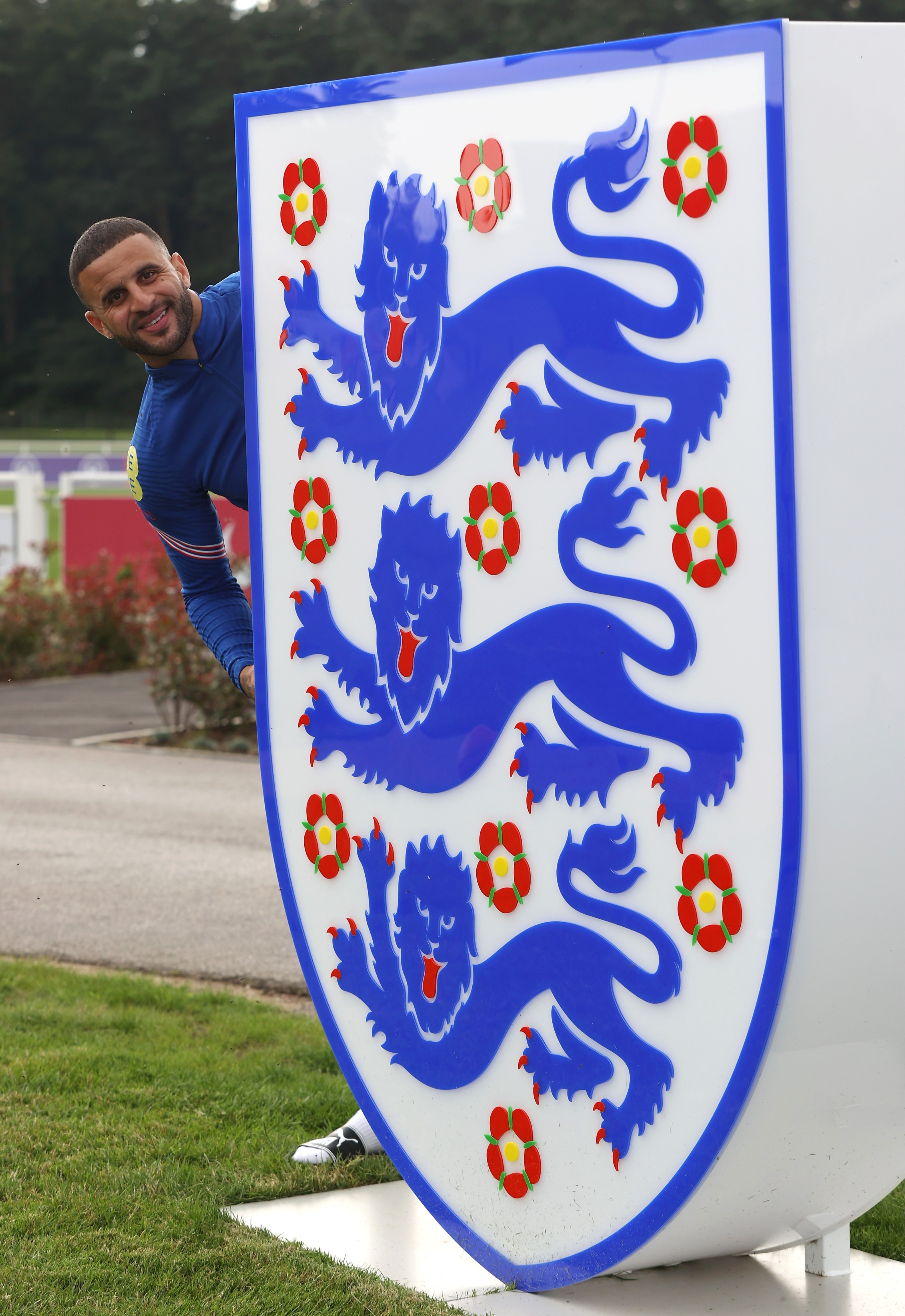 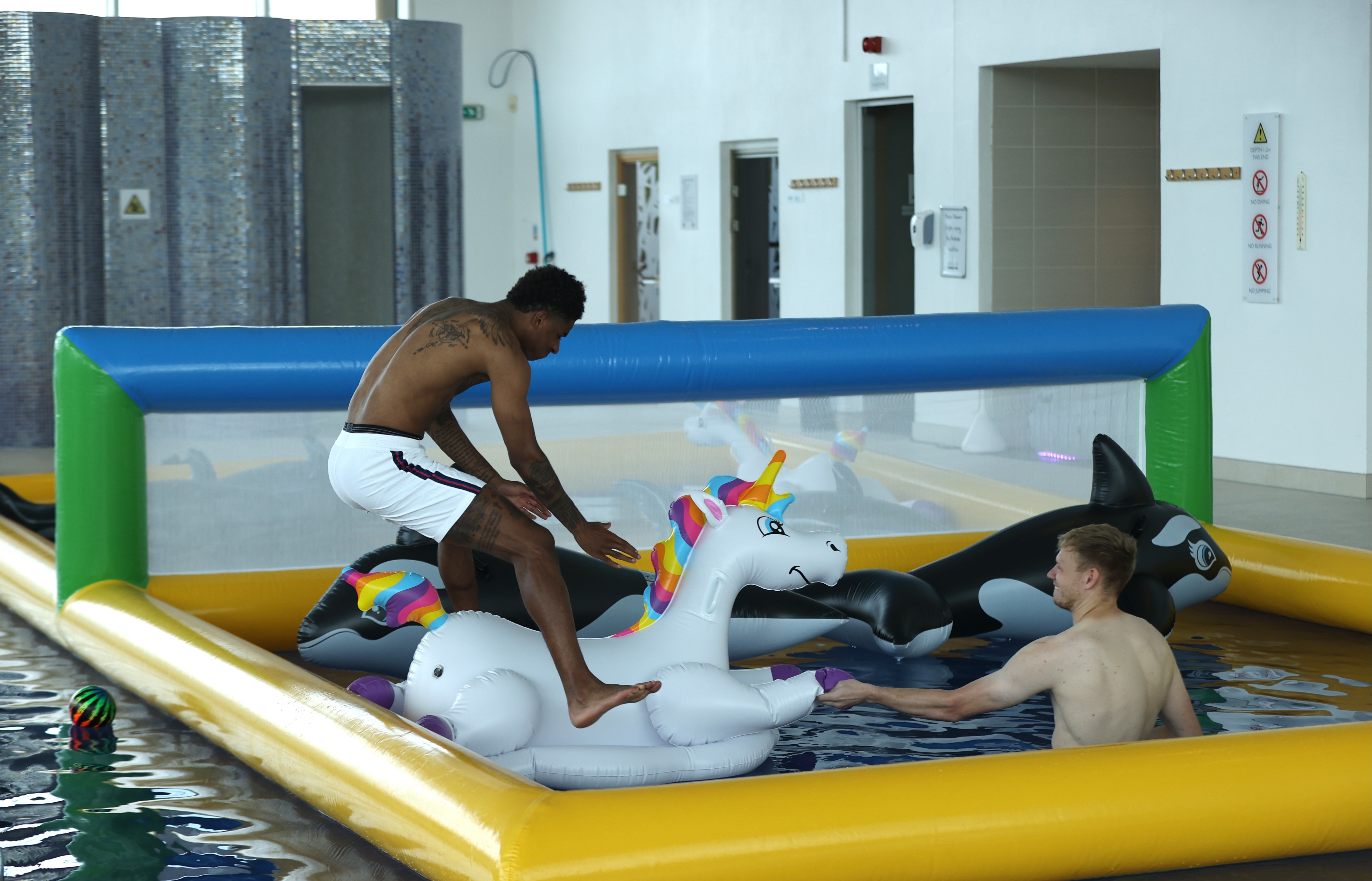 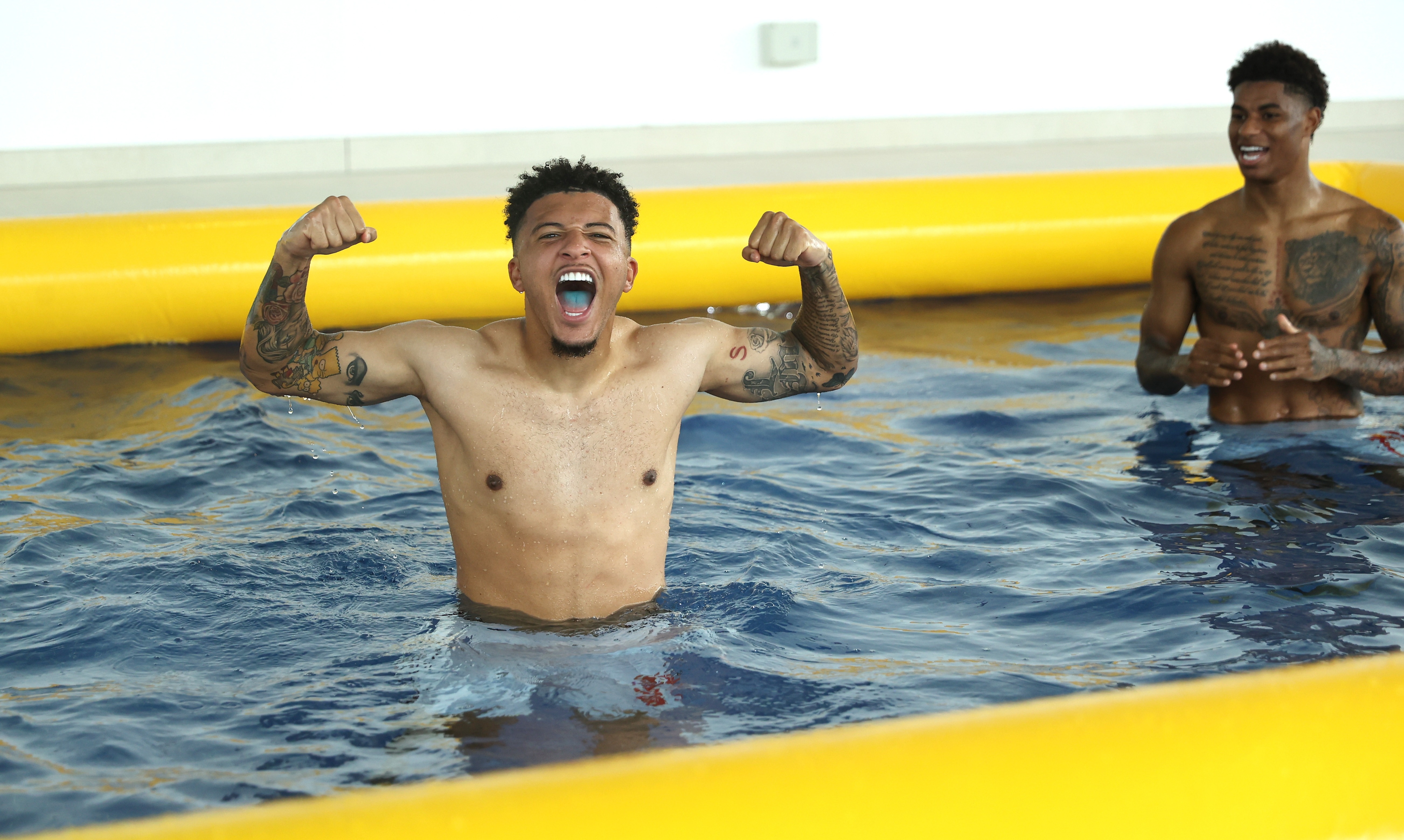 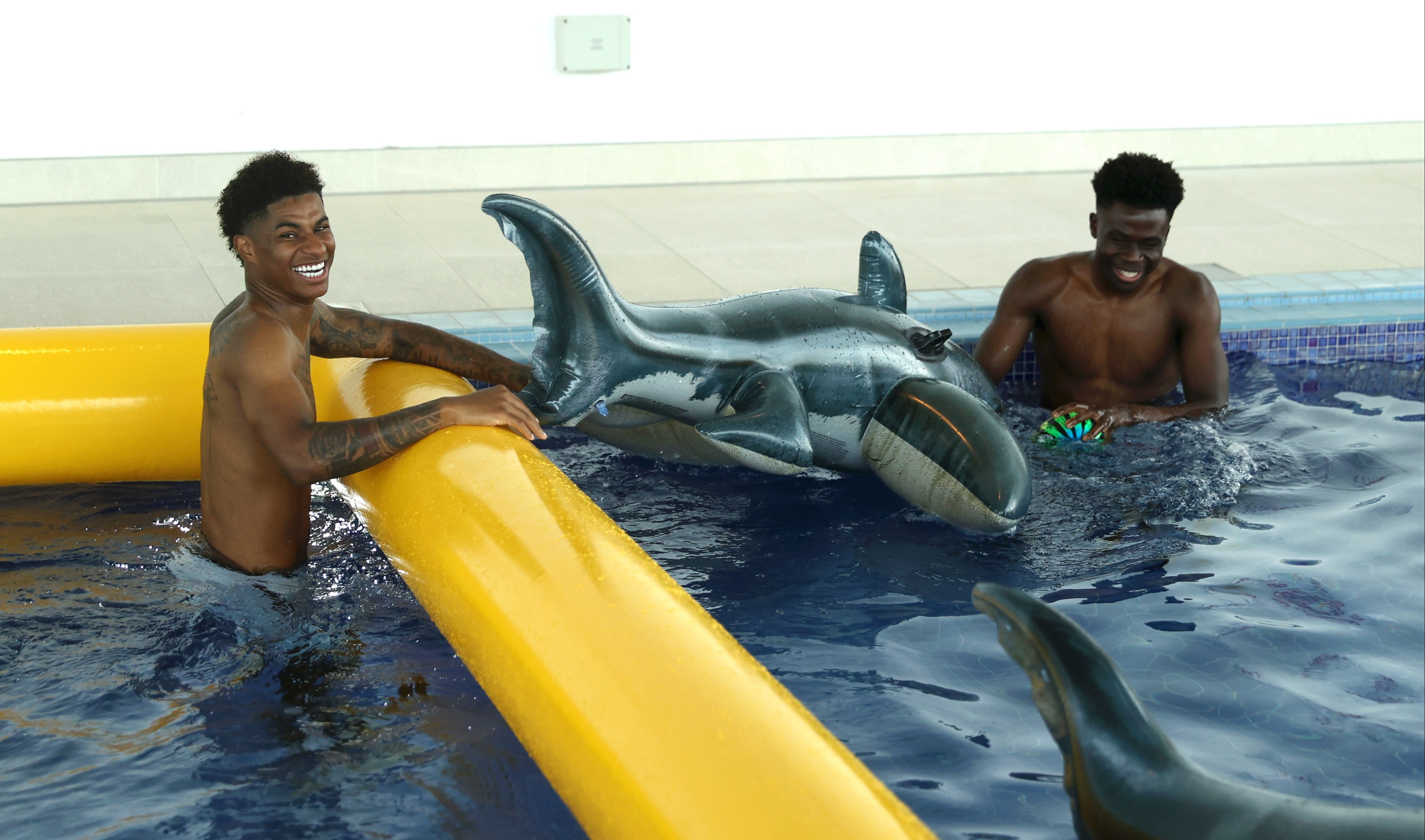 “I think the semi final and Germany is the best I’ve witnessed in an England shirt at Wembley.

“The atmosphere, the buzz, the togetherness – not just from the 11 men on the field, but the bench and the crowd.

“I feel like we are one now.These emotions and these types of games, they grab hold of you.

“I can assure you that you have to give us one more. We need one more from you.

“Because that 12th man is vital. We need to hear you.

“And I put my bottom dollar on it that you will be singing your hearts out for us.”

In forgettable scenes after Wednesday’s historic win over Denmark, England players, backroom staff and supporters were united in the most raucous rendition yet of Neil Diamond’s Sweet Caroline.

I MISSED THE GLEE SPOT 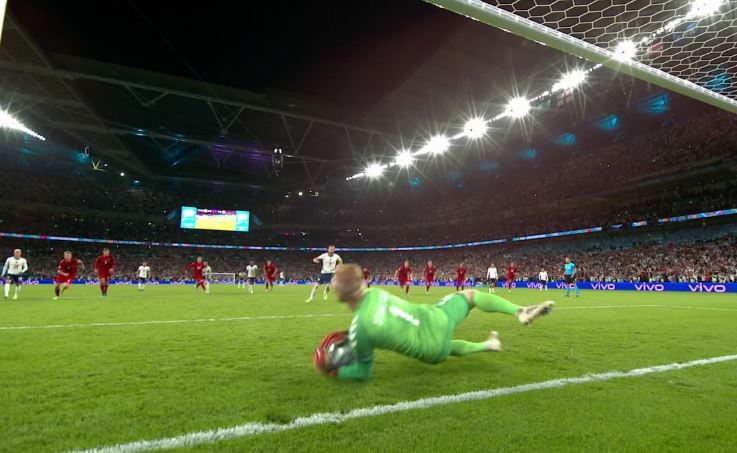 AS Kyle Walker prepared to follow up Harry Kane’s penalty, he could already see the headlines.

But the Manchester City defender fluffed his chance of glory, as he confessed to match-winning captain Kane after the game.

Walker said: “I said to H in the shower. ‘Skip, I don’t ever think you’re going to miss….’

“I’m never normally there. I’m normally on the halfline line, if they kick it up the pitch I’ve got to run after it.

“But for some reason I thought, ‘I have to be there’.

“I thought, if I can get there for the rebound, it’s ‘Kyle Walker gets the rebound to get England into the final’ – no-one could say anything to me again!”

As Kane steadied himself for the crucial extra-time spotkick, Walker crouched on the edge of the Denmark penalty area like a sprinter in the starting blocks.

But the City star revealed: “I was ready, but then I froze.

“He’s run and took it, but I’m too busy looking up to see where the ball’s going, all the Denmark defenders are in front of me, so I’m glad he’s got the rebound.

“I saw the headlines, but it didn’t happen!”

But Walker believes the Wembley crowd can find another level and turn the volume up to 11 in support of Gareth Southgate’s team at Sunday’s final against Italy.

The City star told Lions’ Den connected by EE, said: “It’s got to, for a final!

“Win, lose, whatever the result will be, it’s been a fantastic tournament. But we’ve got one job to do.

“We’ve not come here to participate in the final. I don’t want to be collecting a silver medal.

“No-one remembers second – it’s first or last that you remember.

“I want to be remembered for lifting the European Championship at Wembley in front of the home nation.”

FAMILY PRIDE DRIVES ME ON

WALKER has had low moments, even during England’s euphoric, historic run to their first European Championship final.

But every time it’s got too much, one phone call to friends or family has reminded him what and who he and the rest of the team are playing for.

He said: “It’s five weeks away from home.

“It is hard. I’ve had a couple of down days here.

“But as soon as you hear the words, ‘You’re making us so proud,’ that just says, ‘You keep pushing’.

“Because you’re not just doing it for the individuals here and the people in the hotel now.

“You’re doing it for the people at home. For the people you used to go to playgrounds with, or youth clubs with, everyone’s got a little slice in you that got you to where you want to get to. 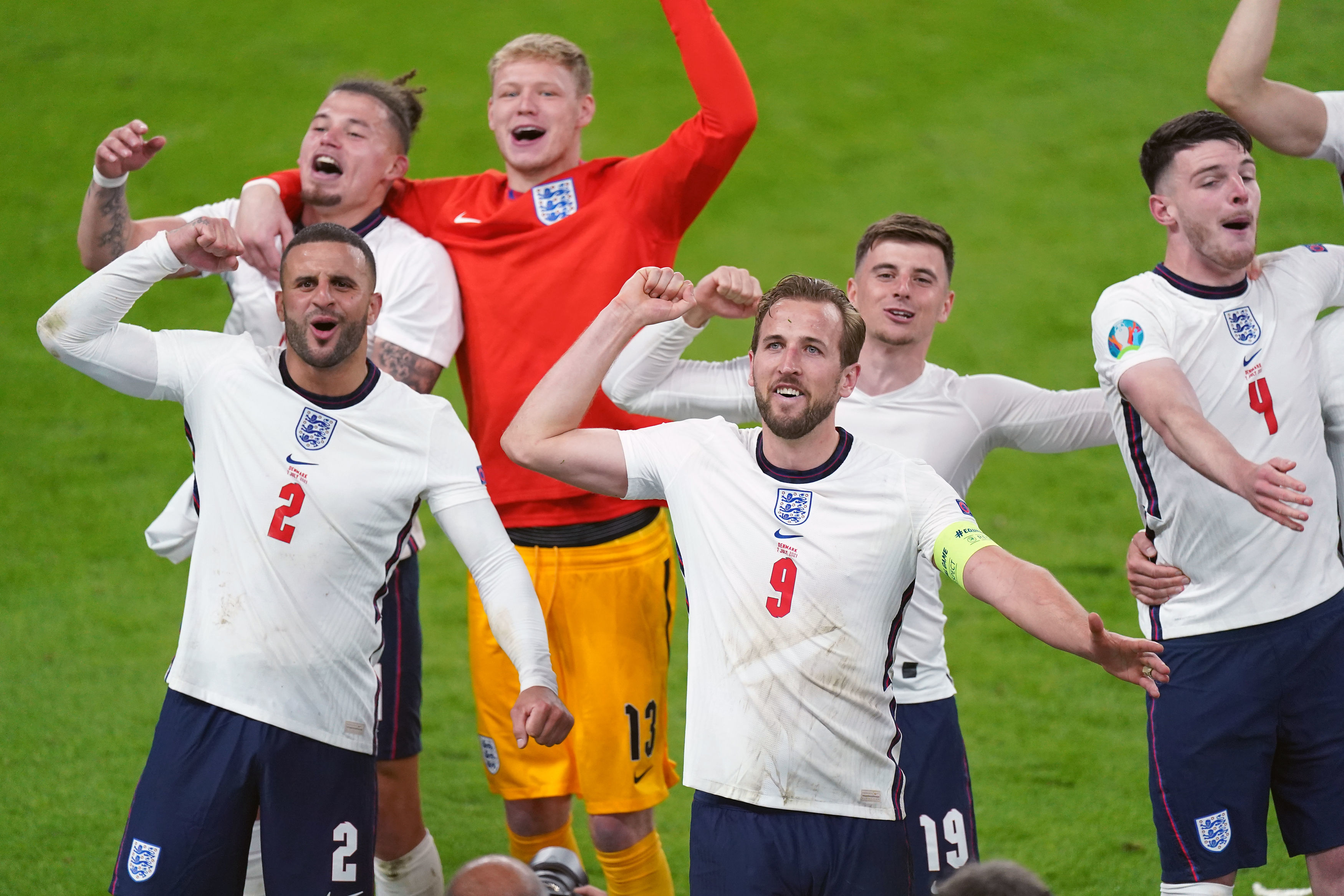 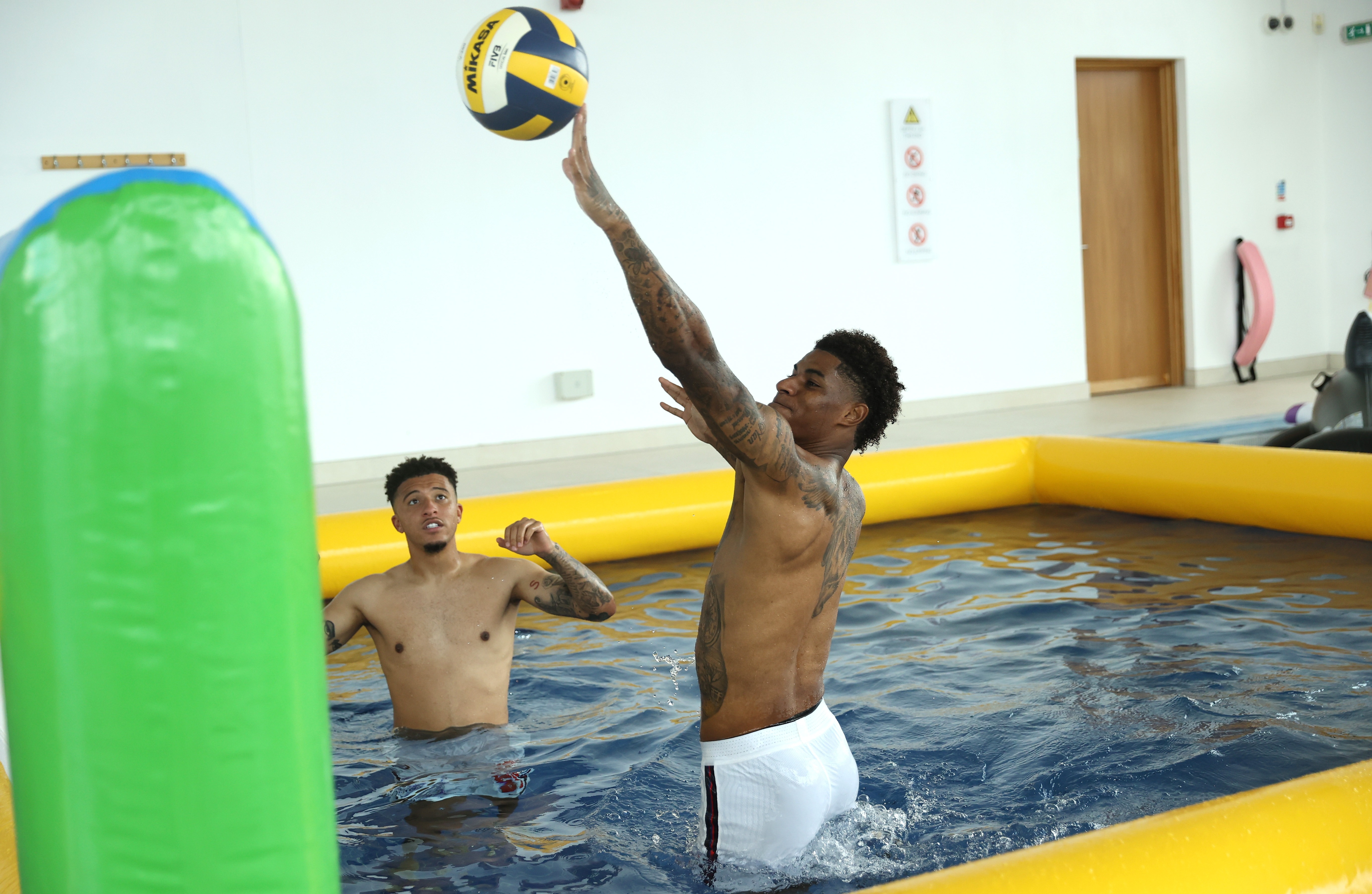 “We owe it to the fans and everyone who has been on the journey with us.”

While appearing on the Lions’ Den connected by EE show, Walker was shown clips of England fans celebrating the goals and semi-final victory against Denmark on Wednesday.

The City defender said: “The reactions on their faces, the celebrations – even there, you see the togetherness.

“It’s a nation. We’re as one now. I just hope it continues

“As much as I’m so enjoying this, I miss home, I miss my family.

“But if I can keep having the feeling I’ve got now and the emotion I’ve got now, I’d stay here another five weeks.”

Hopefully we’ve set the bar for the future youngsters that are coming through, that this is what our country wants and expects of us.

What a five weeks it has been. What a contrast to the last European Championship, five years ago, where humiliation by Iceland led to the sacking of Roy Hodgson and, ultimately, the appointment of Southgate.

Walker said: “Still to this day it haunts me.

“It’s the lowest moment of my career by far.

“We can manage the game better.”

England fans have gone on a similar journey, only quicker. Some supporters booed the team off after the group stage bore draw against Scotland. 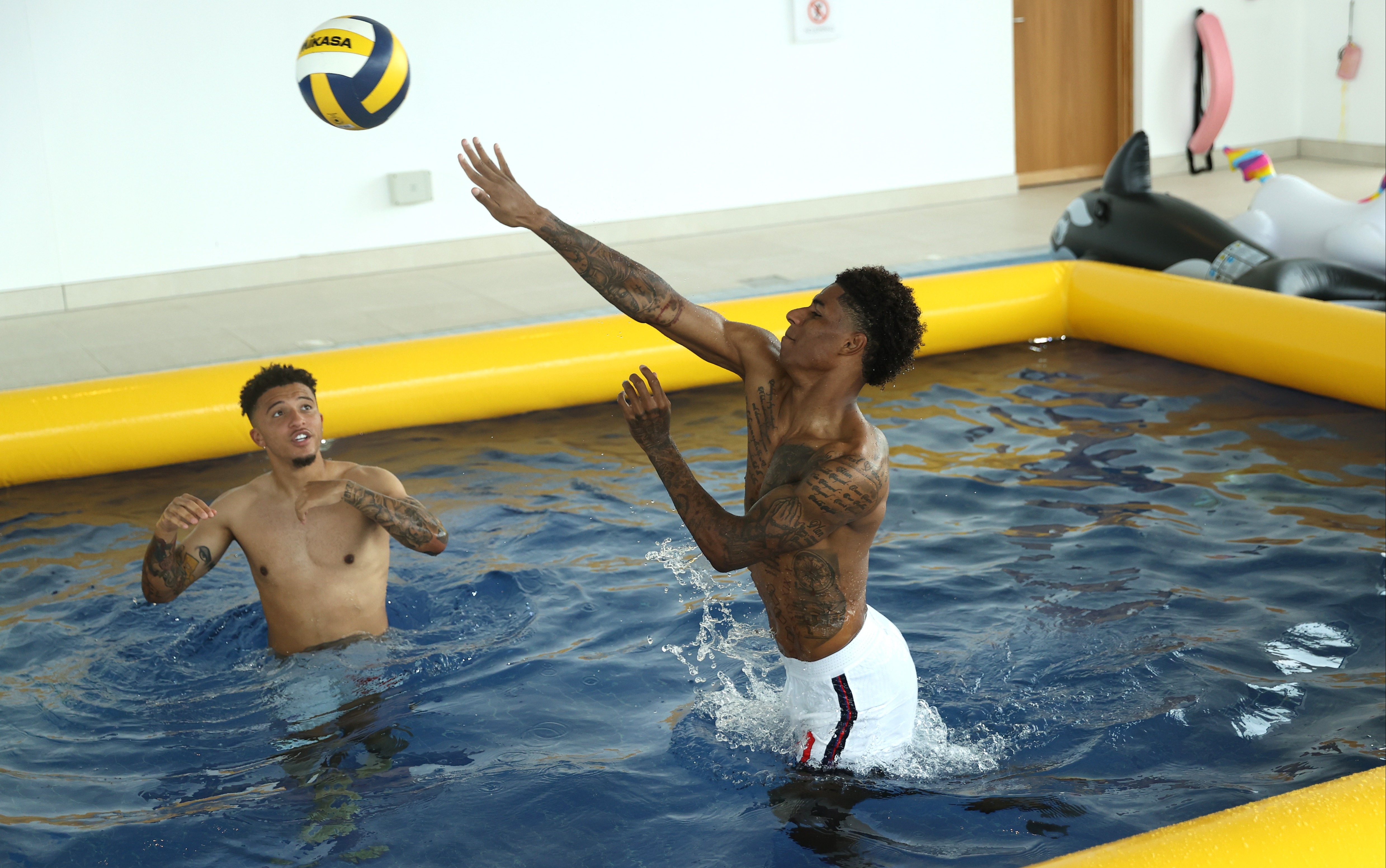 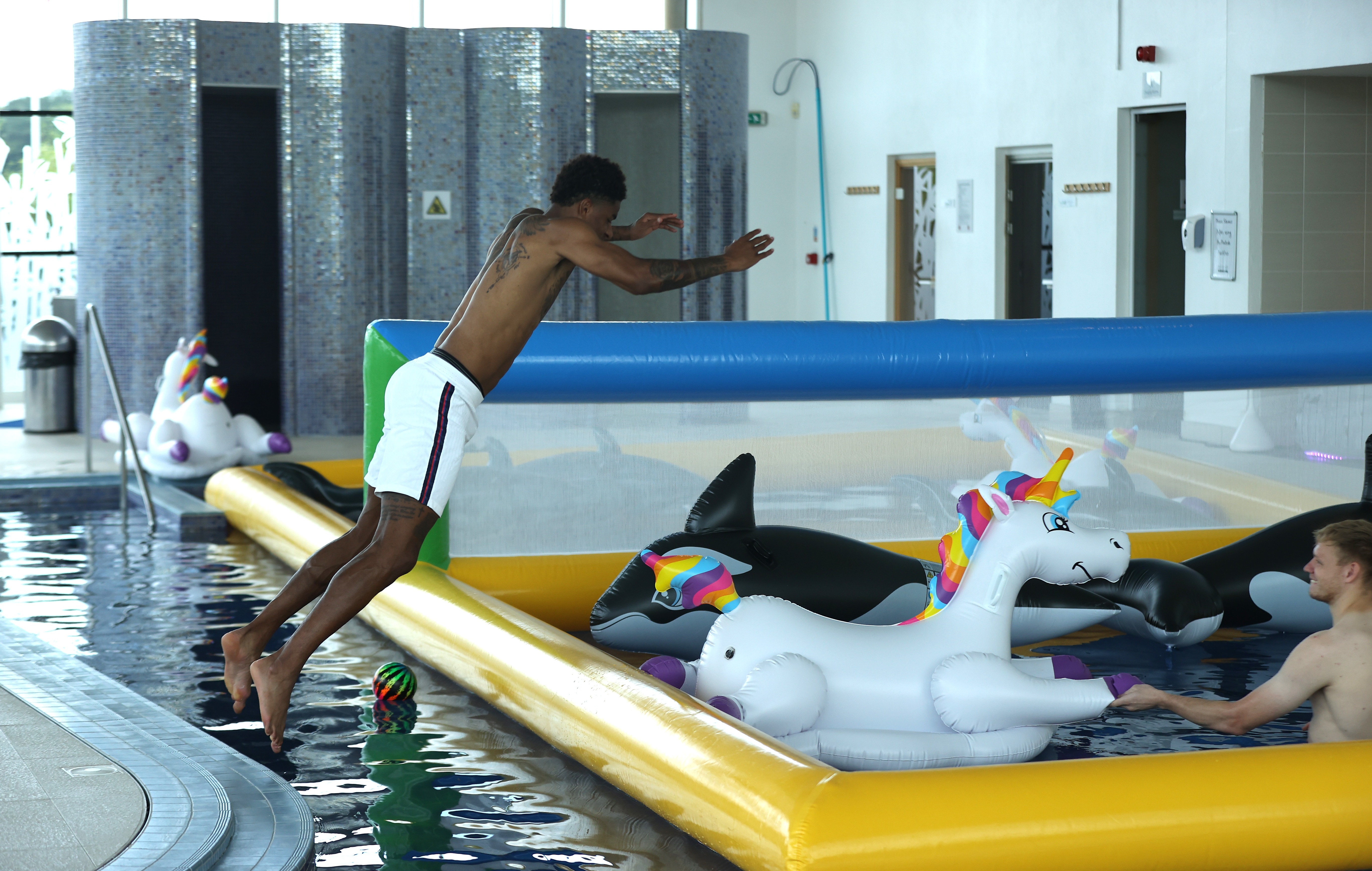 On Wednesday, cheers rang around Wembley as Southgate’s men ran down the clock by keeping possession.

“That’s about game management, That’s about us stepping up from boys to men and saying: ‘You know what?  We’re 2-1 up, they’ve got 10 men, what are we going at them for?

“‘Let’s keep the ball and make sure we don’t do anything stupid, save your legs a bit for the final.’”

But Walker is not one to save his legs. Ever.

At the end of extra time on Wednesday, he made one more trademark, lung-busting sprint.

He said: “On big occasions like that you can’t tell me you’re tired. You work your whole life to get there.

“I might not be technically gifted but I guarantee you, I’m 31, I will still run more than anyone in there. It’s a fact.”

The success of Southgate’s England has been built on everyone – players, back-up players, staff – giving everything to the cause.

“This group of lads, with this manager and this coaching staff, we just keep knocking them down.

“Hopefully we’ve set the bar for the future youngsters that are coming through, that this is what our country wants and expects of us.”

For so long, England’s wants and expectations went unfulfilled.

On Sunday,  Southgate’s team England can go where no Englishmen have gone before and be crowned European champions.

“A European Championship final for your country against Italy – why not?