No holding back! England boss Sarina Wiegman hits back at German counterpart’s barb that the pressure is on the Lionesses as they aim to make history in Sunday’s Euro 2022 final at Wembley

For just a moment, on Saturday night, the mask slipped and Sarina Wiegman displayed the mildest sense of irritation with her German opposite number’s claim that all ‘the pressure is on England.’

It was reminder that it is always slightly different when these two adversaries are facing up to each other.

‘Did she also say why?’ Wiegman asked, when Martina Voss-Tecklenburg’s claim was put to her. ‘We are not going to feel more pressure.’ England’s manager felt she’d already answered enough questions on the age-old issue of penalties in this fixture, too.

‘You’ve asked me before. We have practised penalties and are prepared for everything. We are not going to do differently things all of a sudden.’

But a match this evening before 90,000 fans and a likely 14 million domestic TV audience, is different, however religiously the English ‘process’ stays the same.

There’s also huge hype in Germany, where a clip of striker Alexandra Popp turning up at Friday’s press conference in fake moustache and cap worn backwards — her riposte to being compared with Robert Lewandowski — has gone viral.

But it falls to Wiegman, only ten months into the job, to bring it home to her adoptive nation for the first time since 1966. 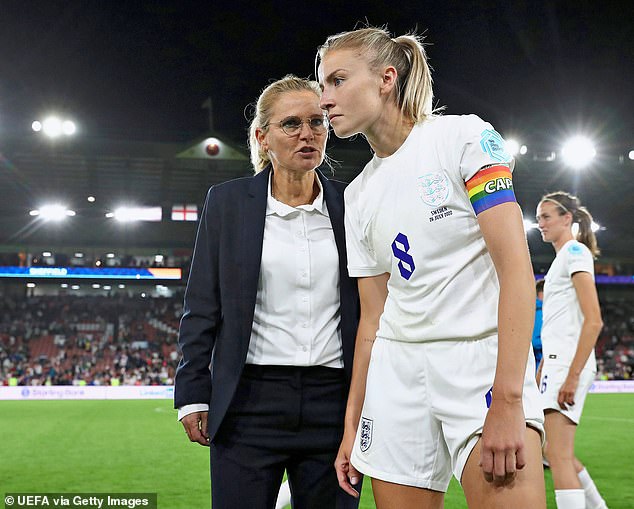 And then there’s the level of physicality to be expected against Germany — on a level that Wiegman’s players have not seen before in this tournament. Things got a little spicy against Spain in the quarter-final, with allegations of their captain being elbowed in the neck before England’s equaliser, but Germany have put a boot in more than any other side.

‘I think at some point it might be a little physical Germany can play very direct,’ said Wiegman, a theme which was picked up by her captain.

‘That’s the nature of any German team,’ Leah Williamson said. ‘They’re physical, but I think our game is so strong, the way we play to combat that. It will be a good game, two different approaches potentially, but we have fight in us, it just comes out in us a little differently. It’s something to be aware of, but not something we can’t match.’

In other words, neither side will be taking prisoners. The Germans have committed 60 fouls in five games, the most by any team in the tournament and 20 more than England, and have also accumulated eight yellow cards. 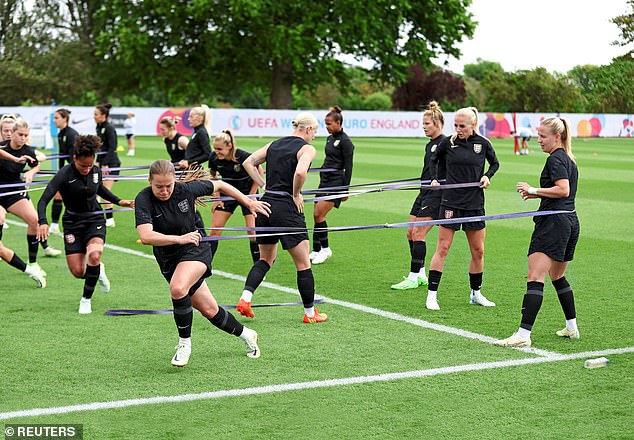 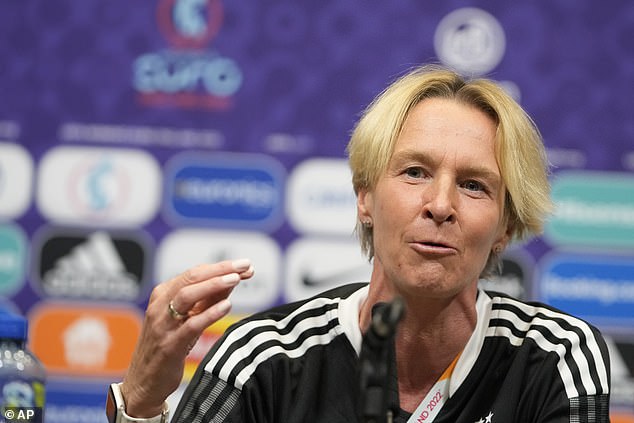 Wiegman also found herself lumbered with the failings of the men in her last public pre-match discussion. Not only the shadow of 1996, when hosts England lost in a Wembley semi-final penalty shoot-out, but last summer’s defeat by the same method for Gareth Southgate’s men against Italy.

With quite enough expectation to contend with, this England manager batted that one away, when asked if she could make up for this. ‘I don’t think we should compare men and women. It’s one England,’ she responded to the idea of her side going one better. ‘Everyone there should cheer for the England team. I don’t think that’s going to be any different.’

The Germans were the ones looking more relaxed in front of the cameras. Voss-Tecklenburg breezily brought up the subject of Geoff Hurst and all that when she did not need to. She had been asked whether she had memories of the ‘96 shoot-out when she said that she had been born in 1967 so only had videos to go on. ‘Everyone knows the history between Germany and England and Wembley and goals and penalties. But that’s all in the past,’ she said.

Her captain Svenja Huth photographed the packed Wembley press conference room, while Voss-Tecklenburg eulogised about this final being the one the nation had always wanted. ‘We’ve dreamt of this to have a final against England at Wembley,’ she said. 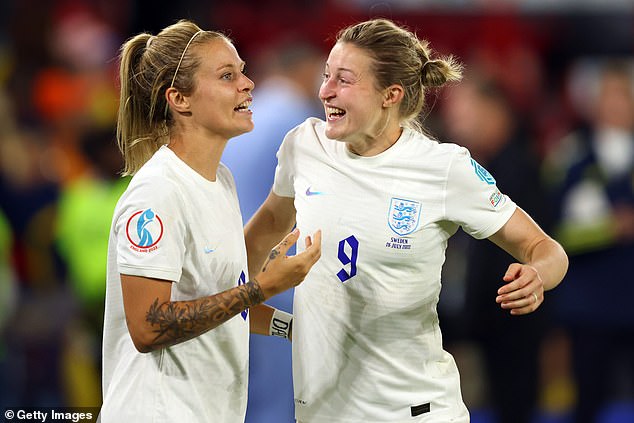 ‘I don’t think there are any bigger moment for our players. We really want to stay present and embrace everything. England v Germany electrifies football fans.’ Both sides feel the need for this tournament to very much be a game-changer for women in sport and society generally, long after the dust has settled on the final.

‘This hasn’t just been a change of moment football but society in general, how we’re looked upon,’ said Williamson, a schoolgirl when she watched the Great Britain team defeat Brazil in the London Olympics ten years ago today. That was another game-changer for our women’s game.

‘When we look back on the tournament, we will have started something. I’ve only been aware of the workplace in football but in the world women have more battles and hurdles to overcome.’

There’s plenty that Wiegman and her players will want to put out of mind. The fact that they have never won a tournament penalty shoot-out, for instance. They were first beaten on penalties in the final of the inaugural Euros in 1984 — by Tuesday’s semi-final opponents Sweden and were then knocked out by France by the same method in the quarter-finals of the 2011 Women’s World Cup. 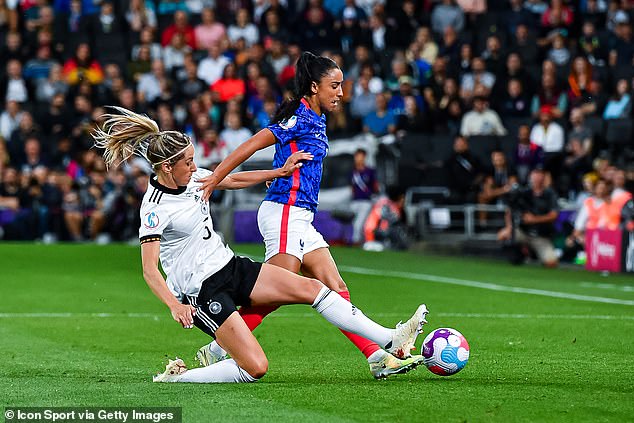 Southgate’s coaches had the England players deliberately shouting at each other while they practiced kicks, to replicate the game environment, last summer. Wiegman is not thought to have repeated this practice but there has been an increase in the frequency of spot-kick practice since May.

If anyone is capable of allowing England to leave the past against Germany firmly where it belongs, then it is the impeccably calm Wiegman, who led the Netherlands to victory in 2017 when the Dutch beat Denmark 4-2 in the final with Arsenal’s Vivianne Miedema scoring twice.

‘I think there is some rivalry with Germany, but whoever we would play against there would be some rivalry, because we want to win that final,’ she said. ‘Netherlands and Germany has some rivalry too.’

She is likely to select the same team for the final that she has throughout this competition, while Germany will probably line-up as they did in the semi-final against France. There is no chance that forward Klara Buhl will be available, even if she has recovered from Covid. A positive test saw her miss the semi-final. 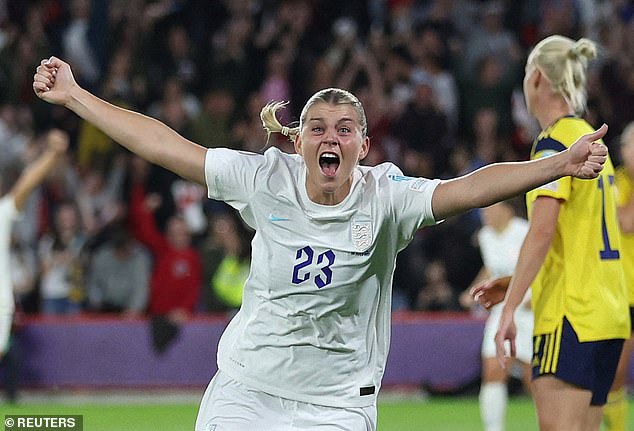 There is no doubt how much rests on the occasion for both these nations. The Football Association knows that lifting the trophy on home soil could be transformative for the women’s game that they have invested so much in. Their German counterparts feel precisely the same.

‘At the beginning of the game, Wembley will be English and it would be nice if it belonged to us at the end,’ said Voss-Tecklenburg.

To which Williamson’s response was very much to the point. ‘I would be surprised if she didn’t hope that,’ the 25-year-old said.

‘She’s going into the game with the same goal as us. Ninety minutes of football will tell all. That’s what we’re focused on and probably what they will be too.’