Olympic 400m freestyle champion Mack Horton must pin his hopes on being selected as a relay swimmer for next month's FINA World Championships in Korea after missing his final chance to qualify for an individual swim.

Horton completed a tough few days at Chandler when he was third in Tuesday night's 800m final, well behind runaway winner Jack McLoughlin, who dominated in his home pool to clock 7:46.79s and go well under the qualifying mark. 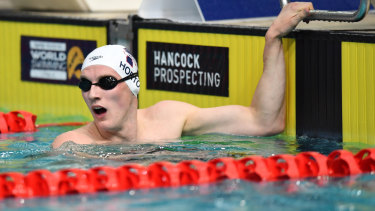 Horton has not spoken to the media this week but it's clear he's not himself. He could not sprint with McLoughlin in the 400m, finishing second but missing the qualifying time. And he never looked likely in the 800m, unable to stay in touch with the eventual winner and being overhauled by Parrish in the second 400m.

He was fifth in a red-hot 200m freestyle final and it could yet be his ticket to Korea. He can be selected as a relay option and if he does get the green light, can be entered in the 400m on the basis that while he missed the qualifying mark set by Swimming Australia, went under the FINA mark required to compete.

That meet is only five weeks away so it would take a quick bounce in form for Horton to find his brilliant best, which spurred him to gold in Rio when he went head-to-head with Chinese superstar Sun Yang. The decision now rests in the hands of head coach Jacco Verhaeren, who will ultimately decide Horton's fate over coming days.

While one big name was struggling, another was returning to vintage form, with Emma McKeon producing a powerful personal best to hold off Ariarne Titmus and win the women's 200m freestyle. 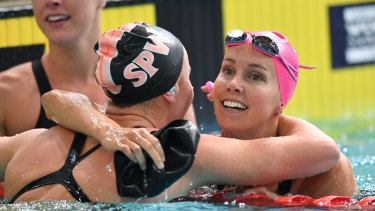 McKeon, who won silver at the 2017 World Championships and bronze in Rio, said she had lost confidence in the race after a shoulder injury but produced a bold, front-running swim to unleash a 1:54.55s, the second-fastest in the world this year.

Only Titmus has gone faster with her Australian record of 1:54.30s set in April but she was unable to haul in McKeon in the final 50m, finishing with a 1:55.09. That swim puts both in medal contention in July and sets up an excellent women's relay.

"I wasn't expecting a PB tonight and I haven't done one since Olympic trials in 2016. To do it here, I'm pretty happy. I'm definitely surprised," McKeon said.

"I lost a bit of confidence in it over the last couple of years. When I hurt my shoulder I wasn't getting as much freestyle done. I thought I'd lost being in the mix in the 200. Tonight that gives me confidence that I'm still in the mix."

In the other final of a short session, David Morgan won the men's 200m butterfly and did enough to go under the qualifying mark, ensuring he is on the plane to Korea and likely part of the men's medley relay.