Mike Tyson appeared slow, exhausted, and unbothered during an interview with Piers Morgan on British TV 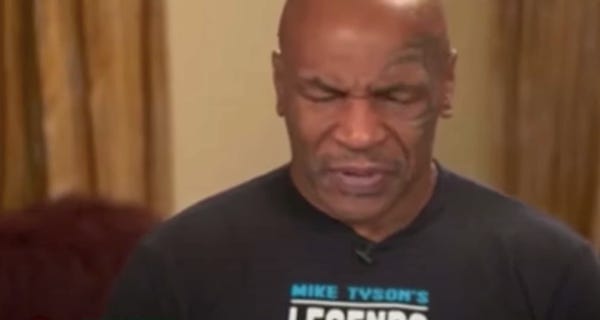 The former heavyweight world champion was asked about the Black Lives Matter movement and his relationship with US President Donald Trump, but said little during the chat show Tuesday.

The 54-year-old, who returns to the ring on November 28 for a boxing exhibition against fellow all-time great Roy Jones Jr., could be seen breathing heavily and, at one point, dipped his head and seemed to close his eyes for a few seconds.

When asked why he is boxing without headgear in an unofficial match, Tyson said: "I just want to do this, I plan on doing this for a charity exponent and I think I am capable of doing that, and that's what I want to do.

He added: "I think it's very wonderful that we are fighting together, it's a fight we should have had sooner, but unfortunately we are having it now, and that's going to be awesome."

Tyson's lackadaisical interview is a far cry from the photographs and video clips which he has posted on his social media channels, which show him hitting pads and a boxing bag with fast and powerful fists.

He posted footage about the need to be brave on Monday:

Tyson runs the 420-acre Tyson Ranch marijuana farm, has had acting roles in movies like "The Hangover," and has a popular podcast called "Hotboxin' with Mike Tyson."

During podcast episodes, Tyson speaks and acts much differently than he did on "Good Morning Britain."

He even has a reasonable rapport with the GMB host Morgan, as he appeared on the show last year and joked that he'd be too scared to fight him.

The Tyson and Jones exhibition will be broadcast on the Triller platform as a $49.99 pay-per-view. It will be held at the Dignity Sports Park in Carson, California.