The Brazil ace, 29, missed the 3-2 win through injury as Lionel Messi inspired a phenomenal comeback. 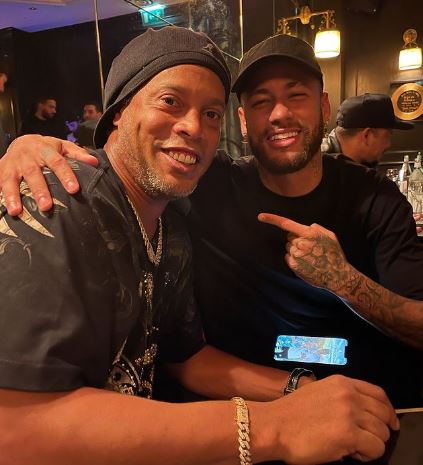 The ex-Barcelona star, 34, could have had a hat-trick too, only for Kylian Mbappe to take – and MISS – a last-gasp penalty.

Ronaldinho was the guest of honour at the Parc des Princes for the thrilling game.

The PSG icon, 41, was emotionally reunited with old Barca pal Messi before the game – sharing a heartwarming hug on the pitch.

But after the game, Ronaldinho hit the town with former national team-mate Neymar.

The pair played ten times together – all in Brazil friendlies.

On Tuesday night, both legends shared photos of their night out on Instagram, posing and smiling the night away.

Their night on the tiles in Paris set tongues wagging around the game too, with a host of big-name stars – past and present – commenting.

The likes of Deco, Memphis Depay, Casemiro, Michel Salgado and David Beckham all liked or commented the pictures.

Ronaldinho is world-famous for his love of partying.

Leroy revealed: "Ronaldinho didn't train any day of the week and would just turn up on a Friday for the game on Saturday.

"I think he was trying to follow in the steps of Romario, who would also go out every night, but he didn't have the same success." 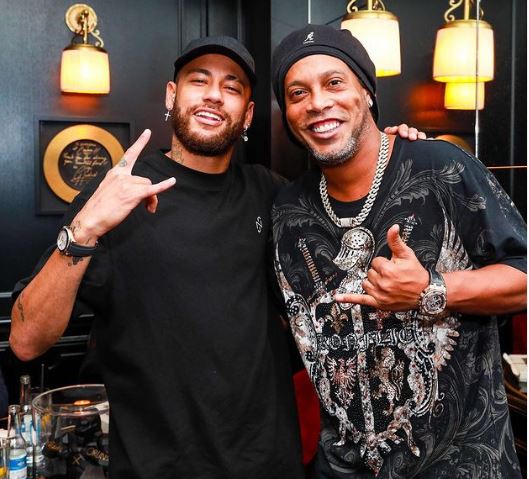 "He would still find a party and enjoy himself long into the night.

"We loved him at Milan, but he hurt himself and his career, never worried who saw him."

After leaving Milan to join Flamengo, it's even claimed Ronaldinho insisted on having a 'nightclub clause' in his contract – allowing him TWO blowout sessions per week.

Another former team-mate of Ronaldinho, Patrico Rubio, has revealed that the Brazil legend would 'hop onto his private plane after matches' to party in Cancun.

The ex-Queretaro forward, who played alongside the 2002 World Cup winner in Mexico, admitted he 'never saw him train on Mondays'.

For his 26th birthday bash, he infamously partied in a Barcelona nightclub until 6am.

His 32nd, which lasted five days and cost tens of thousands of pounds, took place at a luxury hotel in Rio de Janeiro, Brazil.

But party-loving Ronaldinho spent his 40th birthday behind bars – a stark contrast to some of his almighty benders down the years – following his arrest for the alleged use of forged passports in Paraguay.