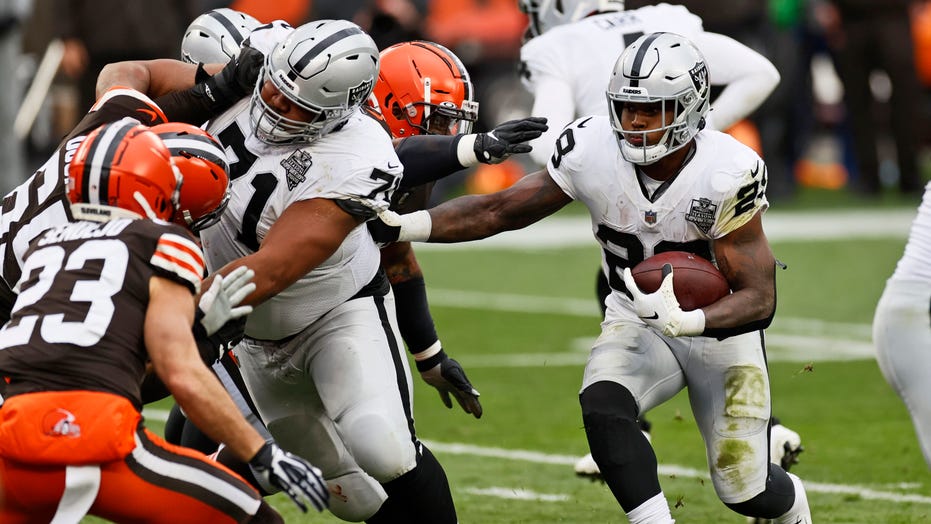 The NFL is making major coronavirus protocol changes, including team facilities shutting down for two days after games; NFL Hall of Fame quarterback Brett Favre weighs in on ‘Fox and Friends Weekend.’

The mischievous Raiders running back sent fantasy football managers into a tailspin after posting an Instagram story saying he would not play in the team’s Week 14 home game against the Colts despite being declared active.

“Sorry guys I’m not playing today,” Jacobs wrote on his story with fewer than three hours to kickoff.

The 22-year-old was listed as questionable all week after missing Week 13 vs. the Jets with an ankle sprain. He appeared to be all systems go, however, and was removed from the Raiders’ injury report prior to the game.

“A lot of hot fantasy owners,” Jacobs wrote via a second Instagram story, which included tiny text at the bottom with a middle finger emoji.

The news was especially consequential with most fantasy leagues in the first round of the playoffs. Jacobs, who was the Raiders’ first-round pick in 2019, is a difference-maker in fantasy football: The Alabama product has tallied 831 rushing yards on 219 attempts, nine touchdowns and has caught 30 of 39 targets for 200 receiving yards this year. He is the seventh-best running back this season in half-PPR scoring and the 11th-best on a per game basis.

To add to the confusion, Raiders beat writer Vincent Bonsignore of the Las Vegas Review Journal (among others) reported that Jacobs was dressed and participating in pregame activities.

“Raiders’ RB Josh Jacobs appears to have been joking with the fantasy community and is now going through pre-game warmups,” ESPN’s Adam Schefter wrote in response.

Jacobs indeed participated in the game despite the earlier social media misdirection. He saw 13 carries for 49 yards and caught three of five targets for 25 yards opposite the Colts’ stout run defense, good enough for 8.9 points in half-PPR scoring.

The Raiders lost 44-27 and drop to 7-6 on the season as they vie for the last AFC wild-card spot. The Colts move to 9-4 and are tied for first place in the AFC South with the Titans.