Panic has set in on many American college campuses in the midst of the pandemic, and athletic departments, having completely sold their souls to their football programs, are taking out their frustration on a most unusual series of targets: their swimmers, their gymnasts, their runners, their volleyball players.

Trying to save a buck in difficult financial times, athletic directors around the nation are slashing their men’s and women’s Olympic sports rather than asking their football programs to go without, say, a third-string punter or new carpet in the weight room.

How silly of me to even write such a sentence, knowing football is so important financially to athletic directors and university presidents that many of them are willing to stake their careers on playing it in this season of COVID-19 and hoping they don’t kill anyone in the process. 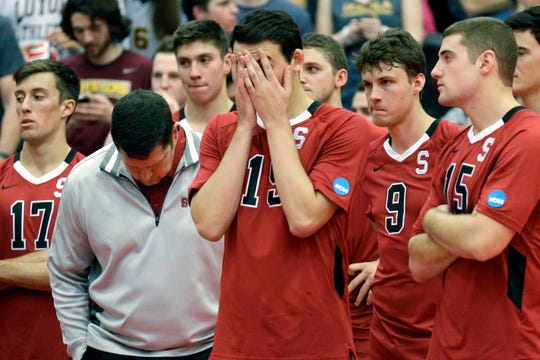 Men's volleyball was among the 11 sports cut by Stanford in July. (Photo: Nam Y. Huh, AP)

That’s a roll of the dice for the ages, but that’s not all they’re up to.

Stanford cut 11 varsity sports over the summer. Iowa and Minnesota eliminated four each. William & Mary, which isn’t playing football this fall, cut seven sports, but the uproar was so severe that the person wielding the ax, athletic director Samantha Huge, resigned Tuesday. Another 20 schools, give or take, have eliminated at least one sport.

Pruning a non-revenue sport or two or 11 is both awful and short-sighted. These are decisions university leaders immediately say they regret, but that’s not even the worst of it. By eliminating these sports and driving away these student-athletes, they are weakening their university community by getting rid of the best among them.

What, exactly, is the mission of a university? In our sports pages and on our sports sites, we focus quite a bit of attention on winning football games, but for many on college campuses, that isn’t exactly the goal of university life. Ideally, the higher education community is a patchwork of talents and interests, driven by a diverse student population – and by diverse, I don’t mean having both a right-handed and left-handed quarterback.

Those young people who lost their teams, and the chance to play for their schools, more than likely were engaged students and on track to graduate on time, then move on to successful careers. It’s fairly certain a student-athlete like that would have given back to his or her athletic department and school in ways big and small for the next 50 to 60 years, school pride being a central theme to their athletic existence.

Some of those students come from other countries, adding to the richness of the campus experience for everyone around them. Instead of valuing all of these young people, their universities told them to get lost, apparently to save pennies on the dollar – most of the eliminated programs cost less than $1 million annually – with the convenient excuse that we’re all in the middle of a pandemic so everyone has to skimp here and there.

At William & Mary, though, the university community has risen up for a fierce fight to save the 118 athletes and 13 coaches affected by the elimination of the seven sports. The athletic director is gone, while alumni from those sports are aggressively campaigning for the programs’ reinstatement.

In other words, the athlete alums are the very people William & Mary should have known they would be: totally engaged, looking out for their school, fighting for those who came after them, the kind of people they should never want to lose.