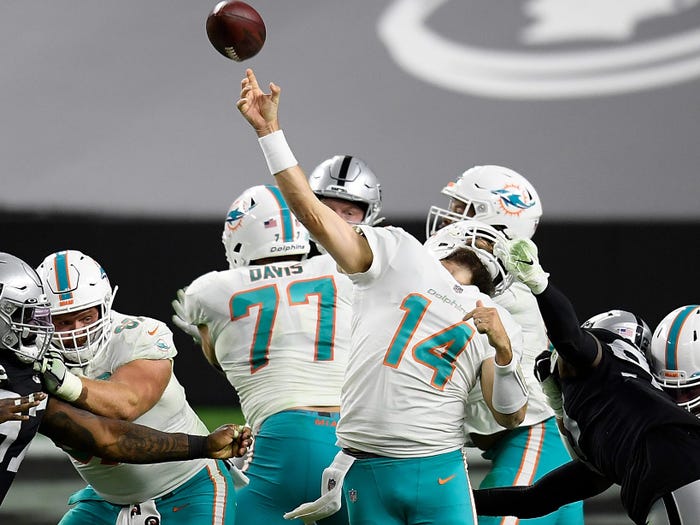 Ryan Fitzpatrick led the Miami Dolphins to an unbelievable comeback win against the Las Vegas Raiders on Saturday night.

After a whirlwind final few minutes, Fitzpatrick saved the game for the Dolphins when he connected with wide receiver Mack Hollins on the sideline with just seconds remaining, despite being dragged to the ground by his facemask by a defender.

Between the completion and the penalty yards, the Dolphins were in a position to score the game-winning field goal just before the clock expired.

Fitzpatrick's throw only became more impressive upon repeated viewings, and NFL fans on Twitter quickly compared the throw to the infamous no-look passes of Patrick Mahomes.

While some fans seemed concerned Fitzpatrick wouldn't get the credit owed to him for his miraculous throw, Patrick Mahomes himself weighed in to acknowledge that a new king of the no-look pass had been crowned.

"I know I'm late but best no look pass of all time," Mahomes wrote on Twitter.

Mahomes has stunned NFL fans with several incredible no-look throws over the course of his NFL career, but none of them have been quite as wild as Fitzpatrick's miracle on Saturday.