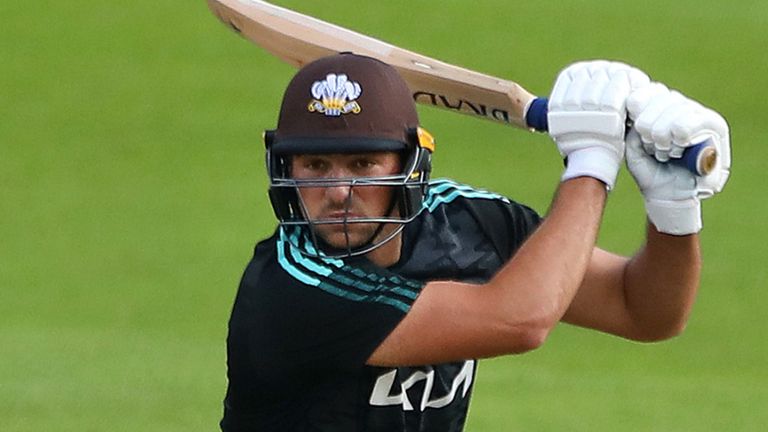 Alex Lees continued his superb form to help Durham book a home knockout tie in the Royal London Cup with victory over Worcestershire, while Surrey’s Tim David hit a 55-ball century against Warwickshire to keep their hopes alive.

Durham’s 46-run win over Worcestershire ensures they are guaranteed a top-two finish in Group Two, while it is a little more open in Group One, where Surrey’s seven-wicket thrashing of Warwickshire moved them up to third.

Opener Lees struck an unbeaten 126 in Durham’s win over Essex on Sunday and he followed that up with a fourth consecutive innings of fifty or more at New Road.

Lees was unable to reach three figures again though, bowled for 93 by Adam Finch (2-54), but six maximums in David Bedingham’s 41-ball 66 saw the away side post 289-9 batting first.

Early wickets for Paul van Meekeren (3-45) and Liam Trevaskis (3-38) put Worcestershire on the back foot and although Jake Libby hit 76, the hosts were eventually dismissed for 243 in the 46th over.

Durham remain top of Group Two, while Essex are second after a 97-run victory over Sussex helped them qualify for the knockout phase with one group fixture left to play.

Jack Plom, another to progress through the age groups, made early inroads on his way to figures of 3-52 before veteran Ryan ten Doeschate picked up 4-34 to bowl out the visitors for 224.

Victory for Tom Westley’s side away to Lancashire on Thursday will earn them a home semi-final.

Over in Group One, fireworks from Singapore international Tim David kept Surrey in with a shout of a knockout berth after they jumped up from sixth to third with a convincing win over Warwickshire at The Kia Oval.

David smashed nine boundaries and a massive 11 sixes on his way to an unbeaten 140 from just 70 deliveries as Surrey chased their target of 269 in just 39.4 overs.

Earlier, leg-spinner Cameron Steel (4-34) and fast bowler Conor McKerr (4-64) shared eight wickets to restrict the visitors to 268-9 after they elected to bat first.

If Surrey beat Derbyshire on Thursday they will leapfrog Nottinghamshire and go through to the knockout stages.

In Grantham, Nottinghamshire did secure a two-wicket win over Northamptonshire to conclude their group stage campaign, but they’re still left sweating on results elsewhere in Thursday’s final round of fixtures to see if they progress.

A five-wicket haul from the brilliant Liam Patterson-White (5-19) first skittled Northants for 210, while Ben Compton – the grandson of England great Denis Compton – then struck 71 in reply, though regular wickets continued to fall and Notts ultimately inched over the line with two balls to spare.

Finally, in Taunton, Somerset and Leicestershire produced an entertaining affair, with the away side coming out on top by four wickets as they chased down 327.

Captain Lewis Hill led from the front with 107 and was well supported by Louis Kimber who struck 85 to help Leicestershire triumph in the 45th over, placing them sixth in the table but still in with a shout of finishing in the top three.

Somerset, who dropped from third to fifth, were unable to build on George Bartlett’s maiden List A century in their total of 326-7 and it leaves everything to play for ahead of Thursday’s final day of group matches.