The Clippers mortgaged their future for Kawhi Leonard and Paul George, and the superstar duo fell flat in the biggest moment of the season 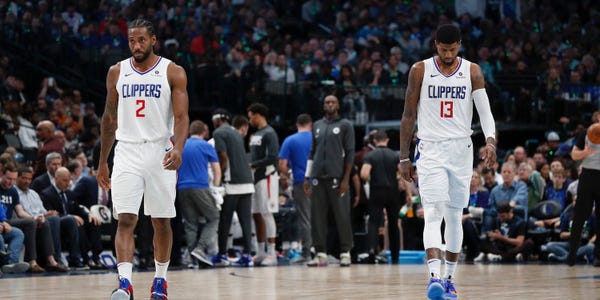 The huge price the LA Clippers paid to acquire Paul George made them uneasy. They have said as much.

However, the Clippers agreed to pay the whopping price because getting George also meant getting Kawhi Leonard, the most coveted free agent in 2019, who told the Clippers he wanted to play with George. The Clippers sent three first-round picks, three pick swaps, promising second-year guard Shai Gilgeous-Alexander, and forward Danilo Gallinari to the Oklahoma City Thunder in exchange for George.

Clippers coach Doc Rivers told The Los Angeles Times in September that he had to convince Clippers owner Steve Ballmer that the price they were paying was for two superstars.

"Steve Ballmer was nervous about the picks," Rivers said. "I said, 'Steve, you keep saying six picks for Paul George is insane, but you're saying it wrong. It's not six for Paul; it's six for Paul and Kawhi. So three for each. I would do that.' You have to look at it in those terms."

Surely, then, the Clippers expected better from their superstar duo than what they received Tuesday in a stunning 104-89 Game 7 loss to the Denver Nuggets in the second round.

Leonard and George combined for just 24 points on 10-of-38 shooting. With the game very much still in reach in the fourth quarter, the two stars shot 0-of-11 from the field and had 3 turnovers.

The abrupt exit of the Clippers ends what was largely a miserable postseason for George. Over 13 playoff games, George averaged 20 points, 6 rebounds, and 3 assists per game, but shot just 39% from the field, 33% from three, and averaged 3 turnovers and nearly 4 fouls per game.

George publicly admitted to struggling with the Disney bubble's confinements, saying he spoke to a psychiatrist to deal with anxiety.

In general, the bubble never benefitted the Clippers. A team that struggled with injuries and continuity during the regular season had several players arrive late to the bubble. Also, key players like Lou Williams, Patrick Beverley, and Montrezl Harrell all left the bubble for personal reasons and missed games while quarantining upon their return. None of them played to their usual standard in the bubble.

And while Kawhi Leonard was dominant throughout the bubble, his Game 7 performance left much to be desired. The Clippers may have to ask themselves how to better construct a roster around Leonard to lighten the ball-handling and playmaking he had to do. Leonard stepped up his playmaking game throughout the season, but the Clippers' lack of a traditional point guard may have put too much offensive pressure on Leonard.

They may also have to weigh the benefits and risks of Leonard's "load management" program, especially if missed games come at the cost of repetitions during the regular season. Leonard's regular-season injury management is supposed to help him level up during the playoffs, and he largely did, but not when it mattered most.

The clock begins ticking on an uncertain future

The 2019-20 Clippers are being compared to the 2010-11 Miami Heat, the first year of the LeBron James-Dwyane Wade-Chris Bosh Big Three. Both teams were title-favorite, super-teams who came up short of a championship.

However, there are a few clear differences. First, that Heat team made the Finals (losing in six games).

Second, the Heat signed those three stars to long-term deals in free agency and knew that core was coming back for at least three more seasons.

The Clippers do not have that security. They traded a treasure trove of assets for George. Leonard only signed a three-year deal last summer.

Given the uncertain climate for next NBA season and the effects of the pandemic, both players may opt in for the 2021-22 season. But the Clippers are on the clock either way.

There are other key areas to address. Harrell and Marcus Morris (who the Clippers also traded a first-round pick and a pick swap for this season) are free agents this offseason. The Clippers can pay both players more than other suitors, but it's worth asking if they should. Both players should easily earn eight figures per year on their next deals. Harrell looked to be in line for a deal worth over $20 million per year before his poor playoff showing.

Keeping Morris and Harrell would lock the Clippers into their main core for the coming seasons. Depending on your view, that means either securing a very good championship contender or a second-round disappointment.

But because of the massive price the Clippers paid for George, they have few other means of improving. They won't have cap space to replace Harrell or Morris in free agency. Trading key rotation players like Williams, Beverley, or Landry Shamet might get some value in return, but not enough to meaningfully improve the team.

Barring something drastic, the Clippers seem more likely to double-down on this team and hope that continuity will take them to the next level. After all, this was a team that led the Nuggets by double-digits in Games 5 and 6 before letting the leads slip away.

But close isn't good enough. Despite George telling reporters this season wasn't championship-or-bust to the players, the Clippers didn't trade all of their assets to come close to a championship. They traded for George and Leonard and the chance to win multiple championships.