Home » Sport » The Warriors may hold the key to the NBA draft at No. 2 — here’s what experts think they might do 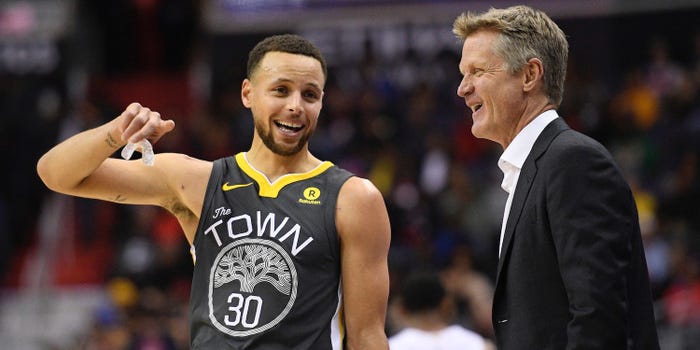 The Golden State Warriors may be the X-factors of the 2020 NBA draft.

The 2019-20 season quickly went off the rails for them, with no Kevin Durant, Klay Thompson, and virtually no Stephen Curry, who broke his hand four games into the season.

The team that had dominated the NBA for five years went 15-50 and acquired the second overall pick in the 2020 NBA draft.

Now, however, the Warriors are healthy again and looking to contend in the playoffs. Numerous reports say the team is shopping the No. 2 pick to acquire veterans that could help them win now. If such a package emerges, they could shake up the whole draft.

If the Warriors can't find a deal they like, they may keep the second pick and draft a player who helps them win now.

We consulted mock drafts from ESPN, The Athletic, The Ringer, Bleacher Report, Sports Illustrated, SB Nation, and USA Today, as well as rumors and reports about what the Warriors might plan to do. Here's what the experts think:

The Warriors draft James Wiseman with the second pick

Six of the mock drafts we consulted have the Warriors picking Wiseman, a 19-year-old center from Memphis, with the No. 2 pick.

The Minnesota Timberwolves have the No. 1 pick (which they are also shopping) and don't need Wiseman since they already have Karl-Anthony Towns. The Wolves are reportedly between LaMelo Ball and Anthony Edwards, two guards.

The Warriors have a glaring hole at center, and though they might prefer veteran help at the position over the raw Wiseman, he is nonetheless the best fit for them. As his shooting and defense come around, he may also help bridge the gap to a new era for the Warriors once Curry, Thompson, and Draymond Green get older.

Wrote The Ringer's Kevin O'Connor: "There is no better place for Wiseman to address his weaknesses than Golden State. During the early stages of his NBA career, Wiseman could fill the rim-running, rim-protecting role that JaVale McGee played for years, but he'd hopefully evolve into much more once his shot creation and floor awareness improve."

An outside chance at LaMelo Ball or Anthony Edwards

While Ball is arguably the top prospect that fits the Warriors' needs the least, it would also fit the Warriors' M.O. to select the best player available, regardless of fit. Ball could hone some of his skills and cut out the flaws that worry teams under the Warriors tutelage and eventually become their lead playmaker far down the line.

SB Nation's Ricky O'Donnell projected Wiseman to go the Warriors but suggested Edwards might be the better fit due to his skill set, athleticism, and high ceiling.

The Warriors trade down for a later pick and veteran help

It's unclear what offers the Warriors might have for the second pick.

The Warriors were rumored to be interested in Jrue Holiday, but he was traded from the New Orleans Pelicans to the Milwaukee Bucks on Monday.

According to Bleacher Report's Jonathan Wasserman, if the Warriors trade down, they could also look at players such as Israeli forward Deni Advdija, Iowa State guard Tyrese Haliburton, or Florida State's Devin Vassell.