The 13-year-old has been through so much already in her young life. 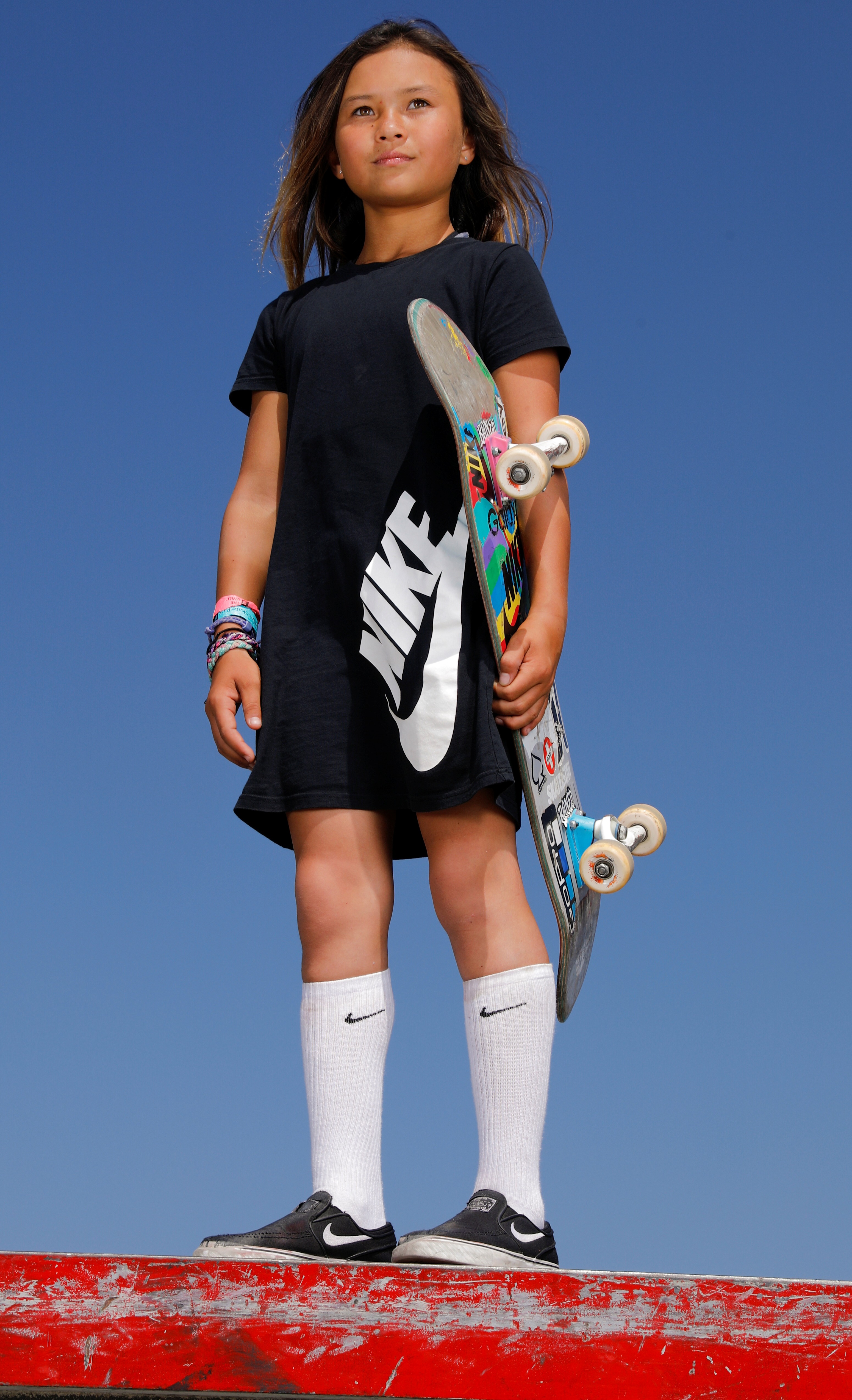 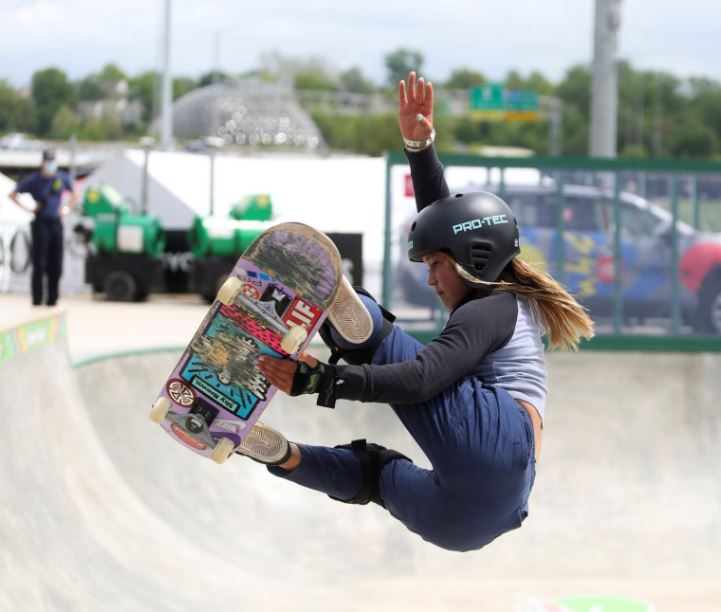 Last June, Brown posted a  slow-motion horror movie from a California hospital bed, in the aftermath of a terrifying crash.

During a training session, Brown lost contact with her board, falling more than 12 feet in the gap between two half-pipe ramps and smashing into the concrete below.

It left her with a fractured skull and numerous fractures in her left arm and wrist, while dad Stewart revealed it was a potentially-fatal accident.

Sitting up in bed, with her black eye closed and arm in a cast, Brown told the world: “I don’t usually post my falls or talk about them because I want people to see the fun of what I do.

“This was my worst fall. But it’s OK to fall sometimes.

“I’m just going to get back up and push even harder.”

A year on, that determination is even clearer. As is her courage.

Brown, who, at 13 years and 23 days will beat the record set by swimmer Margery Hinton at the 1928 Amsterdam Games by 21 days, told SunSport: “It was a pretty bad accident. 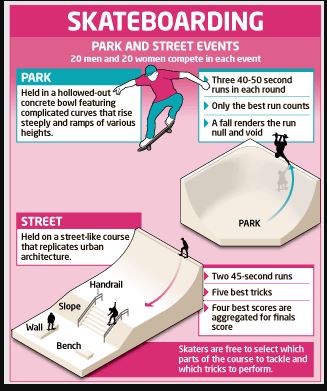 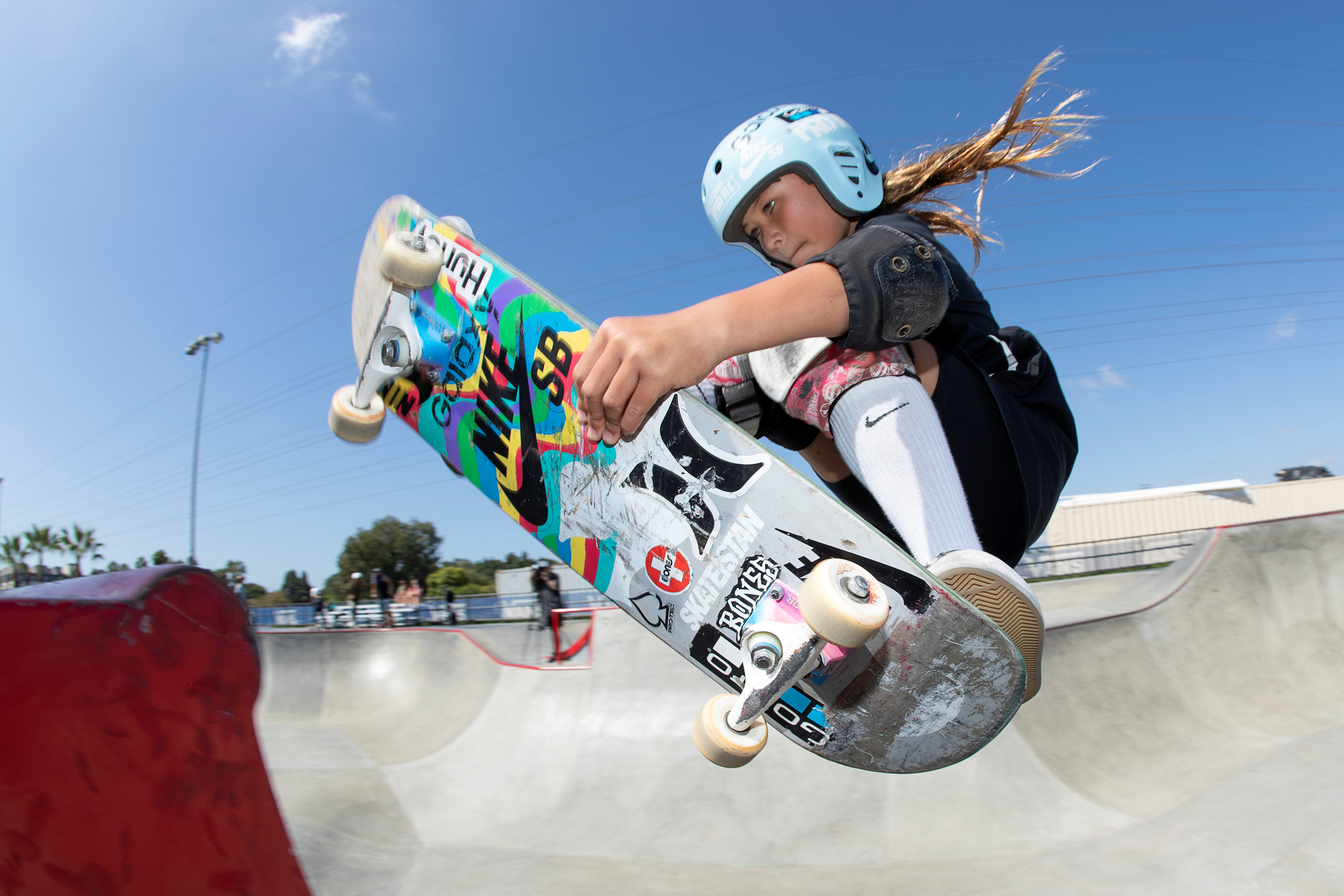 “I was knocked out for 12-16 hours. It was a really bad time. I couldn’t see my brother the whole time, only one of my parents could come in and it was really tough.

“But I recovered really fast after that.  Getting back on the board, I wasn’t scared at all, just excited.

“I wanted to get back on the board. I felt I was stronger after that. I wanted to do more things. I did the mega-ramp after that.”

It is either the fearlessness of youth or, more probably, a sign of Brown’s utter focus on Olympic glory.

Then again, the teenage superstar of the most  talked-about addition to the Olympic programme has never hidden away from trying to fulfil her destiny.

Brit father Stewart moved to Japan where he met Sky’s mother Miko and settled in Miyazaki, 550 miles from Tokyo and where she was born in 2008, before splitting her life between her birth nation and the USA.

Brown’s fame in the US grew when she appeared in  Dancing with the Stars: Junior — their version of Strictly Come Dancing — and her accent is, at best, transatlantic.

Yet dad’s heritage makes her  eligible for Team GB and Sky explained: “My dad is English and my mum is Japanese. 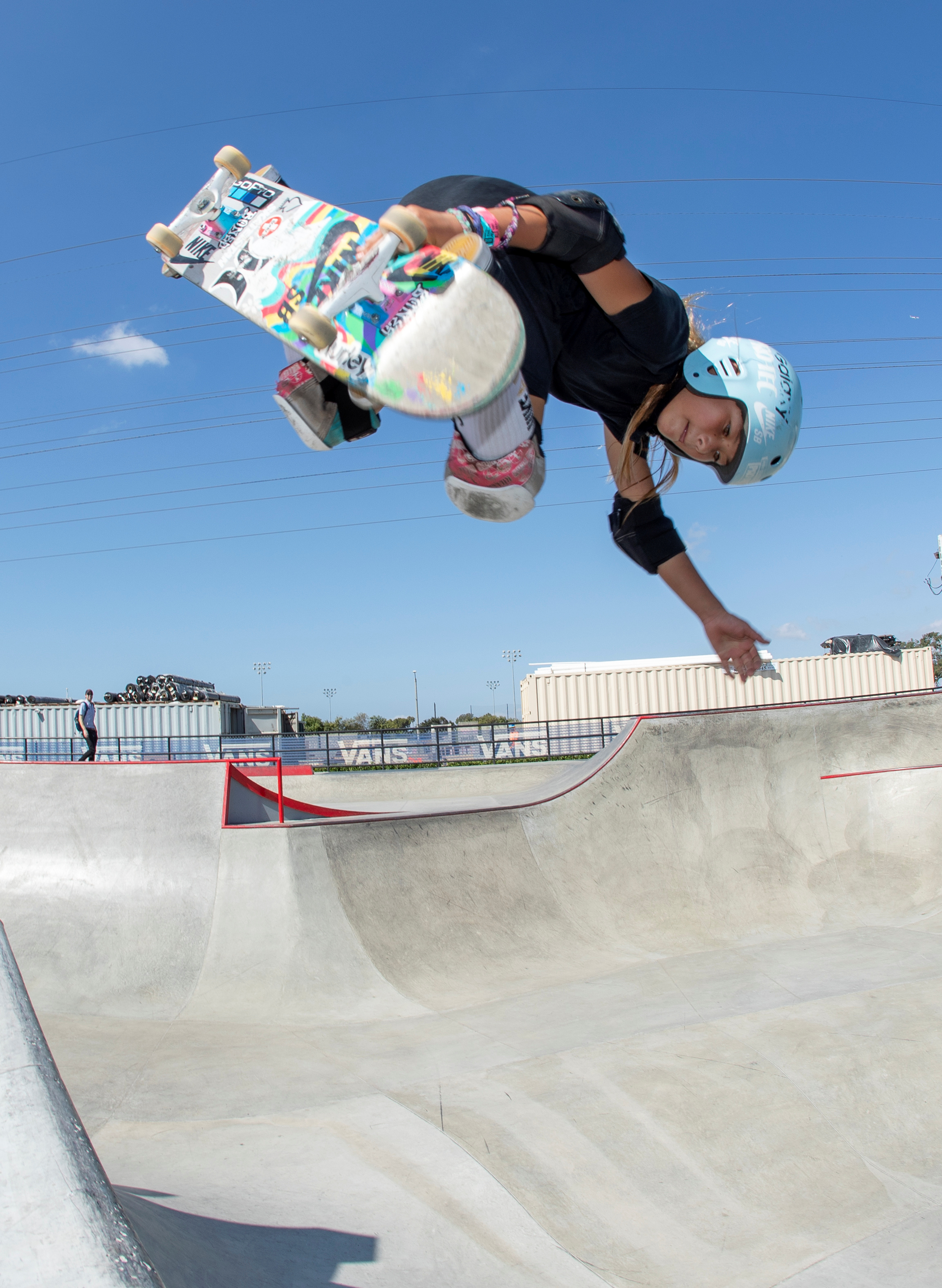 “I think it’s very cool that I get to be competing for Great Britain and to be in my home town and country because I grew up in Japan. I feel a bit of both cultures inside me.”

There is an infectious enthusiasm about Sky, too.

She is enjoying the “cool” and “awesome” limelight, while she even helped persuade Team GB bosses to tweak some of their planned kit designs. Sky revealed: “I told them I didn’t like it because I like to wear leggings when I’m skating. I love this T-shirt now.

“They sent me lots of clothing, four huge suitcases. And I got some skirts which I’m really happy about. I like this T-shirt. It’s cool.”

For those not entirely aware of how skateboarding works, Sky is pretty good as an explainer as well.

“Park is like an empty swimming pool, with a hump in the middle you can jump over. Street is more like stairs, rails and ledges. I do park. They’re pretty different.

“You get 45 seconds on a run and can do as many tricks as you want.

“The more you fit in the better but you have to make a good line and make the whole thing good, not think about one trick.

There are so many little girls but I could be the little one going big. Then they will think they can do it as well and show the world how much fun and how great skateboarding is.”

“I just think about going high, doing my tricks, getting my line and having style.”

And she hopes her feats in Tokyo will impact on girls her own age and even younger.

She said: “If you go to a skatepark it is mostly boys there. Maybe some girls are scared to be the only ones there doing it and be judged by the boys.

“But watching the Olympics, seeing how many girls are doing the sport and how good and fun it is, they’re going to want to do it as well.

“Everyone from all around the world is watching.

“There are so many little girls out there but I could be the little one going big.

“Then hopefully they will think they can do it as well and show the world how much fun and how great skateboarding is.”

MADE IN MANHATTAN… OUR WISE
OLD HEAD BOMBETTE MARTIN, 15

WITH the attention on whizkid Sky Brown, it is easy to forget the “old” hand in GB’s first Olympic skateboarding team is only 15.

But while Bombette Martin has an accent  straight out of the Big Apple, her words tell you she is all about Birmingham.

Bombette grew up in Manhattan, where boxer dad Jon “Bomber” Martin settled after just missing out on qualification for the 1996 Atlanta Games. 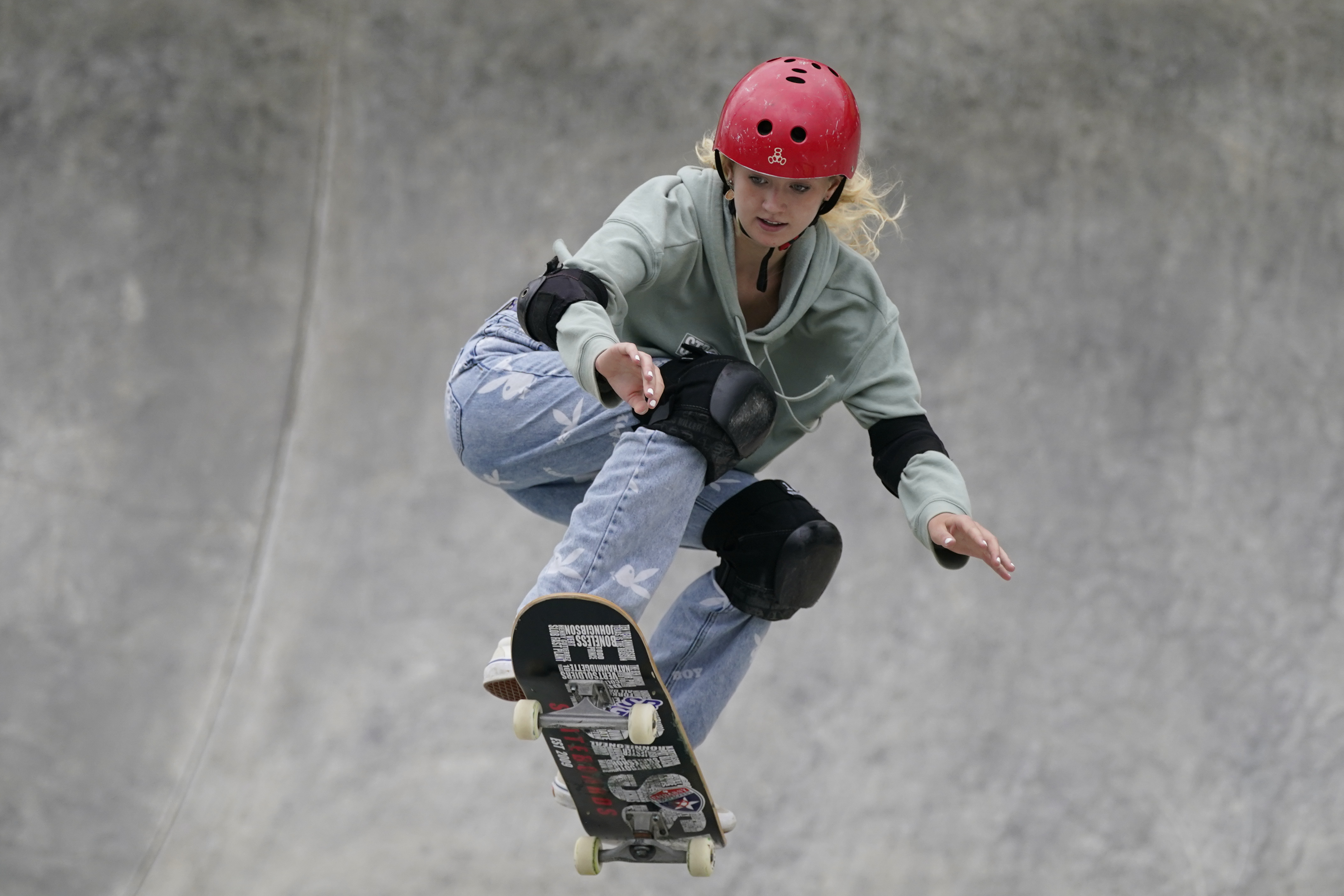 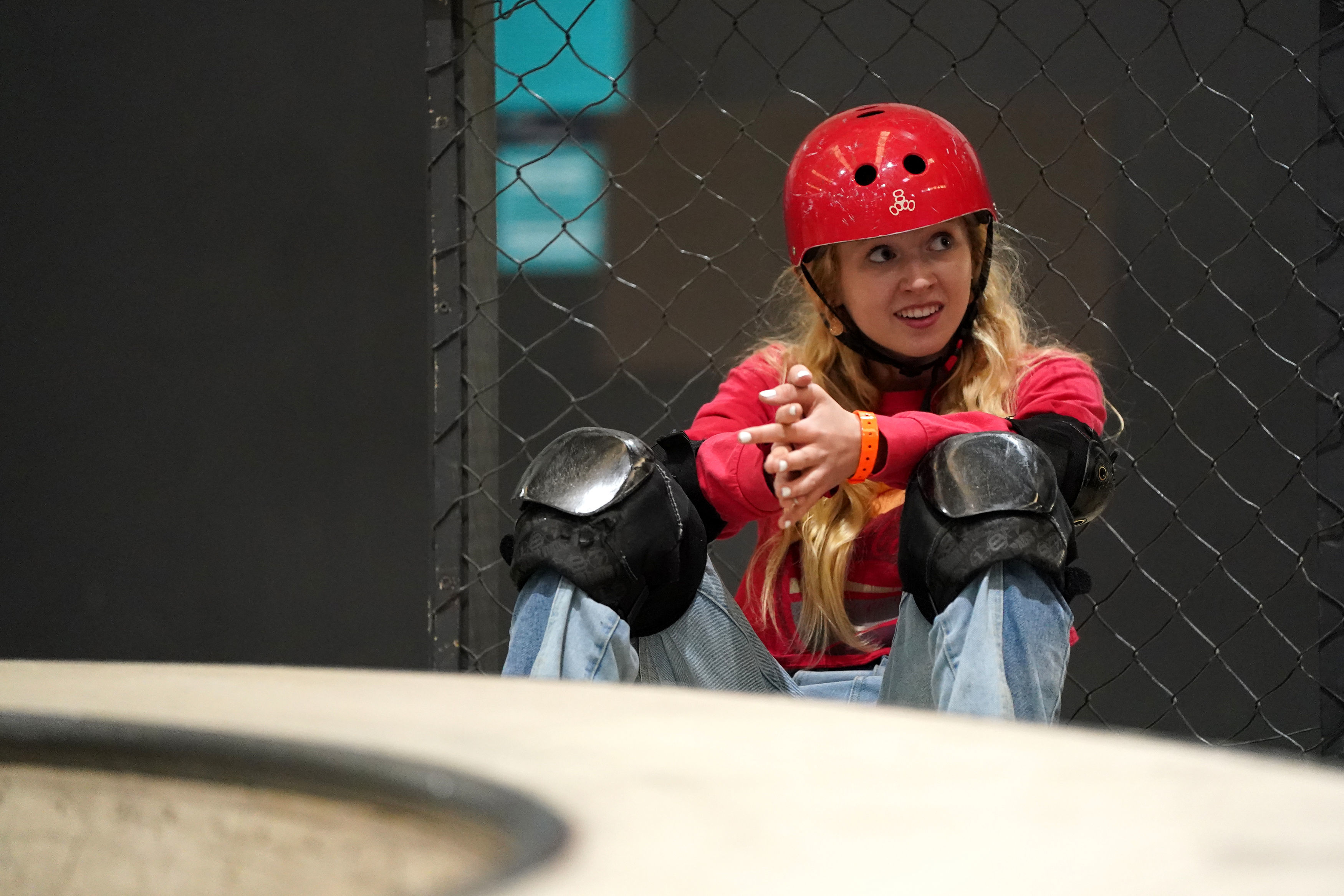 Jon grew up in Erdington and his daughter explained: “I feel half a New Yorker… and three quarters a Brummie! When I was growing up I spent a lot of time in Birmingham.

“Every memory I have is wonderful, spending time with my grandparents and cousins, taking my daily trips to the Bullring and running around the streets and back fields.

I grew up in New York but Birmingham is where my family is.” British champion Bombette suggested her dad is now “living vicariously” through her feats.

She added: “Dad was a very high-level boxer. Whenever I’m in trouble mentally he uses boxing analogies to try to explain things through boxing to me.

“The Olympics only started to become a dream after the world championships in 2019.

"Even then I was thinking maybe 2024. But since last summer I just wanted to do it.

“I  put so much pressure on myself. My parents tried to calm me down, told me not to worry and I didn’t have to go and they wouldn’t be mad if I didn’t.