Tokyo: Japanese newspaper Asahi Shimbun, an official partner of the Tokyo 2020 Olympics, called for the Games to be cancelled in an editorial on Wednesday, citing risks to public safety and strains on the medical system from the COVID-19 pandemic.

“We ask Prime Minister (Yoshihide) Suga to calmly and objectively assess the situation and decide on the cancellation of the event this summer,” the newspaper said in an editorial.

Much of Japan, including host city, Tokyo, remains under a third state of emergency that is widely expected to be extended beyond this month.

Poll after poll has shown the majority of the public is opposed to holding the Games this summer, concerned about tens of thousands of athletes and officials descending on a country that has mostly remained closed to foreigners since last year.

By early morning on Wednesday, “Decision to cancel”, taken from the title of the Asahi newspaper’s editorial, had garnered more than 21,000 tweets.

“Finally, one of the top sponsors – the Asahi Shimbun – has written an editorial for Olympics cancellation,” tweeted @KaiserAndDragon. 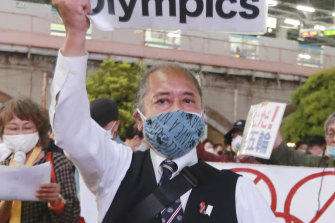 Demonstrators in Tokyo protest against the Games being held in Japan.Credit:AP

“When it comes to the Tokyo Olympics, we’re continuing to witness a cascade of calamities,” said Jules Boykoff, a professor at Pacific University in Oregon who has written several books on the Olympic Games.

“That complicates things for corporate sponsors,” he added. “Normally you benefit from the halo effect of the Games and it shines on your brand. But with Tokyo, it’s more complicated, because you could be associated with something that’s become enormously unpopular.”

Since the International Olympic Committee has the power to cancel the Games, a decision that one member said could be made as late as end-June, Japan would face hefty compensation costs if it pulled out now. That appears unlikely because revenue from broadcasting rights is generally much higher than ticket sales, and the IOC and various sporting federations won’t get paid until the Olympics actually take place.

“The lifeline for pretty much every international federation is Olympic revenue and broadcast monies,” Sebastian Coe, president of World Athletics, the global governing body for track and field, told CNN Sport this month.

Earlier this month, the 6000-member Tokyo Medical Practitioners’ Association called for the Olympics to be cancelled in a letter sent last week to Prime Minister Yoshihide Suga, Tokyo Governor Yuriko Koike, and Seiko Hashimoto, the head of the organising committee.

The letter was made public this week on the group’s website.

“We believe the correct choice is to cancel an event that has the possibility of increasing the numbers of infected people and deaths,” the letter said.

“Viruses are spread by people’s movements. Japan will hold a heavy responsibility if the Olympics and Paralympics work to worsen the pandemic, increasing the number of those who must suffer and die.”

A survey published by Asahi Shimbun on May 17 found that 83 per cent of respondents wanted the games cancelled or postponsed.

The Olympics are to open on July 23. The Paralympics follow on August 24. They are a financial imperative for the International Olympic Committee, which derives about 75 per cent of its incomes from selling television rights and another 18 per cent from sponsorship.