Giants captain Kim Green says social media trolls who targeted the team’s star recruit Caitlin Bassett for unfair criticism fired her team up for something special against a Collingwood outfit that was expected to trouble them. 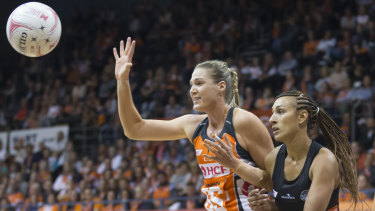 Bassett, who left the all-conquering Sunshine Coast Lightning at the end of last season to join a team that had lost three internationals, found her groove against the Magpies by drilling 40 of her 42 shots at goal – and it was spectacular.

It underpinned an inspiring 58-50 win by Super Netball’s sleeping Giants, who Green said kick-started their season after pledging to do what they could do to stop the criticism of Bassett.

“She has copped it the first few weeks from outside [the club],” said Green. “I was quite upset about that because I felt as though we weren’t doing enough [as teammates] to let her do her job.

“It was stuff on social media. [Bassett] hasn’t said a thing about it, but we all knew we had to rally and do our jobs better. I think we did that better today and she held her ground, she was strong.”

Bassett, who before Sunday’s victory had shot 63 from 75 in her first two matches, celebrated the commitment of her teammates.

“We can give ourselves a pat on the back,” she said. “Collingwood are a quality side and they fought back hard in that last quarter.”

After being forced to use the Giants opening two competition games to find her place in a new system after her pre-season was written off by a fractured arm, Bassett looked more at home working with in tandem with Jo Harten.

“I think you saw we were jelling really well,” she said. “It’s just about time and patience, it’s really frustrating because if I had’ve had a few months pre-season work with the girls we might have had a couple of different results in the first couple of games.

“Julie [coach Fitzgerald] has just said to be patient, it was always going to take time and we’re starting to see the result now.”

While Bassett’s shooting was a talking point, both she and Green praised the performance of their defenders including MVP, Amy Parmenter and Sam Poolman who dominated the court.

“Amazing, they were amazing,” enthused Bassett. “I was so pleased to see Amy get the MVP because she is the epitome of what a Giant is.

“She never surrenders, she chased down every ball and she was absolutely dogged and her hands helped Sammy in the circle, so it was great.”

The victory also extended the Giants head-to-head record against a Collingwood team that was expected to trouble them to 5-1.