Tyson Fury was sent to hospital because of a bloody cut that was so bad, it completely stained the referee's shirt

Tyson Fury escaped Las Vegas with a victory on Saturday but was sent to hospital because of a bloody cut that completely stained the referee’s shirt.

While the British heavyweight waits for his lucrative rematch against Deontay Wilder, tentatively scheduled for the first quarter of 2020, he has been keeping active.

He beat Tom Schwarz with ease as he knocked the German out in just two rounds earlier in the summer, but was made to labor for his win against Swedish southpaw Otto Wallin this weekend.

This is because Wallin opened a cut in the third round that was so bad it left Fury’s face a bloody mess, and the referee Tony Weeks needing a change of shirt.

Yahoo Sports fight reporterKevin Iole tweeted that Fury was absent from the post-fight press conference as he was taken to hospital. This wasconfirmed by BT Sport, which broadcast the event in the UK.

See the impact of the cut below:

Read more: English travellers like Tyson Fury are taking over boxing, but there’s a reason they fight nothing like Brad Pitt’s character in ‘Snatch’ 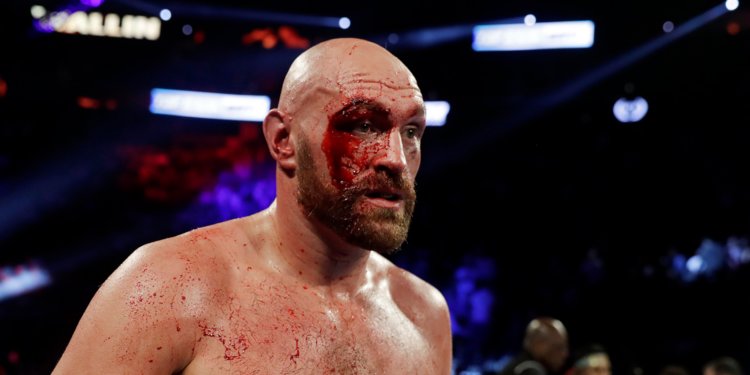 The impact of the cut.Photo by AP Photo/Isaac Brekken

He then reiterated his desire to fight Wilder next, the American he outboxed but was knocked down twice by, in a disputed draw in 2018.

On the ESPN broadcast, Fury said: “Deontay Wilder … I want you next, bum!”

He added: “That is my fifth fight back, and puts me in good stead for the big boy, the ‘Bronze Bomber,’ the big dosser. He’s next, February 22nd. Let the cut heal, enjoy myself, and get some time to relax with my family.”