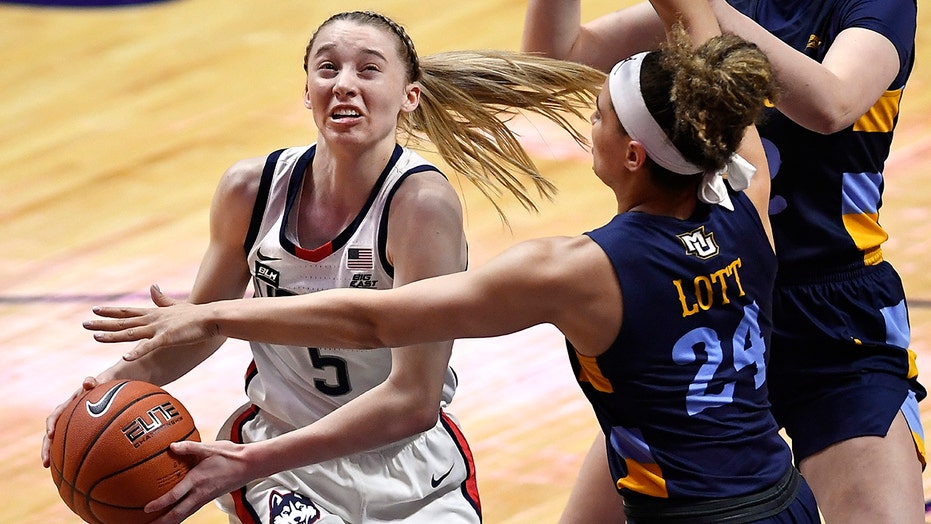 Paige Bueckers was on the cover of Slam Magazine before stepping on the court as a member of one of college basketball’s illustrious programs – the UConn Huskies.

She proved in her freshman season with the Huskies that she was the real deal after all the hype around her coming out of her senior season at Hopkins High School in Minnesota, which included the magazine cover, the 2019-20 Gatorade Female Athlete of the Year award, and the 2020 Naismith Prep Player of the Year award, among other accolades.

Her play caught the attention of some of UConn legends from the past, including Rebecca Lobo, Sue Bird and Breanna Stewart. All of those players helped raise UConn’s prominence in college basketball when it was Pat Summitt’s Tennessee Lady Vols dominating championship after championship.

Bird said she couldn’t have imagined the pressure Bueckers felt when she first started with the Huskies.

“Her freshman year is so unlike anybody else’s freshman year,” the WNBA star told ESPN. “It could be intimidating for a kid. She clearly doesn’t seem intimidated.”

Bueckers is in line for the national Player of the Year award and helped UConn grab the No. 1 seed in the upcoming NCAA Women’s Basketball Tournament.

“What she’s done this year, in such a year of unknown, is actually ridiculous,” said Stewart, who was also touted as a freshman coming into UConn and led the Huskies to four national titles. “She doesn’t look like a freshman, that’s for sure. Even when I look back on my freshman year, I had moments where it was like, ‘Stewie is a freshman.’ Paige has the confidence in leading her team as a freshman, which is crazy in itself.”

Bueckers averaged 19.7 points and 4.5 rebounds in her first season. She scored a career-high 32 points in a February win over St. John’s and played all 45 minutes in a potential NCAA championship preview against South Carolina earlier this season, which the Huskies won 63-59 in overtime.

UConn is poised to be one of the Final Four teams contending for the title come April.